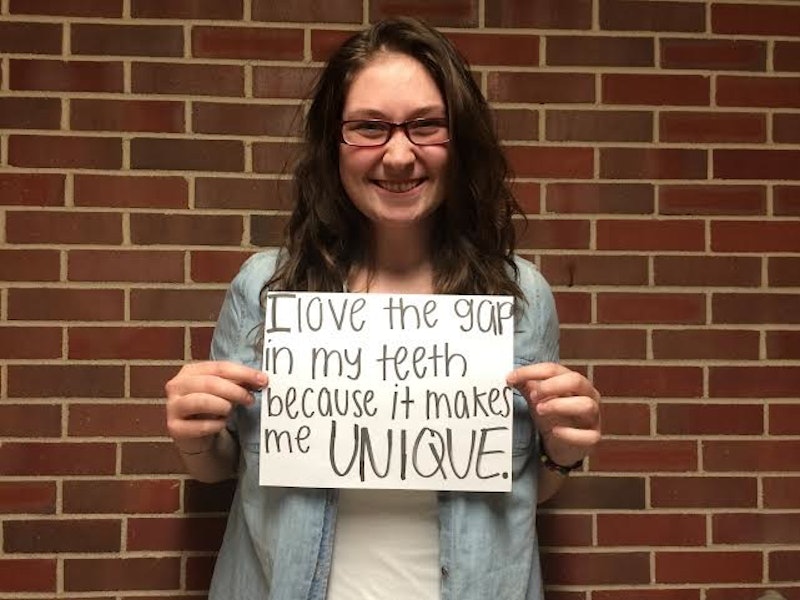 Michael Strahan made it onto Barbara Walter's 2014 Most Fascinating People this past year. In his interview, Strahan openly discussed the prominent gap in-between his two front teeth and how he embraced his imperfection. The football pro turned TV host admitted to once wanting to get rid of his gap, but ultimately decided his smile, however flawed it is deemed by Hollywood, is a part of his identity.

Strahan told Us Weekly that he made it as far to sitting in the dentist's chair, having the doctor make mock-ups of what his new smile could be, but decided he didn't need to be "fixed." He admitted to feeling pressured as a young athlete for the New York Giants to look perfect.

"I made the conscious effort to say, 'This is who I am,'" he explains of why he didn't and won't to close up his teeth. "I'm not perfect. I don't want to try to be perfect," Strahan told the magazine.

Of course, Strahan is not the only celebrity that has a beautiful gap in his teeth (ahem Madonna, Anna Paquin, Woody Harrelson, Seal), but he's also not the only human to "mind the gap." I reached out to many coworkers, friends, and friends of friends to share why they love the gap in their teeth. Three women, all who have experienced physical or mental pain from their gaps, share why they ultimately decided to love their gaps, instead of "fixing" the gap.

Hannah is a junior at Ball State University, where she is studying Social Work. Hannah admitted to me that it took her a lot to love the gap in her teeth, but she loves her smile now. "I've struggled with it in the past because I've been made fun of for it a lot, but it makes me unique, and I do like it," Hannah said.

Tanesha is a freshman, also at Ball State University. She relies a lot on her faith and finds comfort in the fact that she believes her gap is all a part of her God's plan. "I am fearfully and wonderfully made!" Tanesha says.

Rachel is a fellow Bustler, who is actually missing two teeth. Although her gap can't be seen from the front of her mouth, she endured painful gum surgery because one of her teeth had a hole. When her periodontist went into the surgery, he actually realized two of her teeth had holes and needed to extract them both. Although she didn't suffer from societal pressures because of her gap, Rachel had to completely change her diet because she can't chew hard things.

She considered getting the teeth replaced, but ultimately decided the cost ($3,000!) wasn't worth it. She loves her gap now and loves that family calls her lack of teeth "pirate parts," like she lost her teeth to scurvy. "No one notices it, and even when they do it's not like it's gross. I actually think it's pretty cool, especially when people ask, 'Uh, why are you eating funny?' and then I can show them exactly why. I'm proud of my gap," Rachel says.