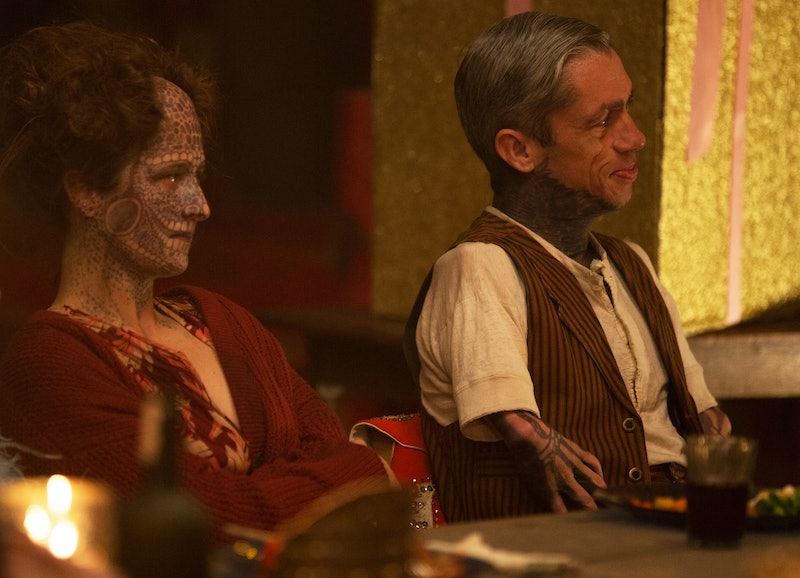 We're in the final stretch, American Horror Story: Freak Show fans. And thanks to the released synopsis of the AHS: Freak Show season finale "Curtain Call," we may have a few ideas of what's coming down the line. (Thank you for that, FX.) But first, we have to start with Wednesday's episode "Magical Thinking" which marked the third-to-last episode in the anthology series. Now, the season is officially wrapping up its loose ends.

In "Magical Thinking," we met the newest cast member of Elsa Mars' freak show. Chester (played by the magnetic Neil Patrick Harris) is a magician with a very unusual best friend — a super creepy ventriloquist dummy named Marjorie (portrayed by returning American Horror Story actress Jamie Brewer.) Though Chester clearly has a few screws loose — he believes Marjorie is alive and that she murdered his wife and her mistress — Elsa sells him her beloved freak show. But though Chester may hold the deed to one of the last remaining freak shows, no one is happy about it — least of all Dandy, who knows that Chester fooled around with his the two loves of his life, Bette and Dot. One thing is for sure: things are about to get realllll tense in Jupiter.

This Wednesday's episode, titled "Show Stoppers" will be the penultimate episode of the series, and it's guaranteed to set us up for the season's epic finale, which will air on Jan. 21 and is appropriately titled "Curtain Call." Here's the synopsis for the finale:

The Freaks rebel against new management. Dandy prepares for his debut performance. Elsa arrives in Tinseltown.

The synopsis reveals few things about this Wednesday's episode — and it hints of a few changes ahead.

The Dandy of It All

For one thing, Dandy is getting a slot in the freak show?! Considering that most of the performers believe he's a murderer (or, at the very least, suuuuuuper crazy) the fact that he gets his own slot is just a tad suspicious.

The person whose head is most likely on the chopping block in "Show Stoppers?" Chester — he's Dandy's romantic rival and clearly extremely fragile. Could Dandy push Chester over the edge — or even kill him — and claim the freak show for his own? We know that Dandy has plenty of cash on hand that buying out the freak show isn't without possibility.

The synopsis for "Curtain Call" also suggests that this is the episode in which Elsa gets her big sendoff to Hollywood. The question here is how — we know Stanley is a fraud and that he doesn't really have any connections in Tinseltown, and yet, we also saw in flash-forward episode "Orphans" that Elsa does become famous. (That is, we think that's the reality of the situation — it's plausible that the Time cover Pepper sees is a false projection of her own wishful thinking.) Is it possible that Elsa strikes it out on her own, and wins over the crowd without the help of Stanley? Perhaps — though it would be the happiest thing to happen on American Horror Story in four years.

"Show Stoppers" will set us up for one hell of a finale — let's hope that the show can wrap up all of the loose ends.