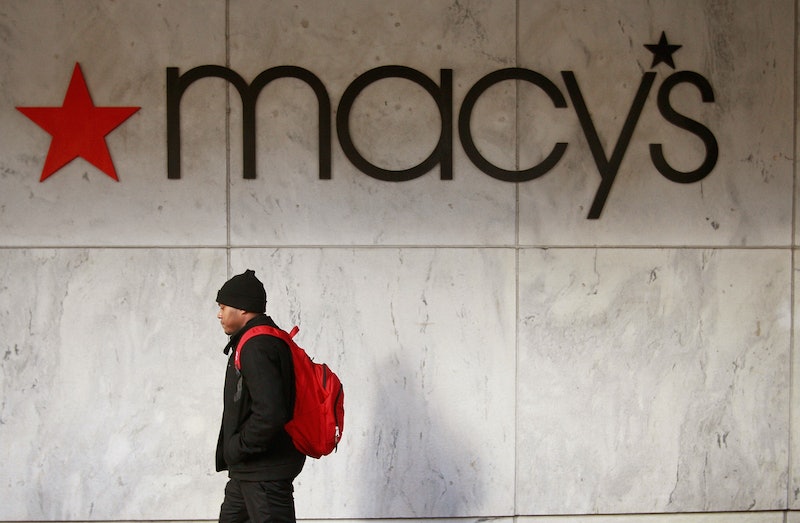 On Jan. 8, Macy's announced it plans to close 14 stores across the US in 2015, leaving many to wonder if this means the death of malls everywhere. The implications of Macy's clothing 14 doors across the country are tremendous. Although it doesn't seem like a massive number, the closings will affect two percent of the company's stores and will leave 1,300 people jobless.

The announcement came only a day before Obama announced that 2014 was America's largest year of job growth since 1999, with the U.S. adding 200,000 jobs every month in 2014. November, the final push to reach the headline, was the best month out of the year job gains. In addition, those who have experienced longterm unemployment (27 weeks+) declined by 1.1 million, but CNN reports the number is still alarmingly high.

Despite the good news on the economic front, the closings of many Macy's stores may mean the death of malls altogether. The Huffington Post surmised a list of 10 chain stores that plan to close a number of branches around the U.S. in 2015. Coincidentally, the stores closing are those typically in indoor malls instead of standalone or outlet malls.

I am from a small town in Indiana. We only have indoor malls. And since I was in junior high, I have seen my own town's local mall dwindle from a thriving place to hang on Friday nights to mostly a home for morning walkers.

CBS News reports that between 1956 and 2005, over 1500 malls were built. It was known as The Golden Age of shopping. But since 2006, there have been no new malls built in the U.S., bringing the Golden Age to an abrupt halt.

Many chalk up the change to a new Golden Age: the Internet. Now, we can shop online from wherever in the world our iPhone picks up WiFi. Retail Consultant Howard Davidowitz told Business Insider he predicts half of America's shopping malls will fail within the next 15-20 years.

Not to be Carrie Bradshaw, but I'm left wondering what that means for me? I am the proud owner of a disproportioned body and an iPhone. I personally do not enjoy online shopping for clothes, because I can't be sure the clothes will fit properly. Plus, I enjoy the experience of getting out of my house with friends and interacting with people willing to help me choose the best dress for my figure.

Davidowitz explains that the death of malls is slow, but painful. And once they do go down, it could take 8 years to restructure itself into whatever the building may be used for next, which could not necessarily be a new mall.

Until then, looks like I have to shop for the rest of my life if I plan to stay here.

More like this
Your Home Could Seem So Much More Expensive If You Tried Any Of These Cheap Tricks
By Dena Ogden and Sara Brown-Rigoli
Bath & Body Works' Summer Scents Are Extra Dreamy
By Paris Giles
Your Rosacea Skin Care Treatment Guide, Straight From Derms
By Danielle Sinay
19 Memorial Day Beauty Sales To Shop In 2022
By Audrey Noble
Get Even More From Bustle — Sign Up For The Newsletter