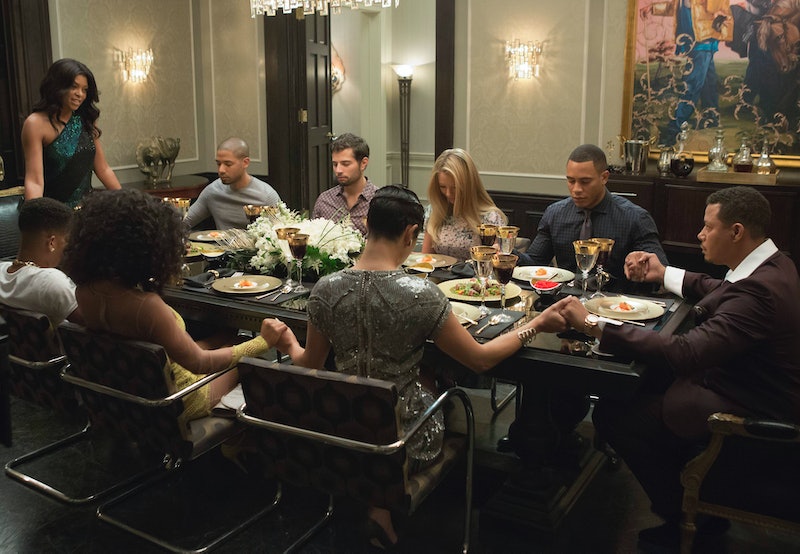 It's been nearly a decade since Hustle & Flow was released, and a lot has changed in both Hollywood and television. But people still know a good thing when they see one, and pairing Terrence Howard and Taraji P. Henson in a project together was, and remains, a very good thing. Empire feels like Hustle & Flow 's sequel, a look at what could have happened to the film's characters 10 years down the line. All the elements that made the movie special — the epic music, the realistic depictions of characters trying to put their crimes behind them, Howard and Henson's fraught relationship — are the same reasons I'm already addicted to Empire after just one episode. And lucky for us, this sequel will last a whole lot longer than 90 minutes.

If you haven't seen Hustle & Flow, please go watch it. Yes, right now. Beyond this point are a whole bunch of spoilers, and I don't want to ruin this great film for you. Ok, you're back? Good. As you now know, of course, Hustle & Flow starred Terrence Howard as Djay, a Memphis pimp/aspiring rapper, and Henson as Shug, a pregnant sex worker who worked for him. Though the roles aren't identical to Lucius and Cookie, the similarities between the two projects are undeniable.

What else makes Empire feel like Hustle & Flow: Part 2?

It's hard to feel anything but loathing for a pimp or other abuser, but, like Empire, Hustle & Flow's characters aren't so neatly divided into good and evil. By the end of the film, when Djay and Shug finally realize their love for each other (just as Djay is carted off to jail for murder), you can't help but root for their relationship. It's the same for the flashbacks to Cookie and Lucius' early years, before she was arrested. Empire could easily be a look at what happens to that type of relationship when serious obstacles, like a 17-year jail stint, come between two people.

The actors also seem to feel that their new characters are in some way related to their past work. Henson told the Associated Press, "We’re friends. We’ve known each other, so it really works for Cookie and Lucious. When they came to me with the project, I said it has to be Terrence. When I cracked open the script, I saw no one but Terrence."

Most of Hustle & Flow's plot revolves around Djay trying to make a single that will turn his life around. He finds it with "Hard Out Here for a Pimp," which was written by real-life Memphis rap group Three 6 Mafia, who won an Oscar for Best Original Song for their work. Though Djay is serving time when "Hard Out Here for a Pimp" is released, he finds out that the song is indeed a hit.

That first single could have been the start of Lucius' career. Shug helped Djay promote his album, the same way Cookie managed Lucius. And like Hustle & Flow, Empire also features original music by a real life hip hop star: Timbaland.

The biggest twist in Empire's pilot came when Lucius killed his childhood friend Bunkie without a second thought. Bunkie threatened Lucius with his knowledge of the murders the Empire CEO had committed, saying, "You can fool this country you legit, but I know you ain't nothing but a punk ass gangster." You know who else fits that description? Djay, of course. When Bunkie refers to Lucius' past, it sounds an awful lot like he's referring to his character in Hustle & Flow.

Of course, Lucius and Djay or Shug and Cookie aren't really the same people. But there's not denying that the 2005 film shares an ethos with the 2015 TV show. The best part: we'll be able to watch this "sequel" for seasons to come.

Did you miss any of Empire Season 1's action? Watch Bustle's drunk recap here before the Season 2 premiere:

More like this
Gabourey Sidibe Wore A Traditional West African Wedding Dress On The Cover Of Brides
By Dominique Norman
What’s New On Netflix: A Victoria Justice Rom-Com & The Return Of David Letterman
By Arya Roshanian
'Doctor Who’s New Star Is Already Huge On TikTok
By Maxine Harrison
How Ncuti Gatwa's 'Doctor Who' Casting Impacts His 'Sex Education' Future
By Nola Ojomu
Get Even More From Bustle — Sign Up For The Newsletter