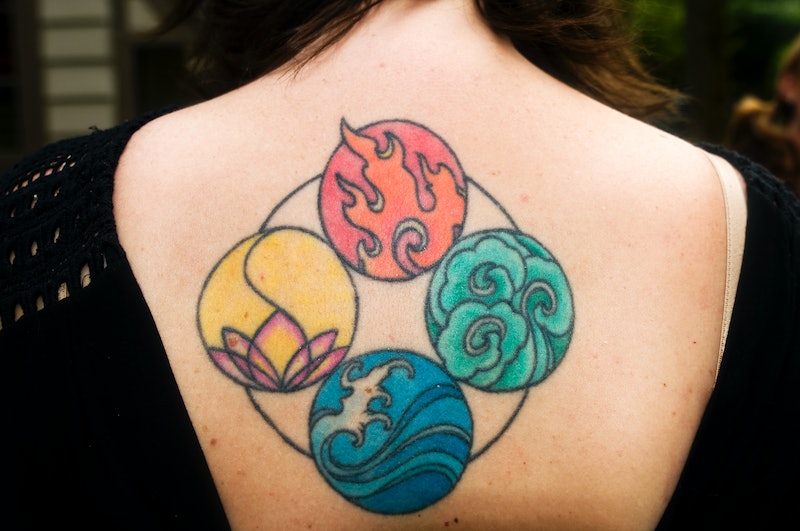 Last fall, a dear friend of mine approached me to ask for an unusual favor. “I’m looking to get a new tattoo,” she said, “and I want you to design it.” I was both flattered and confused. You see, I’m not a professional artist, and not even an amateur one — at best, I’m a doodler, and I’m pretty sure that all of my art skills stopped developing in the fifth grade. But since I love my friend, and I thought it would be a fun doodle, I said, “Sure.”

“I want to put these coordinates somewhere on my ribcage,” she explained, “but I don’t know how I want to present them.” I liked the idea of a tree — the coordinates chart important places in her life, and putting them at the bottom of a trunk seemed like marking the soil where she had formed her own roots. So I drew the design in a notebook, and made the tree a little swirly and doodle-y, because that’s how I doodle. Two weeks later, she inked that doodle onto her body. Forever.

Don’t get me wrong, I’m overjoyed to have been a part of creating an indelible skin fixture on such a beloved friend. I’d brand all of my friends that way if I could. But I guess I didn’t understand the permanence of my actions, the fact that this image would follow my friend to the grave. Or maybe it was that I couldn’t quite relate to the impulse to put anything on my body forever. Especially anything I personally had drawn with my mitten hands.

The tattoo that's now there forever.

I’ve thought on and off about getting a tattoo. I like to get wacky haircuts for fun and wear crazy leggings, so I’m all about expressing my true nature with my outward appearance. I’ve even painted a shitty mural on the walls of my bedroom, so why not do so on my skin suit? Still, would a tattoo I got at 23 stand the test of time, always reflecting my style and personal philosophy?

Maybe if I got a heart, because love is forever, or a shoe, because I’ll always wear shoes (then again, I do go barefoot sometimes)? Maybe I'd get reminders tattooed on myself, Memento style? “Wear deodorant” on my wrist, since I so often forget that, or “Go to the gym” on my stomach, just to really reinforce a point. Would I get it somewhere secret, in the fear that no respectable business would hire a tattooed woman? From my experience in the work force, I think my B.A. in English poses more impediments than a tattoo. Clearly, I'm still confused.

I decided to find out why people I knew got the tattoos that they have. I interviewed my roommates and friends, as well as a Brooklyn tattoo artist. Here are five tattoos they suggested I get, and the stories behind them.

Tip #1: Get something meaningless, because we’re going to die anyways.

One friend got his tattoo on a complete whim, when he stopped into a tattoo parlor and asked for a simple rectangle on his forearm. The tattoo was purely aesthetic, he claimed, devoid of symbolism. “It’s an empty box,” he said, “meaningless.” (I didn’t try to convince him that, in that case, the rectangle did in fact symbolize meaninglessness.) He claimed it was the impermanence of the act which made it less of a big deal — we are all going to die, our tattoos to rot as the rest of our flesh, so why not?

My roommate Carli has four tattoos: three on her arm that I knew about, and one on her butt cheek that was a surprise. One on her arm is this small doe.

“I grew up on Middleton Gulch — it’s a dirt road that goes down into the mountains and then goes back up again. We had bears in our backyard growing up, and deer everywhere. One time I was driving home and I saw a deer in the road. It was snowing and I stopped my car — and 18 of them walked across the street, I counted them. I thought, ‘This is amazing.’"

Tip #3: Get a Strawberry Ass Tat, just for the hell of it.

Of course, I had to ask about Carli’s Ass Tat.

“I got it with this dude I used to work with. We were drunk and having a summer fling, and we went because it was Friday the 13th. It wasn’t like I was into strawberries when I was little, it wasn’t a sentimental thing. I could’ve gotten it anywhere, but I was like, the ass — ass tattoos are hilarious. No one’s going to see it, and one day it’s going to be this wrinkly old saggy strawberry. But it was $13. It’s memorable, too. Strawberry Shortcake.”

Tip #4: Get something that maps the passage of time.

The friend I drew the tattoo for talked about her tattoos as evolving along with her: from a heart on her ankle, a "love thyself" reminder after an emotional year; a symbol from an a cappella group (a cappella dies hard); waves and a Unitarian blessing; and finally, the tree. "They’re all just a record of who I was in the time that I got it," she told me, "even if I wouldn’t get that same tattoo today.”

Tip #5: Get a skull on your shoulder, just to be one of the cool kids.

Lastly, I spoke with Gene Coffey, a tattoo artist at Brooklyn’s Tattoo Culture. Gene is a painter-turned-tattooist who’s been tattooing for over eight years, and his expertise lies in making watercolor tattoos (he’ll paint a watercolor, then copy it onto your body with the precision of a photograph). Talking to Gene and looking through his beautiful portfolio made me want a tattoo the most.

“The first tattoo I got was this little skull-and-cross-bone thing that I drew myself, I went to just some random shop. I always knew I wanted a tattoo, but I never had the money to get them when I was younger. One of my friends was just covered in tattoos at the time, and I thought, I want to be cool and have something that I drew on me," Gene said. “Whether somebody wants to admit that or not, on some level, everybody when they get their first tattoo feels really f*cking cool. Half-jokingly I say it’s more non-conformist to not get a tattoo, but it’s sort of becoming that way."

All things considered, I still don’t know whether I would get a tattoo — the questions of "what, where, and why?" still plague me. But I still can’t shake the idea of wanting one someday — and this, I realize, is because I want to be one of the cool kids. Maybe it's an underlying wish from high school, to shake off those memories of marching in band with a xylophone strapped to my pelvis, and of the time my mom announced at a dinner with family friends, "All of Jane's high school boyfriends were gay."

Of course, I also want very badly to piss off my mom. If I got a tattoo, she’d say something like, “But on your wedding day, when you’re wearing a beautiful white dress, that’s on your back?” And I’d be all, “Who said anything about getting married? Marriage is for dweebs single forever no grandchildren for you!” Then I’d move to Berlin and only call once a week. That would really piss her off.

We'll just have to wait and see what I decide, won't we.

More like this
The Case For Using Your Fanciest Beauty Products Every Single Day
By Carolyn Steber
Wavy Hair Girlies Rejoice, Rhyme & Reason’s Wave Revival Regime Is Here
By Darshita Goyal
6 Asian Beauty Rituals That Will Soothe Your Skin, Scalp & Mind
By Jennifer Li
Marianna Hewitt’s Advice For Building A Personal Brand
By Taylor Jean Stephan
Get Even More From Bustle — Sign Up For The Newsletter
From hair trends to relationship advice, our daily newsletter has everything you need to sound like a person who’s on TikTok, even if you aren’t.