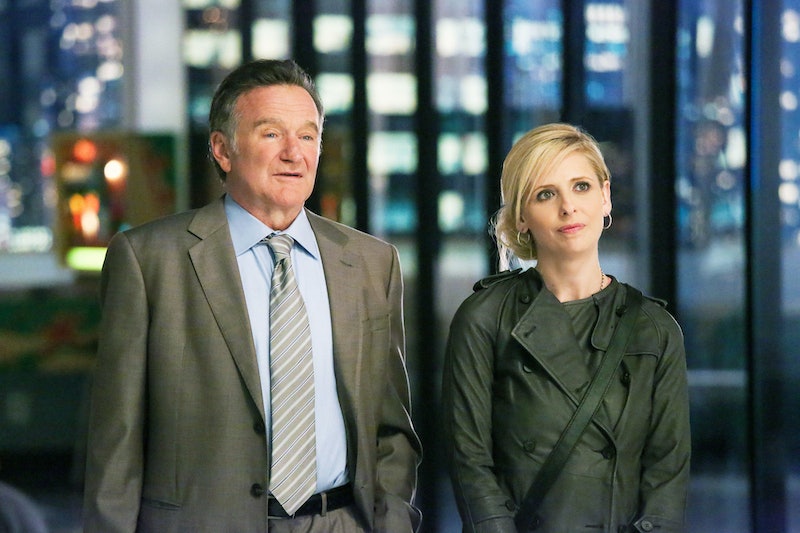 Robin Williams made his triumphant return to television Thursday on CBS's new comedy series, The Crazy Ones, which costars Sarah Michelle Gellar (yay, Buffy!) and a remarkably funny ensemble cast. For all of us Mad Men junkies, the mysterious Bob Benson, played by James Polk, stretches his comedy muscles alongside Williams' Simon Roberts as his sidekick, Zach Cropper. Also for us Mad Men junkies, The Crazy Ones takes the ad agency setting to a universe in which Robin Williams is almost as funny as Pete Campbell falling down the stairs last season.

The season premiere opened with Gellar, who plays Williams' daughter Sydney Roberts, attempting to direct children in a cookie commercial alongside her colleague Andrew (Hamish Linklater). She's hyper-neurotic, which became funny when Williams showed up in the episode playing with a gigantic Rock 'Em Sock 'Em robot instead of being in a major meeting. (Does this seem a little Roger Sterling-ish to you?) They have exceptional father-daughter chemistry, which was pleasantly surprising. Obviously Williams' Simon Roberts is a twice-divorced veteran of rehab to make his backstory moderately interesting, as if he even needs it, because he's being played by Robin Williams.

In a very Mad Men-esque moment, Roberts and Roberts is on the verge of being fired by McDonald's, the company that makes up 60 percent of their revenue (what?), and Simon pulls a Don Draper-tried and true move of pitching nostalgia. He pulls up the company's first commercial, conducts a singalong with the help of Zach, and ends up saving the company from the chopping block. Simon definitely watches Mad Men, just saying. He then promises to book a major singing talent to cover the "You Deserve A Break" song from the original commercial by the following day.

Enter KELLY CLARKSON. Who knew Kelly Clarkson did comedy, besides the ultimate joke of all time that was From Justin To Kelly (which I watch every time it's on even though I know it's bad, damn you American Idol)? She plays herself, obviously, and after singing a hilariously sexy song about meat because she's trying to "sexify" her image, throws a diva moment that ends up culminating in Gellar's Sydney standing on a booth singing "You Deserve A Break" at the top of her lungs. Clarkson then agrees to sing and the episode ends happily ever after, with Sydney saying that she might just be as crazy as her dad. Aw.

On the whole, the episode was on the short side. Why so many damn commercials, CBS? There's something here, if given enough time. We all already know the comic genius that is Williams (Hello, Mrs. Doubtfire and Flubber) but there wasn't enough time in the episode to establish just how funny he and Gellar could be together. Plus, the ensemble cast (which also features Amanda Setton, aka Penelope from Gossip Girl!) have serious potential. It also seems worthy of mention that Williams has a track record of being GREAT at playing dads, so I have faith in him. Let's hope CBS continues to pull it together come episode two.

Also, now we know where the title comes from: The Apple commercial from 1997, narrated by the late, great Steve Jobs.

More like this
The Bling Ring's Alexis Neiers Has Come A Long Way Since Her 'Pretty Wild' Days
By Sophie McEvoy and Arya Roshanian
What’s New On Netflix: Meet 'The Real Bling Ring'
By Arya Roshanian
Jinkx Monsoon Is About To Get Real Sketchy
By Sam Ramsden
Kenan Thompson Pointed Out A Super True Detail About 'Friends' In His Emmys Monologue
By Grace Wehniainen
Get Even More From Bustle — Sign Up For The Newsletter