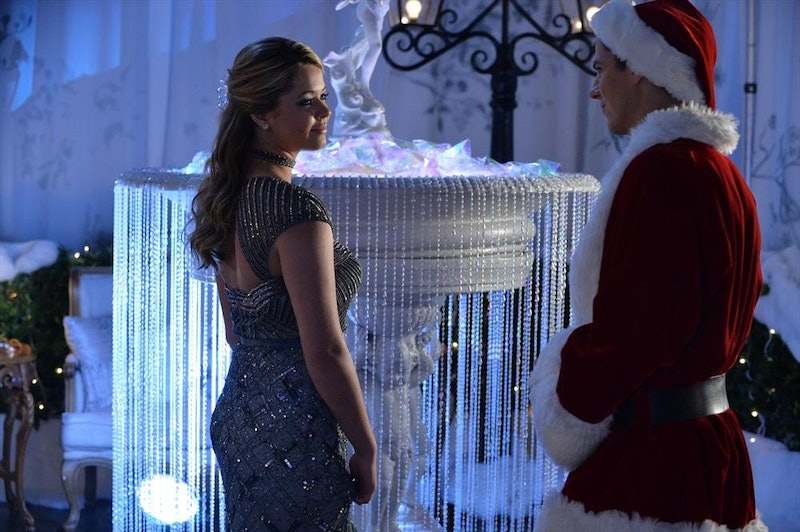 I can't say I'm ever sad to see a detective leave Rosewood — considering their track records with my favorite characters on PLL. But, this time, I'm forced to wonder exactly what side this detective is on. On Tuesday night's Pretty Little Liars , Hanna went looking for Detective Holbrook at the trailer park he's supposed to be visiting. Because, surprise, following the reveal during PLL 's holiday special that Holbrook and Ali are working together, he went on "personal leave" from the Rosewood P.D. to tend to his sick father. At least, that's what the Rosewood P.D. thinks.

Needless to say, Hanna's visit to the Holbrook family trailer didn't go well and prompted me to wonder — for possibly the thousandth time — why no one locks their car doors on PLL when they get out. Like, wouldn't that be a good idea when you're going traipsing around a creepy trailer park? No? OK, Hanna. But anyway, Hanna learned that Holbrook hasn't been at the trailer park for weeks AND, unsurprisingly, Holbrook's ailing father mistook her for Alison. (WHEN IS EVERYONE GOING TO STOP DOING THAT?) Papa Holbrook asked Hanna whether or not she was out on bail — first of all, HOW DID HE KNOW THAT and second, clearly Holbrook and Ali had a relationship beyond what PLL let on.

So, where exactly is Holbrook? Well, I've got a couple of ideas that run hand-in-hand with the bloody knife found in Mona's backyard.

When someone goes missing on PLL, they're probably dead. And it's entirely possible that that knife that Toby found during the police search of Mona's yard wasn't the weapon that killed Mona, but rather, the weapon that killed Holbrook. I mean, his father hasn't seen him for weeks and "A" is apparently still on the loose. If Ali confided any fear in Holbrook and he was getting close to figuring out who was terrorizing her, it's possible that he's also six-feet-under somewhere.

Theory #2: Holbrook is Helping Ali Get Out of Prison

Alright, people, bear with me here — that bloody knife didn't appear by accident and the only people who would know that the police were conducting another search of Mona's yard would be, you guessed it, the police. Just like Spencer, Toby, and Caleb guessed, it's possible that Holbrook planted the knife to frame one of them, or someone else entirely, for Mona's death so Ali could be released from prison. The timing is too right and, with Holbrook "away," it'd be easy for him to do Ali's bidding.

More like this
6 Mind-Blowing Fan Theories About How Stranger Things Will End
By Kadin Burnett
Why Sadie Sink Is Hopeful Max Will Return In Stranger Things Season 5
By Brad Witter
What Working At Marvel Is Really Like, According To A 'Ms. Marvel' Co-Creator
By Gretchen Smail
'Stranger Things' Star David Harbour Has This Actor In Mind For A Hopper Spinoff
By Alyssa Lapid
Get Even More From Bustle — Sign Up For The Newsletter