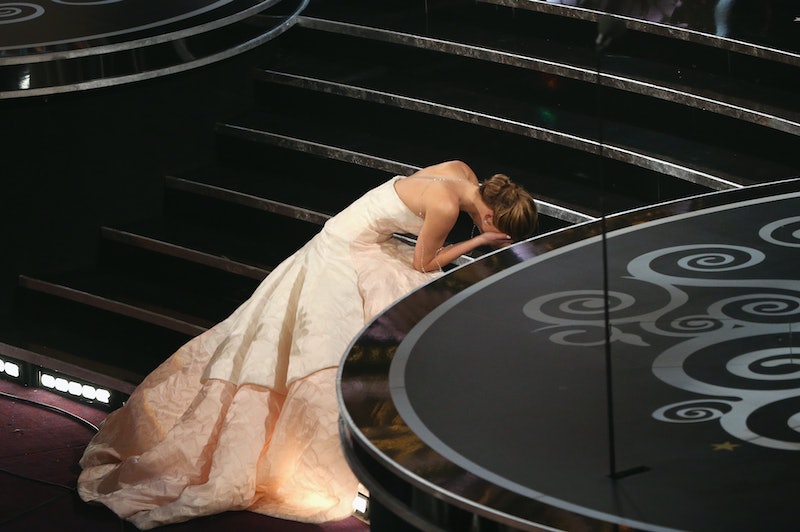 Now that award season is officially upon us, my Sundays for the next few months are basically accounted for. There are few things better than watching people in ridiculously expensive gowns take on the red carpet while you get to be comfy on the couch with your sweatpants and wine. And although the 2015 Golden Globes are behind us, along with Tina Fey and Amy Poehler's fabulous hosting days, there is still plenty to look forward to. Exhibit A: The Oscars. Nominations finally come out on Thursday, and the show is just barely more than a month away on February 22. There's one problem, though — I have kind of a love/hate relationship with the Oscars.

Don't get me wrong: There is no award show more prestigious or more glamorous. A competitor simply doesn't exist. But with prestige and glamour comes a terrible downside: The Oscars are incredibly boring. Not the whole show, mind you. Just, you know, everything after the past hour, except for the very end when Best Picture is announced — and the sound of Meryl Streep crying jolts you awake from your nap and you're like, "Oh, crap, what happened?!" The reasons to love and hate the Oscars are in equal measure, honestly.

Don't believe me? I'll prove it.

Reasons to Love the Oscars

1. The Stakes Are Higher

This isn't like winning an MTV Movie Award, guys. The Oscars actually count. This means reactions from winners and losers are going to mean more. And is there anything better than watching someone become totally astonished that they're being recognized for their talent? I love a good unexpected crier.

2. The Fashion Is Amazing

Which means the red carpet is the best to watch, too.

3. Legitimately Everyone Important in Hollywood Is There

You can't skip the Oscars if you have an invitation. You just can't. Which means we get to see all our favorite celebrities in one place, even the ones who look down their noses at award shows like the VMAs. Not even Michelle Obama can resist getting involved.

4. There Are No Terrible Music Performances

Basically, none of the riff raff. You will not find Miley Cyrus grinding on anyone at the Oscars. And while generally I'm entertained by shock value performances, the Oscars are a welcome respite.

The best host of all time is hosting the Oscars this year, and it's going to be amazing. Who doesn't want to watch Neil Patrick Harris do just about anything? Bonus points if he brings those adorable kids of his.

6. The In Memoriam Montage

It's incredibly sad to be reminded of the celebrities who have died in the past year, but it's also a really good excuse to have a good cry if you need one without looking stupid.

It's not that I love that the poor guy never wins the Oscar he clearly desperately wants. It's just a running joke that I look forward to every year. Need a hug, Leo?

9. We're Probably Going to See a Lot of Jennifer Aniston

Because Cake is clearly going to be nominated for everything.

10. Acceptance Speech GIFs After the Show

I love a good influx of brand new GIFs.

Because they get so exhausting. It's so nice to know what to expect, and to not stress out that your fave celeb is going to say or do something completely stupid that makes it really difficult to keep liking them. The Oscars are classy.

But Then, There Are the Reasons to Loathe the Oscars

Scandals are fun! They're exciting! They give us something to tweet about!

They just are. There's no way around it. Especially when the Academy president starts talking. Snoozefest.

3. There Are a Lot of Strangers

Okay, not strangers, but industry people who I don't recognize.

4. There Are a Lot of Movies That the Average Person Has Never Heard Of

How am I supposed to care what wins if I have never heard of the winning movie?

Unless, of course, they're from a Disney movie, in which case bring it on.

6. There Are Way Less Insulting Jokes

What's the point of an award show if not watching people offend and then be offended?

7. The Categories Are So Lame

What do you mean nobody's nominated for Best Kiss?

8. And the Winners Are Super Predictable

The only other award show that is guilty of this is the Emmys, and only because they just keep giving awards to Modern Family. Ugh.

9. And Did I Mention How Boring the Oscars Are?

10. There Is No Alcohol Allowed

Seriously. This could be a contributing factor to why the Oscars are so boring.

Like, sometimes four hours long. And that's just excessive. It's a Sunday night! I have things to do! Mostly sleep. I have sleep to do.