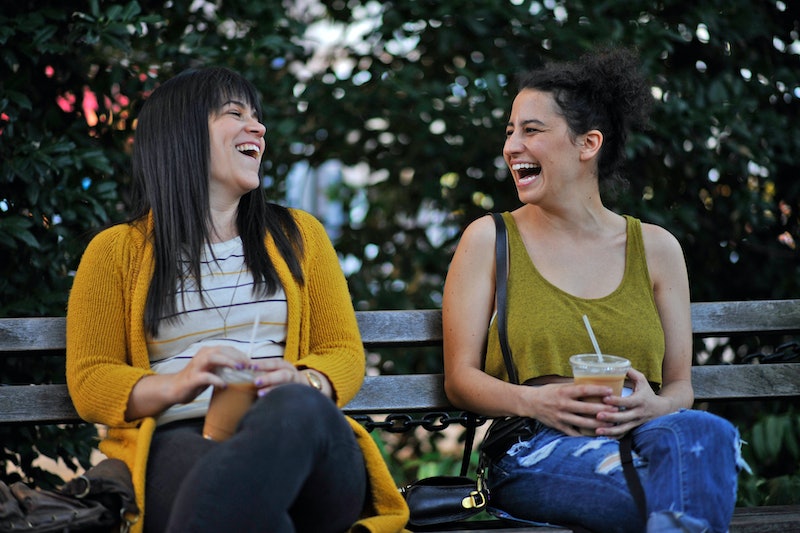 I have always preferred smoking weed over drinking alcohol. I even started smoking weed before I started drinking, the summer before I went away for college. Marijuana has simply always agreed with my body, my mind, and my personality better than alcohol. Is that weird?

Some people seem to think so. Maybe it's because I'm from the Bay Area, but when I moved to New York, I was shocked by just how entrenched the drinking culture is. People don't just tend to have a glass of wine here — they often drink to the point of getting drunk. Or sick. Or blacked out.

Hey, no (major) judgement: I enjoy getting drunk myself, every now and again. Like, maybe, once a month? Once every other month? But it just doesn't do my body well, and as someone who works full time, I just don't feel like wasting my weekends feeling hungover. If I want to feel a buzz when I go out (or stay in), I just get high. It's easy, cheap, and in my humble opinion, way more interesting and fun.

I'm sure all my fellow female fans of green know what I'm talking about. But the rest of you might still need some convincing. So without further ado, here are 19 reasons why I have always — and will always — prefer marijuana to booze.

1. I Have Never Thrown Up From Smoking Too Much Weed

Case and point: After I drank three glasses of wine last weekend and promptly threw up my expensive dinner, I marveled at just how long it had been since I'd last thrown up. And you know why? Because I barely ever drink that much anymore.

2. ... Or Gotten A Bad Night's Sleep From Smoking Too Much Weed

When I drink, on the other hand, I almost always get a shitty night's sleep. When I smoke weed, I sleep like a baked baby.

3. ... Or Slept With The Wrong Person For Smoking Too Much Weed

There's a reason why there's no expression like "weed goggles." If anything, marijuana makes me more attuned to what I actually feel and want, so I've found I'm less likely to make mistakes, romantic or otherwise.

4. I've Never Been Sexually Harassed At A Bar Because Someone Was Simply Stoned

I have, on the other hand, been groped, harassed, and generally yelled in the ear at by drunk guys.

5. Weed Is SO Much Easier On My Body

I seriously can't believe what drinking puts your body through. Hangovers aren't just annoying — they're your body going WTF, MAN, REALLY?! Weed, on the other hand, can often do a body good. Especially if you vaporize it, rather than smoking it.

According to High Times, (which, granted has a bong in this race), marijuana "has a long, long list of physician-approved medical uses and the list is growing. Other than red wine’s ability to lower blood pressure, alcohol does just about nothing positive for a person’s health."

Anecdotally, I find marijuana doesn't so much "cure" a headache or cramps for me as it does simply make me not care about said symptoms. Everyone's different though.

7. Weed Doesn't Weaken My Immune System The Way Drinking Does

If I ever come down with a cold, which I do more rarely than most people I know, it is usually either a) while I'm on my period or b) after an ill-advised night of drinking. Alcohol weakens your immune system to a degree weed simply doesn't.

Have you watched The Little Mermaid high? If not, I highly recommend it. Along with pretty much any movie besides Requiem For a Dream.

9. I Prefer The Types of Conversations I Have With My Friends When I'm High

Sure, drunk conversations can be great, but weed is simply the more philosophical, introspective substance. I love the conversations, realizations, and peeing-in-your pants laughter bud brings on with my friends.

Sure, people laugh when they're drunk. But weed definitely takes the cake on this one. Everyone knows that.

11. I Am Rarely Motivated To Do Yoga, Write, or Clean My Closet When Drunk

Some people are productive while they're drunk, and lazy when they're stoned. For me though, I'm way more likely to clean, stretch, draw, write poetry, or otherwise be creative and productive when I'm high. Not sure why, but I love it.

12. Being Drunk Rarely Brings On As Many Useful Epiphanies

Like I said, it's a philosophical drug. If I let myself just sit and think while high, I can get in touch with some thoughts and feelings I didn't even know I was having. It can be an extremely useful way of emotionally processing things that are happening in my life, only from a different angle.

On the other hand, if I sit alone while drunk, I either get mopey, drunk text, or fall asleep.

13. It Leaves More Room For Snacks

Beer is great and all, but it's filling. Weed doesn't have any calories, which leaves more room for CAKE. Priorities, people.

I might get a dry mouth, but I won't be slowly losing all my electrolytes.

Some people claim they get a weed hangover; feeling a little groggy the day after, or a little down. That doesn't tend to happen to me, though if it does at all, it is definitely nothing like a hangover from drinking. There's no headache, puking, achy feelings, or anything like that. Maybe I'm still a bit munchy or mellow, but that's it.

16. Getting High And Going Out Is Much, Much Cheaper

I save SO much money. I smoke about once a week. To sustain that habit, I buy an 1/8 of weed for $50 bucks, mayyyybe every five to six months. It's really, really cheap compared to buying drinks, which I almost never buy— or want.

17. I Don't Have To Pee All The Time From Getting High

Also nice when you're at a crowded bar.

18. If I Bring a One-Hitter With Me, I Make Even More Friends

Suddenly, I'm that cool, interesting girl, and everyone wants to talk to me. (Or a hit.)

19. Weed Makes Me More In Touch With How I'm Feeling — Not Less

Alcohol is a substance that's popular because it makes you forget about your insecurities, and taken to extremes, who you are. I believe weed tends to scare people because it often has the opposite effect. When I'm feeling awkward while socially stoned, I like to walk towards that feeling, not away from it. Being present with whatever it is I'm feeling, without getting paranoid about it, is like getting one step closer to being totally at ease with myself.

Because I don't want to forget my insecurities: I want to face them, and laugh.