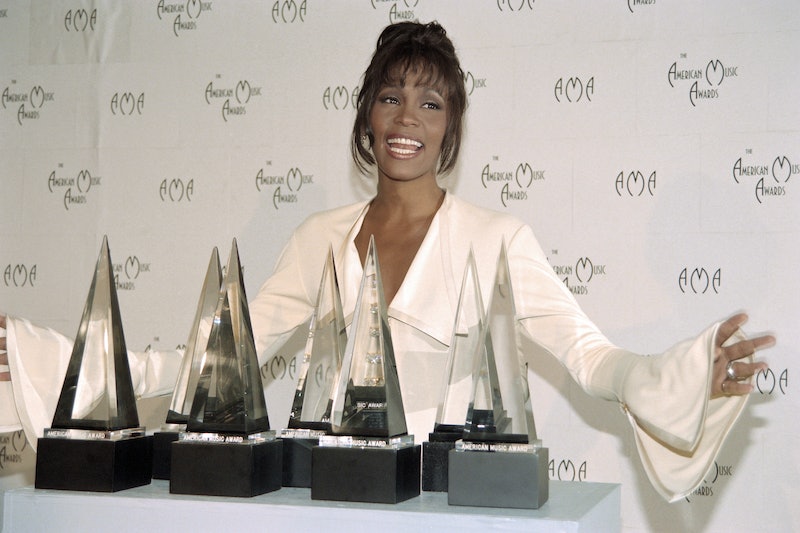 The premiere of the latest Lifetime biopic is finally here, with Whitney premiering on Saturday night at 8 p.m. It isn't out of place to wonder how the film will represent the low points in Whitney Houston's life, with drug abuse, her relationship with Bobby Brown, etc., but another question is how they will represent the high points in her life. Whitney Houston is one of the most awarded musical artists to ever exist, and if the film pays homage to her rise to fame, it will most certainly pay homage to the many, many awards Houston won in her lifetime.

Honestly, "many awards" is an understatement for the number of total awards Houston won before her death in 2012. Combining all of her awards won, this number includes honors like the NAACP Image awards, Emmy awards, Grammy awards, and then much smaller awards, Houston won over 600 awards. 600 AWARDS! How is that number even attainable? The same way the notes in "I Will Always Love You," are attainable... Only possible to attain by Whitney Houston. So what is the breakdown of Houston's awards? I won't go through all 600+ of them, because that would take forever, but here are the numbers of Houston's most recognizable awards given to her.

Overall, Houston won 22 American Music awards, although she was nominated for 38. You might be asking how that number is possible in her lifetime, but Houston is one artist who was nominated in many categories each year (for example, Soul/R&B and Pop/Rock at one award show). Her first nomination was in 1986, but her most successful year was in 1994, if you can guess what song came out around then (Answer: "I Will Always Love You" in late 1992). In 1994, Houston was nominated for nine awards, and won eight of them.

Houston was nominated for 66 (!!!) Billboard Music Awards, but only walked away with 31 of them (only 31). She won many Billboard Awards for the soundtrack for The Bodyguard, the film she starred in with Kevin Costner in 1992 that featured "I Will Always Love You."

Houston won seven Grammy awards in her life, and was nominated for 26. Her first Grammy nomination (and win) was in 1986 for Best Pop Vocal Performance, Female. Houston was inducted into the Grammy Hall of Fame in 2013, the year following her death.

Obviously those are only a fraction of Houston's awards. She has also won awards at the Soul Train Awards, the World Music Awards, People's Choice Awards, and she's even won Guinness World Records. Hopefully, Lifetime's biopic will focus on all of these achievements, rather than just the drama found in Houston's personal life.

More like this
The Trailer For The Whitney Houston Biopic Has Twitter Feeling Heated
By Radhika Menon
Rita Ora Celebrates Finding Her "Fairytale" Ending With Taika Waititi
By Sophie McEvoy and Catharina Cheung
Everything To Know About Taylor Swift’s 10th Studio Album, 'Midnights'
By Grace Wehniainen and Jake Viswanath
Looks Like She Made It
By Lindsay Zoladz, Beau Grealy and Tiffany Reid
Get Even More From Bustle — Sign Up For The Newsletter