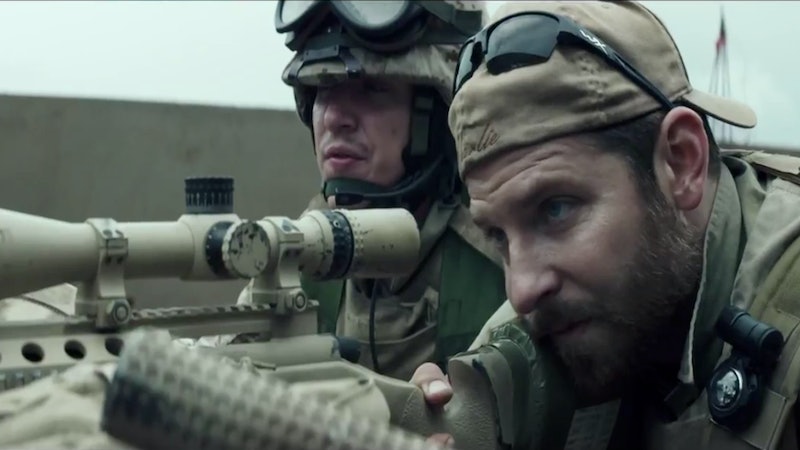 When the Oscar nominations were announced Thursday morning, many were surprised when unexpected contenders like Laura Dern and American Sniper made their way onto the list. Yet the biggest shock of all was who wasn't in the competition: women. I don't just mean the lack of female representation in the Director and Screenplay categories, although that's certainly disturbing — I'm talking about Best Picture, the most important category of all, and a race in which every single one of the eight movies nominated is about men.

Seems unbelievable? Just look at the list. There's American Sniper, about a NAVY Seal. The Imitation Game follows the life of Alan Turning. Birdman keeps all its women to supporting parts. The Theory of Everything has Felicity Jones, sure, but is truly the story of Eddie Redmayne's Stephen Hawking. Whiplash is about a male drummer and his male instructor. The Grand Budapest Hotel has, like, two women in its entire, massive cast. Selma is a biopic of Martin Luther King, Jr. And Boyhood, well, just look at its name; a great part for Patricia Arquette can't take away the fact that the movie's focus is on its male lead character.

Independently, this isn't all bad; few can argue that Boyhood or Birdman aren't great stories that deserve to be honored. As a whole, however, having a Best Picture race entirely about men is a major disappointment, especially considering the abundance of high-quality female-oriented work that was released in 2014. Was American Sniper truly deserving of a nod over Gone Girl? Was there really no room for Wild to sneak its way into the race? Couldn't Ida, a Foreign Language contender about a nun that's also one of the best-reviewed movies of the year, have managed to score a nomination in this category, too?

Yet for reasons known (the Academy is largely male) and unknown (seriously, American Sniper over all of them?!), no female-centric movies scored a nomination for this year's Best Picture. Of the eight films nominated, only two (Boyhood and Selma) even manage to pass the Bechdel test — three, if you count Birdman's 30-second scene consisting of two women talking about Broadway, before immediately changing the topic to men and kissing for no reason at all. In terms of gender equality, 2015 is the most disappointing Best Picture race in years.

It's not all doom and gloom, however; some of the nominees in other categories represent films and stories primarily about women, from Julianne Moore in Still Alice to Laura Dern in Wild. Still, compared to recent competitions in which female-oriented films like Gravity, Dallas Buyers Club, and Beasts of the Southern Wild took center stage, 2015 is, by far, the darkest year yet for women at the Oscars.

More like this
Here’s Everything Coming To & Leaving Netflix In December
By Jake Viswanath
The 'Love, Lizzo' Harry Styles Scene Is Just 1 Moment That Made Fans Feel Seen
By Brad Witter
Letitia Wright's Aisha Encourages A Vital Conversation Around Immigration
By Maxine Harrison
The 2023 Grammy Nominations List Is Full Of Surprises
By Jake Viswanath
Get Even More From Bustle — Sign Up For The Newsletter