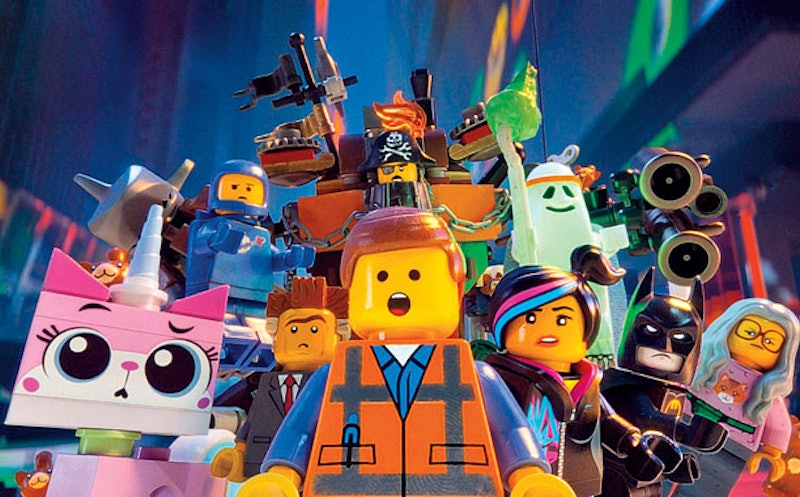 I don't know about you, but my Thursday got off to a decidedly horrible start. The 2015 Oscar nominations were announced early on Jan. 15, and the list is missing a ton of key films, actors, and directors. It may not be the most serious or upsetting omission, but that doesn't change the fact that The Lego Movie was snubbed by the Academy Awards, and its many grown-up fans are pissed. Why wouldn't we be? The Best Animated Feature category contains The Boxtrolls, but not The Lego Movie. If you enjoy animated movies at all, you should know that this is outrageous!

Will Arnett as Batman

I've said it before and I'll say it again: Will Arnett is the best Batman in movie history. Sorry, Christian Bale, but besides the fact that Arnett's voice was made to play Batman in an animated movie, every line he utters with it is nothing short of side-achingly hilarious. Maybe the Lego Batman spinoff movie will get some more recognition.

The Lego Movie had a huge cast of all stars, who each managed to make their characters memorable — an impressive feat when you remember just how many Lego people were introduced in the film's 100 minutes. Neeson played a police officer grappling with the conflict between the benevolent, understanding version of himself and the harsh, by-the-letter-of-the-law version. It's a theme we've seen in countless movies before, which The Lego Movie made unique by making those Good Cop/Bad Cop sides two actually different people. His Lego head would spin around, alternating between those instincts, and it was as funny as it was morally effective.

Elizabeth Banks' Lucy, aka Wyldstyle, was the real hero, and The Lego Movie made that clear. Sure, Emmet was "the Special," but like the Hermione to his Harry Potter, none of his accomplishments would have been possible without her, and he valued her skills. Lucy also makes a statment about how often female love interests can be idealized in movies. Emmet sees her as completely perfect — he can barely get a word out when they first meet. But the audience sees that Lucy is a normal, flawed person. We see her overcome her insecurities to accept her self for who she is, Lucy, not Wyldstyle, and in the process realize her own value. Once that happens, she becomes a true badass, ditching her jerk of a boyfriend (that'd be Batman, by the way) and playing a key role in the movie's conclusion, aka saving the damn (Lego) world.

Alison Brie's Princess Unikitty deserves special mention as well, as a female character written to be just as multi-faceted as the men around her. Like Good Cop/Bad Cop, Princess UniKitty has two very different sides to her, they just happen to be contained to one face/personality. Sure, she's sweet, loves rainbows, wants to everyone to get along, and avoids becoming directly involved in any negativity — until you mess with her. Then she will go full-on nuclear, knocking down anyone who stands in her way and sticking up for those she cares about.

In just 100 minutes, The Lego Movie introduces you to not just the general Lego world, but smaller pockets within it. Emmet's home, Bricksburg, is a bustling city living under the watchful eye of President Business, plied into compliancy by media and big business. We quickly see what it's like to live there, and understand both why so many citizens are so easily indoctrinated and why the spell must be broken. The other worlds, which include Middle Zealand, Cloud Cuckoo Land, and The Old West, are also fully fleshed in a matter of minutes — astonishing for a movie that also contains a ton of plot.

I can guarantee that you will laugh your ass off while watching The Lego Movie, no matter how old you are. There are some jokes clearly meant for adults that always hit the mark, and the jokes that make the kids in the audience laugh never feel pandering. All of the humor is smart, which is a difficult task for an animated movie that has such a wide audience to appease.

The Lego Movie uses all of these elements to deliver messages that are crucial for kids to learn, and adults to be reminded of. One is that you don't need to be the subject of a prophecy or have some vital function to be special — just by being yourself, you're impacting others and making a difference, whether or not you even realize it. And another is that sometimes, you're not supposed to "follow the instructions," you have to try new things, make a mess, go against the grain, and stand up for your right to do that if its ever threatened. Both of these are simple, but that only makes them more applicable. I sincerely hope that the people who loved The Lego Movie, especially the younger viewers, took these themes to heart.

Though not entirely unexpected by the time it happens, The Lego Movie's big twist is emotionally affecting all the same. We see elements of real people throughout the movie. The big weapon, "The Kraggle," is revealed to actually be Krazy Glue, the Piece of Resistance is its cap, and "the big man upstairs" is a human hand. It's clear that at some point, the people playing with these Legos are going to be involved in the story, but that didn't stop me from crying when Will Ferrell's human character realized his son views him as a super villain for stifling his creativity and thorough imagination. When the two finally understand each other and play with the Legos together, it makes for one of the most satisfying conclusions I've ever seen on screen.

But yeah, the Academy is probably right. None of that is worthy of an award.