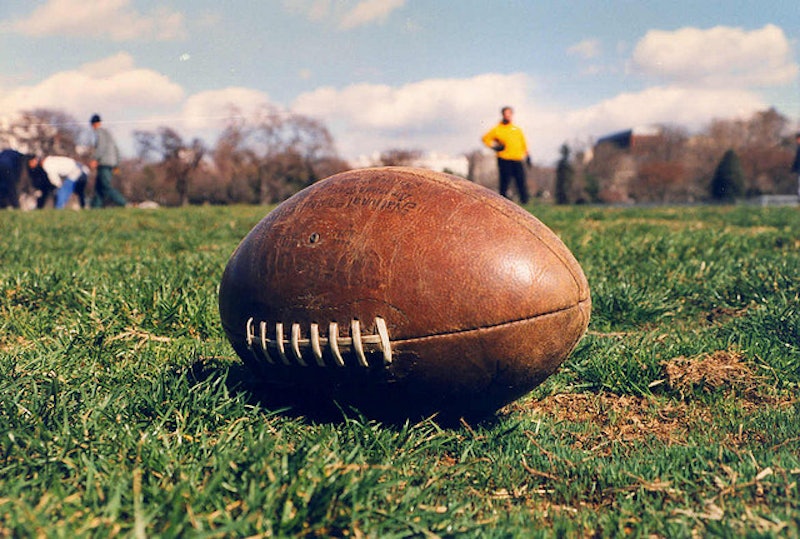 Over the years people have given all sorts of excuses for why girls shouldn't play sports with boys, but this might the biggest head scratcher so far. A Catholic diocese in southern Pennsylvania has decided girls can't play football with the boys because modesty. More specifically, because it could lead to "potentially immodest physical contact." Which is just bizarre. Have they not seen how much gear football players have?

This issue first arose in the diocese in 2013 when then-11-year-old Caroline Pla campaigned to be allowed to play on the local Catholic Youth Organization football team. The diocese eventually agreed to allow co-ed football in the program, and Pla, who had been playing co-ed football since joining a kindergarten flag football team, was allowed to continue with her team. And the whole matter seemed settled.

Unfortunately, the bishops' original decision to allow CYO football to be coed was "provisional," meaning it could be changed. And that's exactly what's happened. Though they have agreed to allow Pla, now 13, to be "grandfathered in" in order to finish her final season, after that CYO football in the diocese will once again go back to being "No Girls Allowed." And their reasons are just bizarre.

In a statement regarding their decision, the Pennsylvania Catholic Conference Education Department explained

Preparation for Christian adulthood likewise involves the development and encouragement of appropriate, dignified and respectful forms of contact between male and female students. The Diocese therefore believes that it is incompatible with its religious mission and with its effort to teach Gospel values to condone competitions between young men and women in sports that involve substantial and potentially immodest physical contact. Consequently, the Diocese has adopted this policy prohibiting co-ed participation in the following sports: wrestling, tackle football and tackle rugby.

Again, have you seen what people wear while playing football?

Now, I suppose we could give them the benefit of the doubt and say that they're worried about potential "immodest physical contact" off the field, except that the sports they've singled out as off-limits for co-ed are all contact sports. Things like soccer or tennis are not listed. Which leads me to believe they are in fact worried about "immodest physical contact" while the kids are playing the sport. Which just...what?

Even aside from the issue of padding, which does make this particularly ridiculous, the rationale here still simply does not track. If the forms of physical contact that are typical in football are "immodest" shouldn't they also be concerned about boys engaging in it, given the Church's continuing stance on homosexuality? Does it magically become immodest because a woman does it? And how would tackling someone on a football field be "immodest" anyway?

Maybe I'm reading too much into this, but I feel like this is related to our culture's prevailing notions about "purity" and dislike of ever really talking about sex honestly and directly. We've reached a point, it seems, where the very utilitarian action of tackling someone during a football game can be seen as sexual. Which is ridiculous. Men and women (as well as boys and girls) can have physical contact that is not sexual in nature. Contact is not sexual unless, well, it's sexual.

Is that really that hard to understand?

Hopefully, this wacky decision will once again be overturned, this time for good. Caroline Pla and her family are once again fighting to allow girls on the team, and have started a Change.org petition you can find here. With any luck they will once again prove to be victorious. Because perpetuating the ludicrous notion that men and women playing sports together is "immodest" does no good for anyone.