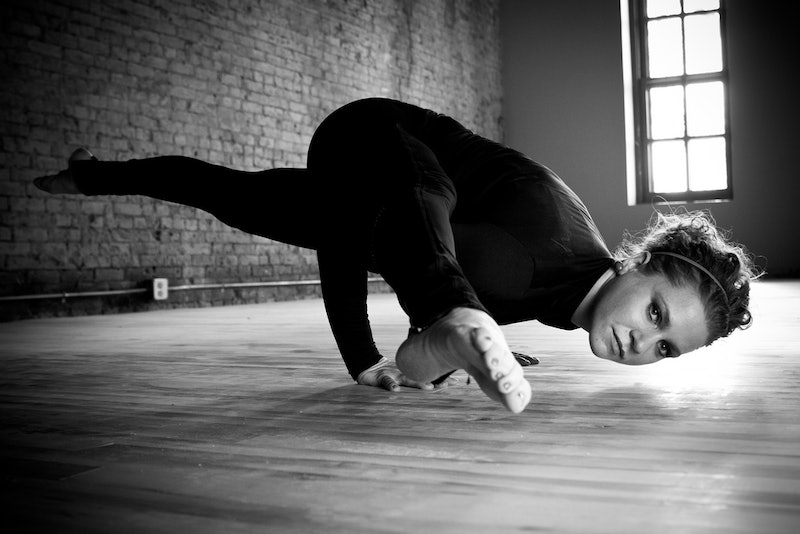 For a condition shared by 20-30 percent of all women, very few of us have any idea about the ways that a tilted (a.k.a. a tipped, retroverted, or retroflexed) uterus might actually effect our lives. And so, as a result, a lot of heresay and gossip (especially about fertility issues) takes the place of real facts — even in the lives of some women who have tilted uteruses themselves. A college acquaintance of mine used to brag that because of her tilted uterus, she couldn't get pregnant, and thus never used condoms (judging by Facebook, her six-year-old kid seems to be doing well).

But there's no reason to depend on urban legends and unstable college suitemates for information about your lady-est of lady parts. We've got the facts on living, lurving, and (if you so choose) making a tiny human being with that tilted uterus of yours. And guess what? None of it is bad news. So lean back (sorry, had to) and get to know a little bit more about what happens when your uterus decides to slouch like a cool kid in middle school.

So, What Exactly Is a Tilted Uterus, Anyway?

In most women, the uterus tips forward, pointing towards the belly, or points straight upwards. When a uterus is tilted, it points towards the back instead. Doctors don't even consider a tilted uterus to be a medical condition — it is what is referred to as a "normal anatomical variance," like when your ring finger is longer than your middle finger.

What Causes a Tilted Uterus?

Typically, a tilted uterus is caused by genetics, and is just something that you're born with. However, on rare occasions, a previously forward-facing uterus can become tilted later in life — some women who have delivered children find that the ligaments that hold their uterus in place have become weakened during pregnancy, causing their uterus to now point to the back. Uteruses also sometimes become tilted due to fibroids or endometriosis.

How Can I Tell If I Have a Tilted Uterus?

Since most women don't experience any symptoms or side effects from having a tilted uterus, almost all tilted uteruses are discovered by OB/GYNs during routine gynecological exams. But some women with tilted uteruses do experience difficulty using tampons, or pain during sexual intercourse — so if that's a problem you've been dealing with, ask your doctor if this laid-back lady bit could be the culprit.

Will a Tilted Uterus Effect My Sex Life?

Most women with tilted uteruses find that it has no impact on their sex life. However, sometimes a tilted uterus can make penis-in-vagina intercourse painful, especially in the woman-on-top position. If you find that getting on top feels uncomfortable, try positions that keep your vagina from being penetrated too deeply, like missionary.

Will Having a Tilted Uterus Make It Harder For Me to Get Pregnant?

Nope! Doctors and my foolish college acquaintance agree, a woman with a tilted uterus is just as likely to conceive as anyone else. Make sure to tell everyone you know!

Will My Tilted Uterus Effect My Pregnancy?

Not much. In the first trimester, those with tilted uteruses may experience more back pain than the average pregnant woman, and on occasion, a tilted uterus might lean on your bladder, making it hard to fully empty (and potentially putting you at risk for UTIs). Also, your doctor might need to use a transvaginal ultrasound (a wand that goes inside your vagina), rather than a transabdominal ultrasound (a device they move across your belly), for sonograms.

The good news is that by the 10th or 12th week of pregnancy, a titled uterus will typically "straighten out," as the uterus "pops" forward into the abdomen to accommodate the baby's growth. If it doesn't "straighten out," however, you could be at risk for miscarriage, so make sure to see your OB/GYN regularly throughout your pregnancy, especially in the early months, so that they can keep an eye on things.

Will It Make It Harder To Get That Tiny Person Out of Me?

No, it shouldn't — though many women with tilted uteruses fear that they will require a C-section, since the uterus has generally moved during pregnancy, it shouldn't present any issues while giving birth, and though there are cases where a tilted uterus causes difficulty while delivering, they are extremely rare.

Hooray! You've become part of the circle of life, all with your buddy the uterus looking in the wrong direction the whole time. You were always such a rebel.