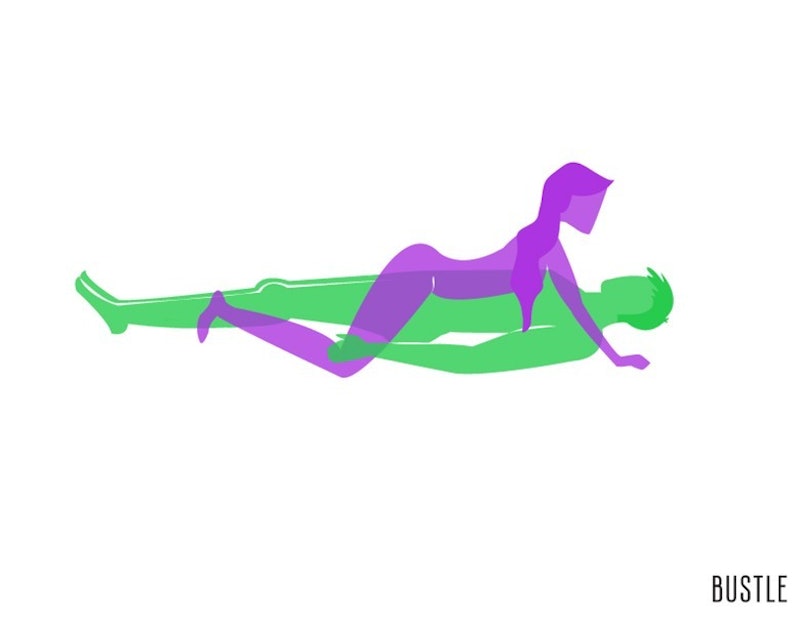 We’re always hearing that we could be having better sex, a better orgasm, or a better relationship. But how often do we hear the nitty-gritty details of how we might actually achieve those things? Bustle has enlisted Vanessa Marin, a licensed sex psychotherapist based in San Francisco, to help us out with the specifics. This week’s topic: The best sex positions to help him last longer in bed.

Q: My boyfriend is awesome, but he struggles with lasting very long during sex. I know he’s trying to hold out, but he usually orgasms in under five minutes. Are there certain positions we can try to help him last longer? I know doggy-style is a no-go, because he could come in less than 30 seconds in that position! We’re able to talk about this openly, and he’s willing to try anything.

A: Five minutes is pretty standard for most men, but that timeline can be frustrating for women, since we require around 20 minutes to reach orgasm! Fortunately, there are plenty of things you can do to help him last longer, including changing up your sex position repertoire.

In general, you’re looking for positions that create relatively shallow penetration, since deep thrusting (like what you do in doggy-style) can send most men right over the edge. You also want positions that encourage slow and steady sex over fast and pounding. Positions that are tiring or tricky physically can also help him last longer, since he’ll have to devote some of his attention to balancing.

You can also try changing positions a few times when you have sex, which will give him an opportunity to take a quick breather and readjust his pace. Here are seven great positions you'll both enjoy.

How to do it: Initial penetration can be a little tricky in this position, but it’s totally doable and worth it. Both of you lay on your sides, facing the same direction. His pelvis should be lower than yours. Bend forward at the hip and lift your top leg, which will help him guide his penis into you. A little lube will make the process easier, too.

Once he’s in place, you can really snuggle up next to each other. He’ll be in charge of most of the action, which will be more like rocking and grinding than thrusting, but you can match his movements. He can wrap his arms around you for additional leverage.

Why it works: This position creates shallow penetration, so he won’t get overstimulated. It also forces you to move slowly and subtly, since he’s likely to fall out if he gets too enthusiastic.

How to do it: Lay on your sides, facing each other. His pelvis should be lower than yours. Lift your top leg and wrap it around his waist. Just like with spooning, penetration requires a little maneuvering here. One of you will have to use your hand to guide his penis into you. You may need to tilt your body away from his a bit, or lift your leg higher. Again, lube is your friend.

Once he’s in, wrap your leg around him tightly. You can initiate movement by squeezing him closer before releasing him, or he can move by gently pulling away and pushing closer. Half the fun is in figuring out how to grind against each other!

Why it works: This is another great shallow penetration position that doesn’t allow for much thrusting. It’s also very close and intimate. It’s a good position to use to take a little break and reconnect with each other.

How to get into it: He lies on his side, facing you. You lie on your back, perpendicular to his body, with your legs draped over the side of his pelvis. Press your crotch up against his and open your legs so he can penetrate you.

He can move back and forth, holding onto your thighs for leverage. You can also push yourself closer to or further away from him, using your legs to initiate the movement.

Why it works: This is a good one because he has a pretty limited range of motion. The penetration is a little deeper than the first two positions, but being on his side makes it tricky to put his full weight into it. It’s great for lazy Sunday afternoon sex, and another good option for taking a break in between positions. It’s also really easy for you to reach down and touch your clit.

How to get into it: Let’s face it — doggy-style is a lot of fun, and having to give it up to help your man last longer can be a bummer! That’s why I suggest this variation. Start off in regular doggy-style, with you on your hands and knees and him on his knees behind you. Then slowly lower your body down to the bed, so that you’re laying fully on your stomach. He should follow along with you so he doesn’t fall out.

From there, he can either lay down on top of you, with his stomach on your back, or prop himself up on his knees, with his legs on the outsides of your legs. The movement is all up to him, but it’s more of a slow grind than the deep thrusting of regular doggy-style.

Why it works: You get the enjoyment of rear entry and the naughty thrill of doggy-style, but without the overly-intense stimulation for him. It’s also a great position to hit your G-spot.

How to get into it: Have him lay on his back with a pillow under his head. Straddle him, with your legs on either side of his body, and ease onto his penis. Then lean forward and prop your body weight on your elbows.

You’re fully in charge here, so you’ll have to read his signals or ask him to tell you if he’s too close. Rock against him slowly, by moving your hips back and forth or in circles. Stop every once in a while to make out with him or kiss his neck.

Why it works: Woman on top can be a little tricky for some men, because the penetration is deep and the view is hot. But if you lean forward, the penetration becomes shallower, your movements become less intense, and you can focus more on kissing and caressing.

How to get into it: Have him sit up with his legs crossed. Slowly lower yourself onto his lap, using your hand to guide his penis into you. Wrap your legs around his back, and your arms around his neck.

You can play around with different angles by leaning towards or away from him. You can move up and down, or grind your hips in tantalizing circles. Or the two of you can synchronize moving towards and away from each other.

Why it works: This is a very sweet, sensual position. You can go slow and take plenty of breaks to make out passionately. There’s deep penetration, but no possibility of intense thrusting.

Sitting In A Chair

How to get into it: Have him sit on a sturdy chair or sofa, preferably with armrests. Face away from him, and lower your butt onto his lap, having him use his hand to guide insertion. Use the armrests for extra support.

You’re the star here, so you can slowly move up and down, or grind your pelvis against his. Or you can stay still and squeeze your PC muscles to pull him deeper into you.

Why it works: This is another position that can be a good alternative to doggy-style. You still get the rear entry, but since you’re in charge of the pace and depth, he can’t get carried away.

Have fun trying out all of these positions! And congratulations on having a guy who is so considerate and willing to work on this with you. Orgasming quickly can be embarrassing, so some men get defensive or refuse to acknowledge what’s going on. If you want even more tips on lasting longer, check out my online program, The Modern Man's Guide to Performance Pressure.

Check Out: The Little Black Book of Sex Positions , $15, Amazon