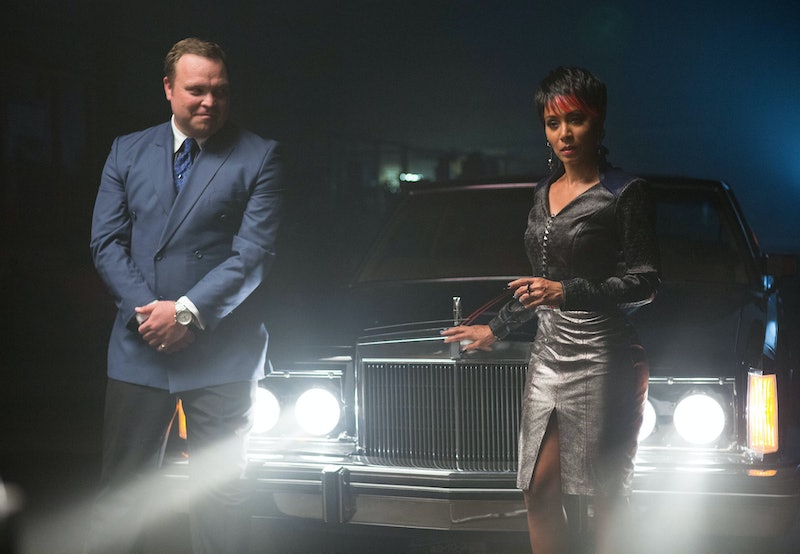 Gotham has returned from break and after one episode back, we're still no closer to figuring out who the Joker is on the Fox series. All this waiting makes my mind wonder, and I've come up with an interesting theory. What if Gotham 's Joker has been Butch Gilzean all along? We don't know much about the minor henchman and that could be intentional. Alfred knows him, which laces him into the mythology more than anything. The series is less of a Batman origin story and more of a villain origin story. This we know. We've watched the rise of Penguin. We anticipate Selina Kyle's transformation into Catwoman and Ivy Pepper's developing villainess Poison Ivy as well. We may not be as excited to see Ed Nygma become the Riddler, but we know it's coming sooner or later. The Joker has been teased with many different villains and bit characters. What if he really has been on the show the whole time? Hear me out. Fish Mooney's second in command, Butch Gilzean, is more of a candidate than you may think.

On Gotham, Butch is loyal to Fish. He's the one who blew up Falcone's cache of money. In last week's episode, "Rogue's Gallery," he killed Saviano rather than join his crew. It didn't look good for a while there. He even offered to hold Fish's shoes when she finally takes Falcone down. What a stand up fella! Who could ask for anything more? He's a friendly guy, as far as mob enforcers go. He's generally cheerful, which is not too common on Gotham.

He could be just a stint in Arkham Asylum, a red hood, or one vat of chemicals away from madness. Here's how I think this is going to go down. His loyalty to Fish Mooney is going to haunt him. I think that something bad is going to happen to Butch as a result of the warring crime families.

It seems likely, whether it happens now or three seasons down the road, that Fish Mooney is going to die. Right? She's not a villain in the Batman comics. Either she's going to reveal herself to be a double agent, or she's not long for this world. That leaves us with Butch, who with his past crimes could easily get doused in the crossfire and undergo the physical and mental changes necessary to become The Joker.

Wouldn't that be tragic? Here is a character that we've grown to love. He's loyal, charming, has great taste in music, and is generally engaging on the screen. He may be a brutal murderer, but we root for him. If Butch lost everything, his transformation into the Joker would be all the more tragic. I think that would be far more effective for Gotham than if the Joker made a guest appearance on the show in a very special episode two years down the road.

Gilzean even dresses the part! Somewhat. Don't think I haven't noticed whenever Butch is sporting a touch of green or purple in his outfit. While there may not be a lot of solid evidence to point to any particular future for this Gotham character, I would keep my eye on Butch Gilzean.