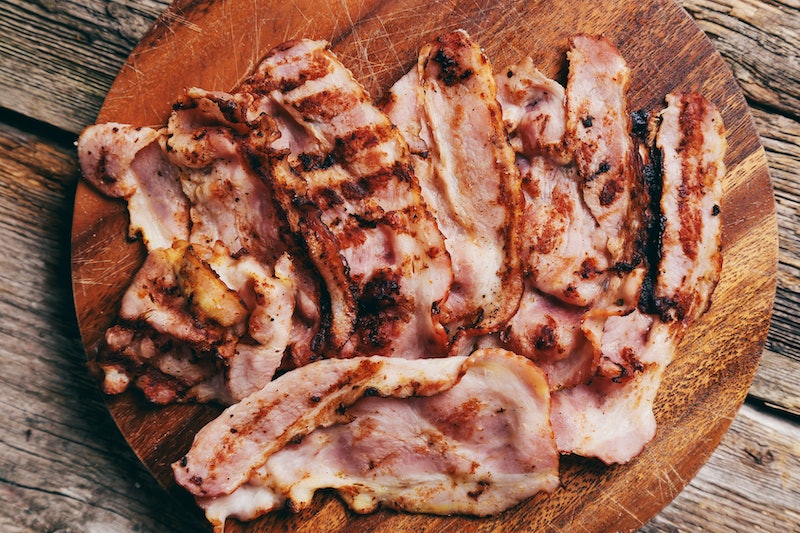 The future is now: Bacon is being used as medical treatment, which means that something we all probably proposed at least once under the influence of alcohol in college was actually a prophecy with more power than we could have known. You may have thought you were well-versed in bacon hacks, but nobody has quite reached the level of Dr. Jennifer Gunter, who introduced us to three of the most surprising medical conditions bacon can fix:

A 4-year-old girl in Michigan had chronic nose bleeding as a result of Glanzmann thrombasthenia (a rare disorder that affects blood platelets), so her ENTs, exhausted out of all their other ideas, essentially plugged her nose with salted pork—and to their surprise, it worked. The salt acted as a clotting agent to stop the bleeding, and has worked in trials they've used since. "We're squealing with pride," said the chair of Stanford's otolaryngology department, Robert Jackler, MD, in a statement to Stanford News. *slow clap for science*

Furuncular myiasis is an infestation of parasites in the skin and soft tissue (sexy!), and causes tissue damage that I urge you not to Google on a full stomach. Treatment usually involves picking out the larvae with tweezers (NO), but using bacon apparently helps lure out the larvae faster (which makes sense, because NOBODY CAN RESIST IT, NOT EVEN LARVAE.)

SURPRISE! You can get lice on your body, too! More commonly known as scabies, the condition is caused by mites that leave rashes on the skin. Although it isn't the preferred modern treatment (there are topical over-the-counter cures), bacon fat can be used as a base for homemade therapeutic treatments made with sulfur and salicylic acid. While it's only 88% effective compared to the 100% of the typical creams, it is wildly cheaper (238 times cheaper, to be exact).

So there you have it, guys: One more reason to indulge at brunch. If you still feel like eating after reading all of this, that is (my bad).

More like this
An Honest Review Of The TikTok-Famous WalkingPad
By Kaitlyn Wylde
The Best Ways To Get Rid Of & Prevent Red Bumps From Shaving, According To Dermatologists
By Madison Barber
Meet The Spice Company Founder Who Sees Chai As A Metaphor
By Madhuri Sathish-Van Atta
Here’s What Sarah Jessica Parker’s Canned Cosmo *Actually* Tastes Like
By Emma Garza
Get Even More From Bustle — Sign Up For The Newsletter