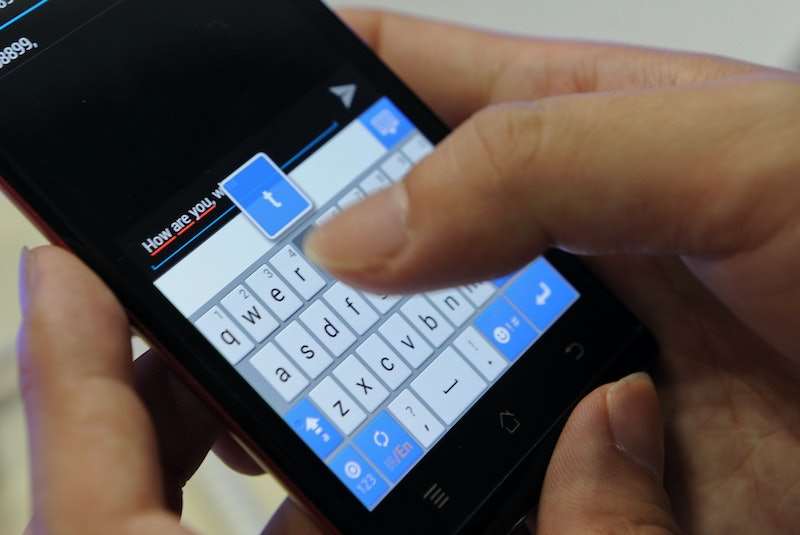 If you had to choose between your smartphone and something else generally thought to be a positive thing, which would you pick? If you’re one third of Americans, you’ll choose your smartphone over sex, according to a recent survey. I’m not kidding. 33 percent of people living in the U.S. actually said that, if they had to pick, they would rather not have sex for a year than not have access to their mobile phone for a year.

I did not participate in the survey, but suffice to say that I am not one of those people.

According to Bloomberg, the survey was conducted by the Boston Consulting Group from September through November of 2014. 1,003 Americans participated; so did consumers in Germany, Brazil, South Korea, China, and India, bringing the grand total of participants up to 7,500. Apparently Americans aren’t the only ones willing to ditch the pleasures of the flesh in favor of the joys of the digital world; about a third of folks in Germany said the same thing, and a whopping three in five people from South Korea did, as well. Only about 25 percent of Brazilians said they’d prefer access to their phones over sex, though, so… at least there’s that? Interestingly, the participants in China and India weren’t asked the phone-vs.-sex question (the reason for this omission isn’t stipulated, but I would imagine it’s a cultural thing); however, about 66 percent of Indians and 55 percent of Chinese would rather give up one of their days off each week for a year than give up their phones for the same amount of time. All I can say is, those phones had better have some pretty astonishing features.

Even more oddly, though, are the other things a surprising number of Americans would give up before letting go of their phones. These include:

In some respects, I suppose maybe it’s understandable; we live in a fast-paced world, and most Americans tend to work absurd hours, so combined, it’s not too surprising that we’d feel chained to our devices. Furthermore, previous polls have found similar results: In 2011, for example, a TeleNav survey also found that a third of Americans would rather give up sex than their phones, although the time frame was over the course of a week, rather than a year. For the curious, other things shafted in favor of the phone include alcohol for 70 percent, caffeine for 55 percent, chocolate for 63 percent, and toothbrushes for 22 percent. A word of advice: It's probably best you stand well back from the folks who opted for their phones over oral hygiene.

But am I alone in thinking that, in spite of all those considerations, it’s still absolute insanity? I mean, it’s a phone. It’s a thing­. An object. Just an object — not a person, or an experience, or any of the other things that make life truly memorably. Pretty much no one is going to die thinking, “Gee, I wish I’d spent more time derping around on the Internet.” For most of us, our biggest regrets at the end of our lives will be about pretty much everything but the Internet: We’re going to wish that we’d seen our friends in person more, not just talked to them via Skype. We’re going to wish that we’d traveled more and worked less. We’re going to wish we’d taken ourselves less seriously and cared less what other people think. And — yes — we’re going to wish we’d unplugged more. The digital world is great and all, but only if we use it wisely. We can’t let ourselves get so mired up in it that we forget to participate in the physical world. That way The Matrix lies, and, well… we all know how that ended. Except that we probably won’t have a Keanu Reeves of our own to swoop in and save the day.

Maybe this is just me, but I think that the more “connected” our world becomes, the more important it is to remember to unplug every so often. So go. Take a trip. See your friends. Have earth-shattering sex. Laugh. Love. Learn. Have an adventure. Those are the things that really make our time on this strange little planet worthwhile.

More like this
How To See The Lunar Eclipse On May 15-16, 2022
By Kaitlyn Wylde
How To Fight For Reproductive Rights, Based On How Much Time You Have
By Courtney Young
TikTok Is Using A ‘Love Island’ Sound To Expose Their Weird Crushes
By Courtney Young
What Is “Night Luxe?” Breaking Down TikTok’s New Aesthetic
By Courtney Young
Get Even More From Bustle — Sign Up For The Newsletter