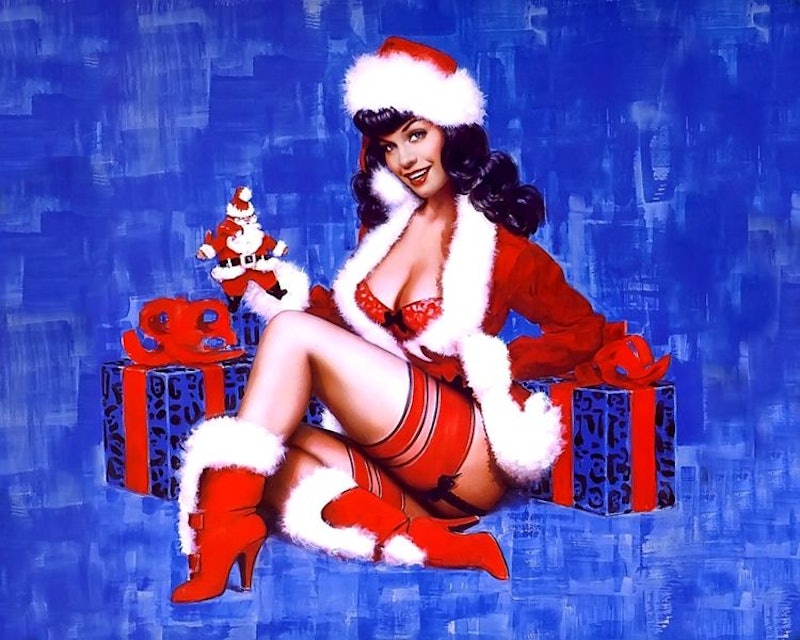 While photoshop as we know it wasn't invented until the 1990s, plenty of other ways to tweak representations of the female body in popular culture were around prior to its existence. Because obviously, where there are culturally ordained beauty ideals, there will be ways to perpetuate those ideals. Looking back at the images of the early to mid twentieth century, there are plenty of examples of old photoshop from the '30s, '40s, '50s, and '60s that prove we've been manipulating the female form to suit cultural beauty standards for a while.

Photo editing software is the chosen tool of the contemporary fashion world, but the OG celebrity and fashion photogs employed their own set of smoke and mirrors to play up an unattainable level of beauty. Negatives were altered to buff away wrinkles and age spots. Actresses were shot in soft focus, (which seems to be done exclusively on women) giving the illusion of even, glowing skin that any desirable lady should naturally possess.

Beyond photo altering techniques, plenty of early ads didn't even feature photographs. Models posed for illustrators, who would use their bodies as templates for cartoon ads featuring women with doll-like faces and hyper-nipped-in waists. Sure, things have reached a certain extreme today, but the fashion and celebrity media have a long legacy of truth massaging when it comes to the female body.

According to Peta Pixel, expert retoucher James Sharp edited this early photo of Joan Crawford (taken by photographer George Hurrell in the 1930s) by backlighting and vibrating the original negative, and smoothing out her wrinkles and freckles using a pencil. The process reportedly look 6 hours. Ahem, does this closely resemble the effect of a healing brush to anyone else?

Sure, these may not be the most OVERT examples of early photoshopping. But the sketches that cover those homemade patterns that you see EVERYWHERE at estate sales definitely exemplify the dissemination of the perfect female body looked like at the time. Instead of showing models wearing the clothing, these packets used the 10-head fashion croquis.

The first sketch, from the 1960s, and the above sketch, from the 1950s, both feature exaggeratedly tiny waists. The New Look fashion of the '50s photo plays up the hourglass shape, while the '60s one evidences a move towards a more straight-up-and-down silhouette. If there were models posing for these sketches (which in all likelihood, there probably were) the illustrator could take license to make the subject thinner and fuller wherever they pleased.

Last year, Retronaut dug up a few before photos that the mid-century illustrator Gil Elvgren used to inspire his ultra-stylized pin-up girl portraits. The most noticeable alterations made by the artist seem to be at the bust line and in the facial features.

Elvgren's subjects were ostensibly given higher eyebrows, for a surprised expression, pinker cheeks, and larger eyes. You can kind of see the early iterations of the Disney Princess cartoon style in them. Also, the models' breasts became visibly pointier.

Not to mention, waists were nipped in. Note the fact that most of the model's right side was shaved off to fit behind the heart in the end drawing.

Both of these ladies got the shrinking waist treatment for their pin-up photos.

You may associate the hyper-soft focus effect with Joan Collins and '80s soaps, but consider how many classic films (circa 1940- 1960) employed this same technique to give an actress the look of smooth-skinned perfection. Another way that this effect was achieved was by slathering a camera lens with vaseline.