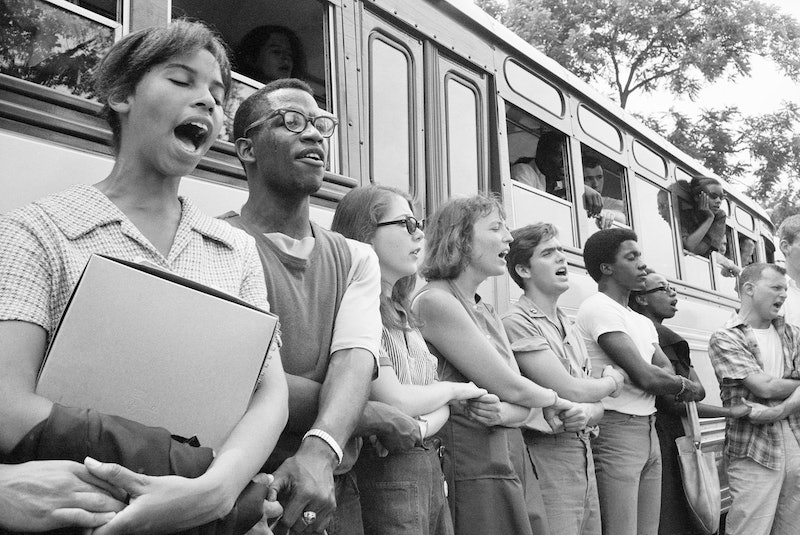 Just a look at 2014's biggest headlines — the deaths of Michael Brown and Eric Garner, the protests in Ferguson and across the nation, and the activism behind the #BlackLivesMatter movement — shows us that the American civil rights struggle, far from being something confined to old newsreels and Hollywood dramas about civil rights in the '60s, is nowhere near over. America is still a land rife with brutal and deadly racial inequalities, a land that hasn't come as far from the days of Jim Crow laws as we'd like to believe. Luckily, we can learn more about our present struggles by examining the struggles of the past, especially the ground-breaking work done by Martin Luther King Jr. and others who fought for racial equality in the '60s.

So whether you've just seen Ava DuVernay's Academy Award and Golden Globe-nominated film Selma — which dramatizes Dr. King's 1965 voting marches from Selma to Montgomery, Alabama, alongside James Bevel and Hosea Williams — and want to learn more; or simply want a good documentary, biopic, or even mystery thriller about the civil rights struggle to check out tonight, give one of the seven films below a shot this MLK Day.

Each of them helps us get an idea of the way things once were, and some of them celebrates the progress we've made — but they also remind us how far we still have to go in the fight for equality in America.

This Academy Award-nominated documentary chronicles 1960s activist efforts to register African-Americans in the South to vote, paying particularly close attention to "Freedom Summer," a 1964 event that brought thousands of college students to the Deep South and led to the formation of the Mississippi Freedom Democratic Party. The film blends current-day interviews with voting rights activists alongside rare archival footage from the era.

Buy Freedom on My Mind here.

This Emmy-winning PBS documentary tells the tale of the more than 400 civil rights advocates who called themselves "Freedom Riders" — black and white activists who worked together, beginning in 1961, to integrate buses in the segregated Deep South by traveling in small racially integrated groups and sitting together on the area's racially segregated buses, violating unjust laws and risking their lives in the process. You can watch it online as part of PBS's American Experience series.

Based on a true story, this Academy Award-nominated historical drama, set in 1964, follows two FBI agents who have been assigned to locate three young civil rights activists who have gone missing in Mississippi while registering black voters. But the agents soon discover they have more than just a simple missing persons case on their hands — the area's local law enforcement is deeply entwined with the Klu Klux Klan.

This HBO documentary covers America's first major marriage equality case — the case of Mildred and Richard Loving, an interracial couple who, because of laws banning marriage between blacks and whites, were sentenced to a year in prison in Virginia for their union. The Lovings took their case all the way to the Supreme Court, and their 1967 landmark case — Loving vs. Virginia — ended all U.S. laws against interracial marriage.

You can also support the legacy of the Lovings on Loving Day, an annual holiday celebrated on June 12 that honors the Loving family and the ongoing fight against racial prejudice.

This Academy Award-nominated documentary, directed by Spike Lee, brings viewers into the world of Birmingham, Alabama in the early 1960s — a city that was a hotbed of both civil rights activism and noxious racism — and then shows how that community was rocked by the 1963 bombing of the 16th Street Baptist Church in Birmingham, Alabama. The crime, perpetrated by Klu Klux Klan terrorists, resulted in the deaths of four young African-American girls, aged 11 to 14, injured over 20 other churchgoers, and is considered by many to be a turning point in the American civil rights movement.

Actually written and shot in the midst of the turbulent 1960s, this dramatic thriller — which won the 1967 Academy Award for Best Picture —focuses on expert Northern police detective Virgil Tibbs, played by Sidney Poitier, who accidentally becomes embroiled in a murder investigation in a small, racist Southern town. Tibbs must simultaneously work to solve the murder and to protect himself from the virulent racism swirling around him.

Stream In the Heat of the Night here.

This Spike Lee-directed bio pic, based on the perennial bestseller The Autobiography of Malcolm X — which netted Denzel Washington an Academy award nomination for Best Actor — follows the life of the civil rights leader, from his youth as a small-time criminal, to his conversion to Islam, his development into a prominent Nation of Islam and civil rights leader, his tragic assassination, and his lasting legacy around the world.