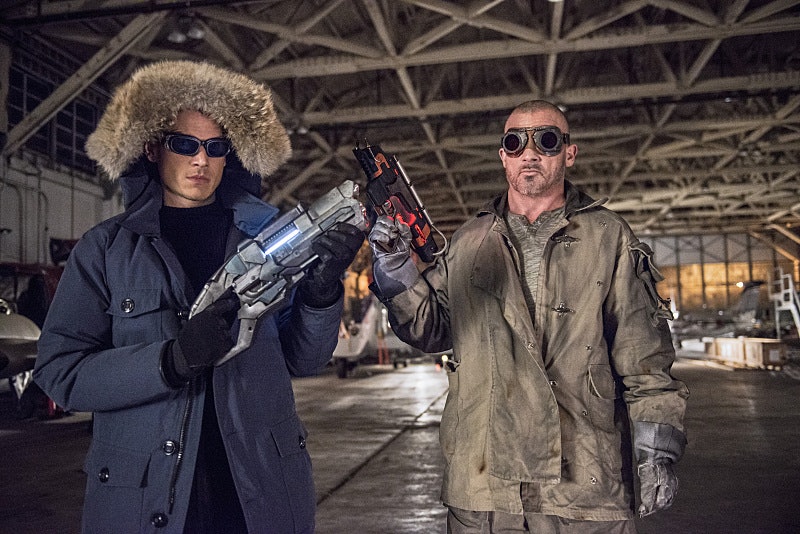 While everyone is focusing on the big reveal that Harrison Wells is Reverse-Flash, we can't forget the other villains in The Flash universe. Captain Cold is making his way back to Central City in a big way with the Jan. 20 episode "Revenge of the Rogues," as we'll see him team up with Heat Wave. Both villains are whip-smart thieves, which is a refreshing change from the superpowered bad guys we usually see Barry Allen fight. Like the Reverse-Flash, Captain Cold is a major antagonist for The Flash in the comics. He's smart enough to know how to hurt Barry — by going after the ones he loves. But will The Flash beat Captain Cold and save Caitlin?

The Flash may be able to save Caitlin, but we'll be seeing much more of Captain Cold beyond the upcoming episode. E! Online revealed a Captain Cold spoiler from an interview with Dominic Purcell, who plays Heat Wave.

"Everyone's very happy with what we're doing. We're excited and the fact that Wentworth and I are in the show. I know that we will be in the finale. Maybe a few more before that. The possibility for us to keep coming back and forth is high."

So, what does this spoiler mean for the future of the show? We'll be seeing a lot more of Captain Cold on The Flash. Also, considering that another important villain, Trickster, is appearing on The Flash in the future, I would put money on seeing the formation of The Rogues.

Don't know about The Rogues? Well, they're a set of criminals who, in between robbing banks and causing a ruckus in Central City, are major foes for The Flash. Captain Cold and Heat Wave are the most important members of that group, so I don't think it is a coincidence we're seeing them fleshed out the earliest. Other members of the group include Weather Wizard, The Pied Piper, and Mirror Master. Since both Pied Paper and a second version of Weather Wizard are also set to appear on The Flash, it looks like Barry Allen won't be catching a break anytime soon. While the formation of the Rogues definitely makes sense, considering Captain Cold is being written as a long-term villain, that isn't his focus right about now.

In an interview with Entertainment Weekly, Wentworth Miller, who plays Captain Cold, revealed what's ahead for his character and said, "I have heard rumors that there is a larger plan, but at the moment, Snart is eager to reestablish himself as top dog and he’s willing to do whatever it takes to make that happen."

Does that mean we may see Captain Cold gain the superpowers of his New 52 comic book counterpart? Maybe. But there is still no indication that Captain Cold will gain any metahuman abilities. However if he sticks around on The Flash long enough, I wouldn't be surprised to see that happen.