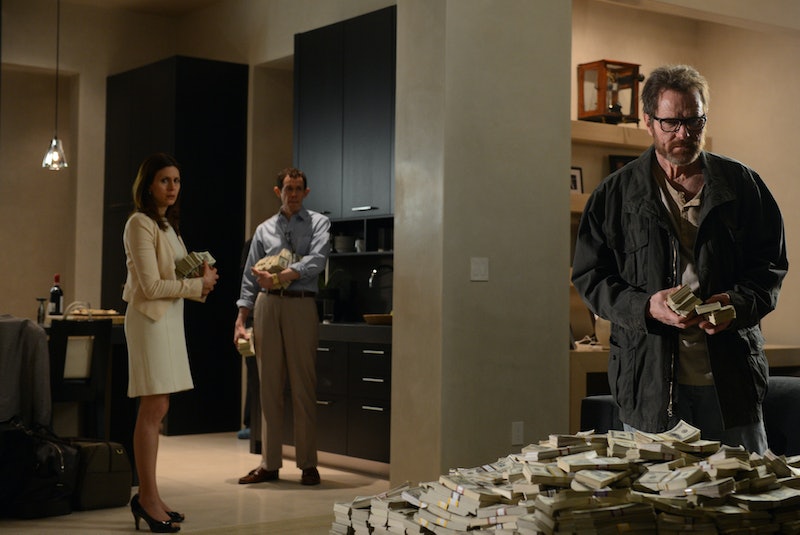 So we can all agree that the Breaking Bad finale was perfect. It may not have been the most exciting or surprising TV finale that's ever aired, but it was a hugely satisfying conclusion that answered almost all of viewers' questions. (Plus, Aaron Paul's Jesse lived. That's all anyone really cares about, anyway.) Still, there are a few loose ends from the show's five seasons that creator Vince Gilligan chose not to address. We probably won't ever get our answers, so we figured the next best thing would be attempting to answer them ourselves using existing evidence and some choice quotes from our creator. So what are our 10 remaining questions from Breaking Bad? Read below?

1. What Actually Happened Between Walt and Gretchen?

One of Gilligan's best decisions of this season was to bring back Gretchen and Elliott, the billionaire co-founders of Gray Matter and ex-friends of Walt. When Walt sees them on TV, fervently denying his involvement in their company, he gets furious. Viewers assume that seeing his former friends destroy the last remainder of his legacy is what drives Walt over the edge and back to Albuquerque, but while maybe that's true, the Schwartz's role in the finale was much bigger than any of us could have imagined. Walt threatens the couple into giving $9 million to Flynn, and now, knowing that his family will be taken care of financially, Walt can rest easy.

This is all great, and the re-introduction of characters we thought were long gone was a brilliant move by the writers. Still, it's frustrating that we'll never know exactly what transpired between Walt and Gretchen, way back when, to cause his hatred for the couple. We know they dated, and that one weekend, when Walt stayed with Gretchen at her parents' house, he left suddenly for unknown reasons. Now, he claims Gretchen and Elliott ruined his life. But what actually happened that weekend?

Answer: We assume Gretchen cheated on him with his best friend, Elliott. Out of anger, Walt sold his share in Gray Matter for a measly $5,000, and now, the company's worth $2 billion. Yeah, that would constitute holding a grudge.

2. Where Does Jesse Go Now?

Jesse is alive! Let's all take a moment to celebrate that fact. Everyone loves Jesse, and there was nothing more satisfying in the finale than watching him maniacally drive away. But there's still one big question... where does he go now? He's a free man, but has no money, no ID, nothing on his person. What's he going to do?

Answer: His first priority is Brock. Jesse has always been devoted to that child, and now that Andrea is dead, Brock has no one to care for him. Jesse will step in, and, thanks to all the money he's secretly provided for them, they'll manage to make ends meet. Most likely, they'll move somewhere far, far, away, where Brock can have a normal childhood and Jesse can start over as a pre-school teacher. Sure, that last part's a little far-fetched, but seeing how great Jesse is with kids, we can hope, right? At least, on Sunday night's episode of Talking Bad, that's what Jonathan Banks, Mike Ehrmantraut himself, determined Jesse would do.

And from Vince Gilligan: "Some people might think, ‘Well, he probably got two miles down the road before the cops nailed him.’ But I prefer to believe that he got away, and he’s got a long road to recovery ahead, in a sense of being held prisoner in a dungeon for the last six months and being beaten to within an inch of his life and watching Andrea be shot. All these terrible things he’s witnessed are going to scar him as well, but the romantic in me wants to believe that he gets away with it and moves to Alaska and has a peaceful life communing with nature.”

3. What Happened to Huell?

This one is going to drive us crazy unless Vince Gilligan gives some answers. A few episodes ago, Huell, Saul's dimwitted but intimidating bodyguard, was taken by the DEA and questioned about his co-workers' whereabouts. The agents, wanting information about where Walt's money is held, convince Huell that Walt's already killed Jesse, and that he's next on the list. The terrified bodyguard spills, and Hank and Gomie persuade him that it's not safe to leave the safehouse. So for all we know, Huell is still sitting there, months later, scared out of his mind to walk out and leave. What happened to Huell?!

Answer: He moves his family into the house and starts a sitcom called Huell's Rules! Well, at least according to Funny or Die, which made this amazing video about Huell's post-Breaking Bad life.

Back in Season 2, Donald Margolis, an air traffic controller and the father of Jesse's girlfriend, Jane, was a minor but hugely influential character. He owned the building where Jesse lived, and threatens to turn a drug-using Jesse into the police unless his daughter goes back to rehab. Jane promises she will, but the very next day, Donald discovers that Jane has died from an apparent heroin overdose. When he goes back to work after too short a break, he mistakenly causes a collision and the deaths of hundreds. The accident becomes national news, and Donald's responsibility is questioned. Soon after, it's learned that he shot himself. But did he die?

Answer: Probably, but it doesn't really matter. The point of Donald's gunshot wound, as well as the plane crash itself, is to make Walt feel guilty. Walt was the one who let Jane die, which, of course, caused her father's grief. If Walt had saved Jane, hundreds of people wouldn't have died, and Donald wouldn't have shot himself. Of course, Walt being Walt, he feels guilty for a hot second, and then moves on.

5. Did Hugo the Janitor Get His Record Wiped Clean?

It's been a long while since Hugo, a former janitor at Walt's high school, was mentioned on the show, but that doesn't mean we don't still care about his fate. Hugo was a good guy who covered Walt when he got sick at school from chemo, and when the D.E.A. discovered missing meth-making equipment from the classroom labs, he, not Walt, takes the blame. The agents find no meth in his home, but they do find marijuana, and he's arrested. We later discover that he was possibly murdered by drug addicts (the man murdered by the ATM thieves looked a lot like Hugo, but was it really him?) — but once the true identity of Heisenberg was revealed, did Hugo get his record wiped clean?

Answer: Not yet, but he will. It's only been a short few months since Walt was discovered to be Heisenberg, so the D.E.A. probably hasn't gotten around to erasing the criminal record of a dead man. Still, while it may not be the agents' first priority, we have good faith that eventually, they'll remember their wronged suspect and clear his name posthumously.

6. Does Kaylee Get Her Money?

Mike (R.I.P.) may have been a criminal, but he was a devoted grandfather who wanted nothing more than for his young granddaughter, Kaylee, to be taken care of in the event of his death. He set up a trust fund for her 18th birthday, but when his lawyer is caught by the D.E.A. depositing Mike's money into safety deposit boxes, it's unknown what happens to the fund. Will Kaylee ever get her millions?

Answer: Unfortunately, probably not. It's more likely that the D.E.A. found and seized all the money, and that little Kaylee will never even know that her beloved grandfather tried to give her millions of dollars. All she'll know is that one day, she was playing at the park with her grandpa, and the next, he was gone, leaving her alone on the swings. Now that's depressing.

7. Will Ted Rat Out Skyler?

At this point, Ted Beneke's probably not even a blimp on Skyler's radar, but maybe she shouldn't write him off so easily. Back in season three, Skyler arranged for Ted to pay off his IRS debts with Walt's drug money. She told Ted that it was "lottery money," and it seemed like he believed her. Once it was revealed, though, that Heisenberg was Skyler's husband, Ted might've put two and two together and decide to rat Skyler out. She may have scared him into silence, but what's to say that he keeps it, now that the real threat — Walt — is dead?

Answer: He won't. True, Walt's gone, but Ted has no idea if the man worked alone or if there are a dozen hitmen out there happy to murder anyone who reveals the truth. He might be craving revenge, but he won't take the risk of ratting Skyler out to the police. It's just not worth it.

8. Will Drew Sharp's Family Find Out What Happened?

The death of Drew Sharp had major impact on the series' main characters, showing us Todd's true character, Jesse's anguish, and Walt's remaining humanity. The poor teenager did nothing to warrant his death except be in the wrong place at the wrong time, and yet he was murdered in cold blood by Todd. All evidence of Drew's death — including his body itself — is disposed of by Todd, and so his unexplained disappearance becomes major local news. Later in the show, a guilt-ridden Jesse attempts to give $5 million to Drew's family, but Saul rebuffs his efforts. Now that Heisenberg is gone, will Drew's parents ever find out what happened to their son?

Answer: Yes. When the police raid the Neo-Nazi's meth lab, they'll undoubtedly find Jesse's confession tape, in which he reveals what happened to Drew in the desert. His family will be devastated, of course, but at least they'll finally know the truth.

Have we ever actually met Louis, the supposed best friend of Walt Jr.? Sure, he's appeared in a few episodes spread throughout six years, but that seems hardly enough to warrant best friend status. It feels like he's been mentioned more times than we can count, but we've only seen him in person a handful of times. Is Walt Jr. making him up? Is Louis even real?

Answer: We guess. After all, Walt suggests to Flynn that he send the White family money to Louis' house, since their own mail is being watched by the police. Walt's a pretty smart guy, and we don't think he'd be sending millions of dollars to the house of a teenager who may or may not exist.

10. What Happens to the Rest of Walt's Money?

So $9 million of Walt's massive fortune is going to Walt Jr., via Gretchen and Elliott. But what about the other 70-something million? Jack and his fellow Neo-Nazis stole it when they were all in the desert, but now that they're dead, what happens to the money?

Answer: The government takes it. It'd be great to think that the wealth got spread between Jesse, Brock, Drew Sharp's family, Marie, Kaylee, and other deserving individuals, but chances are, it was kept by the government after they seized the meth lab. What a waste.