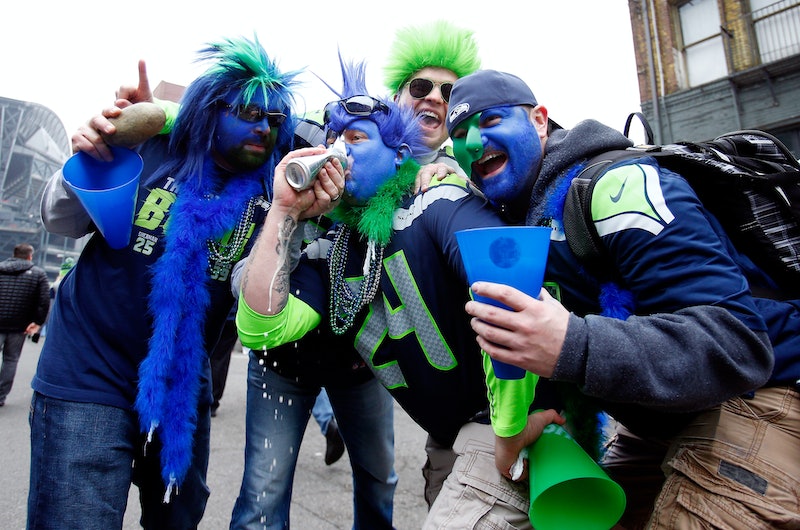 For the last 27 years I've been waking up on the first Monday in February hungover as all hell. You might think that's impossible since that timespan includes ages 1 to 10, my formidable years, and also my entire adult life. But realistically every human in America suffers some sort of hangover on Super Bowl Monday even if they haven't touched a drink in five years, even if they claim they hate football, and even if they happen to be children (or adults) who don't drink. I make this ~craZzy~ claim because I am fairly sure that people do not tend to their children on Super Bowl Sunday as well as they actually would the other 364 days a year. New Year's Eve is also pretty questionable.

I mean come on, we've got people binging on food (all praise every chicken wing recipe), binging on booze, binging on shots, and just binging on TV in general even if they hate football. So that leads to an entire treasure trove of "Pick Your Own Endings" that will make you equally miserable on Monday. We've got food hangovers, beer hangovers, booze hangovers, not-enough-sleep hangovers, and the ultimate All-Of-The-Above hangover sampler platter for those who really like to get wild.

I bet there isn't a single Super Bowl party in the entire nation where someone does not utter these six fateful words: "Why do I have work tomorrow!!!" Did I also mention that the day after the Super Bowl is a freaking Monday? Hi CIA, this is the definition of cruel and unusual punishment, in case you still needed clarification.

If some government agency with powers greater than mine (Hey NSA, I'm looking at you now) took the time to monitor actual productivity on THAT Monday morning, my guess is that it'd register at about a negative 10 on any scale (I know we've got the Richter, the Bechdel test, whatever just go ahead and try to measure it).

I know people have tried before to declare the Monday after the Super Bowl a national holiday and failed. I know I've for sure already signed another (now closed) Super Bowl Monday petition. But it's time we get enough signatures (100k! We can do this! Call your in-laws right now!) to make this a potential reality. Also, Obama, I know you love sports. Please sign my petition.

(Yeah, What they said!!! But once more until this is a reality!)

Honestly if Texas can continue to try and just up and leave the union every other month, we should at the least all have off of work on Super Bowl Monday.

Since I've been conducting this incredibly scientific research by waking up every single Super Bowl Monday for the last 20-plus years straight up miserable, I've decided to do something about it. Please sign my official petition to make Super Bowl Monday a national holiday if you're with me, or even if you just really need any excuse not to go into work for a day (Hint: that's literally all of you).

You know how that old saying goes. If not me, who? If not now, then I will definitely have to go to work on Monday Feb. 2 with the world's worst hangover of all time. (I'm the sampler platter-hangover type of chick.)

Please sign my petition: Help Make The Monday After The Super Bowl A National Holiday Because We All Need a Day Off

More like this
16 Trader Joe's Appetizers That Are Total Party-Pleasers
By Kaitlyn Wylde
The 2023 Super Bowl Commercials Feature A 'Breaking Bad' Reunion & Missy Elliott
By Alyssa Lapid
'Breaking Bad' Duo Walt & Jesse Are Back — In This Super Bowl Commercial
By Jake Viswanath
Dunkin’s Valentine’s Day Lineup Includes A Drink That Tastes Like Dessert
By Alexis Morillo
Get Even More From Bustle — Sign Up For The Newsletter
From hair trends to relationship advice, our daily newsletter has everything you need to sound like a person who’s on TikTok, even if you aren’t.