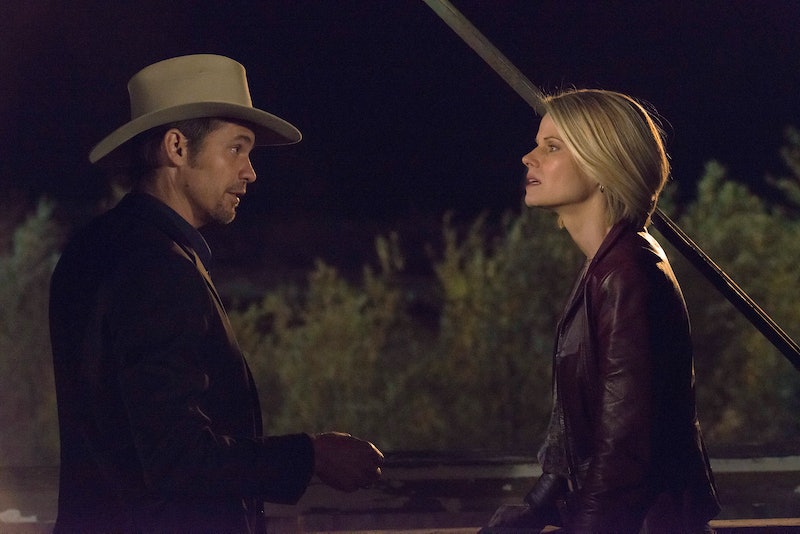 It's been a long time coming, but the final season of Justified is finally upon us. Last season ended with Raylan putting off his transfer to Florida so that he could go hunt down Boyd once and for all. These two have been all up in each other's business for five years now, so there's no way Raylan Givens was gonna let that one go. Season 6 is the beginning of the end for Justified fans, and the premiere episode looks like it starts things off with a bang: it seems little Kendal Crowe has been kidnapped! That's an episode you don't want to miss. But if your Tuesday nights are a trifle busy, don't worry. Here are all the ways to watch Justified 's Season 6 premiere online and on-demand.

In addition to baby Crowe getting taken, this final season promises even more drama and bigger crimes than ever before. Ava is currently working with the U.S. marshals to bring down Boyd — a position that puts her in a whole lot of danger, and gets her further mixed up in Raylan and Boyd beef. Oh, and Boyd's planning to rob a bank, like you do. Here's a teaser for what's in store for Justified fans in Season 6.

Now, how could you miss that? Well, you don't have to. Here's how to watch online and on-demand.

Like a lot of cable networks, FX allows customers who already watch shows on their TVs also watch them on other devices, which is pretty nice of them. If you've been watching the good people of Harlan on your tube, just head over to FXNow's site, plug in your subscriber information, and you're good to go, free of charge. Unfortunately, you're going to have to wait until the day after the premiere to find out what Raylan, Boyd, Ava and the rest of the crew are up to now.

If you're a cable subscriber, you can also watch the Justified premiere on Hulu (and even if you don't pay for FX, you can still watch clips from the episode, behind the scenes footage, and scenes from future episodes). Like FXNow, Hulu also doesn't put new episodes up until the day after they air, so avoid spoilers at all costs! The downside to this service is that you can only access the shows through a computer, not a phone or other mobile device. I'm sure a few minutes alone with Boyd, and Hulu would be happy to change that policy.

Finally, a way for cord cutters to keep up with our favorite U.S. Marshal. If you don't pay for cable (or own a TV at all), you can still watch the Justified premiere. Like most TV episodes, iTunes offers episodes of Justified for $2.99 a piece, or the whole season for $34.99. There are already some short segments about Season 6 available on the site for free. Google Play is the cheaper option, with each episode available for $1.99, and the whole season for $22.99. Unfortunately, it seems like FX really wants you to watch their shows on an actual television, so you won't be able to buy the first episode of Season 6 until the day after it airs. What is this, 2005?

Still, you need your Justified fix, and waiting 'til the whole season turns up on Netflix just isn't an option. Oh, the things we do for good TV.