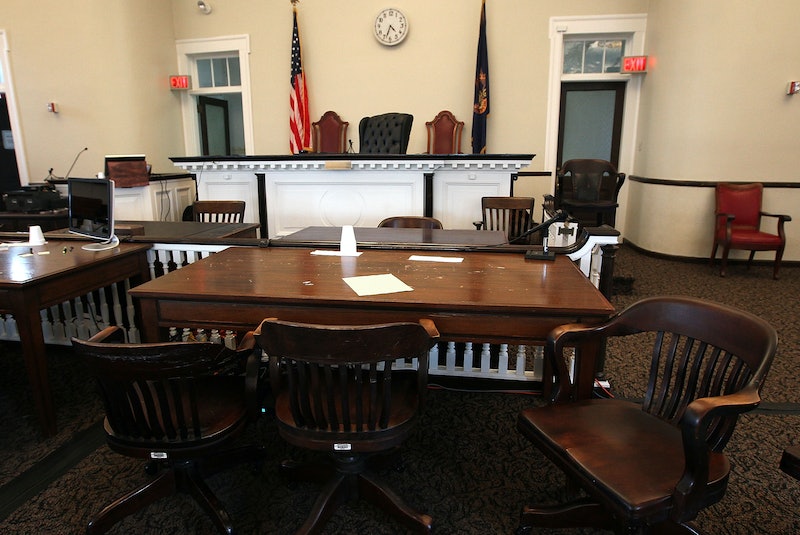 Yet another high-profile legal proceeding is kicking off this month, and it's generated a lot of press, controversy and angst: the trial of James Holmes, for a grisly mass shooting at a premiere of The Dark Knight Rises in an Aurora, Colorado movie theater back in 2012. Even if you haven't followed the story closely since then, you might remember Holmes' disturbing, post-arrest visage — dressed in a prison jumpsuit, with a vacant look, and a shock of bright orange hair on his head. Well, that's all changed now: courtroom sketches have shown how James Holmes looks now, and suffice to say it's altogether different.

Jury selection in the Holmes trial began Tuesday, and and and whoever ends up getting picked will likely face some particularly gruesome testimony. Holmes is charged with killing 12 people, as well as over 100 counts of attempted murder, a slate of crimes which could earn him the death penalty if convicted. Whether he gets that conviction, and what kind of sentence he receives, will likely boil down to the jury's assessment of his mental state at the time of the crime — neither his lawyers nor his family are attempting to argue he didn't actually commit the massacre, but are arguing he's not guilty by reason of insanity.

As is often the case in legal proceedings, cameras are barred, leaving the job of conveying the scene up to professional sketch artists. And the sketches that emerged from the courtroom Tuesday illustrated a pretty dramatic change in appearance for Holmes — head and facial hair neatly trimmed, thin-framed glasses, and appearing for the first time since the shooting in everyday garb, with a collared shirt and sport coat.

It's not the first time Holmes has appeared without the striking orange hair that he had at the time of the shooting, having previously appeared in court with dark hair and a scraggly, unkempt beard, but this is the first time we've seen what he'll presumably look like over the course of his trial.

According to Yahoo News' Jason Sickles, the the changes were so pronounced as to make Holmes almost unrecognizable, leading to some observers in the room doing surprised double-takes. While he was not handcuffed, according to Sickles, he was still tethered to the ground by means of an unseen cable as he chatted with his attorneys.

While it's taken a very long time for proceedings to actually begin — over two-and-a-half years since the Aurora shooting, all told — things aren't expected to speed up anytime soon. According to The New York Times, the process of jury selection could still take months, owing in large part to the horrific and highly visible nature of the crime. Getting an impartial, untainted jury pool in a case like this, within the state of Colorado no less, is an enormous undertaking.

More like this
'Sherwood’s Filming Locations Hold Deeper Meaning
By Rachel Mantock
Where Is Oscar Torres In 'Only Murders In The Building' Season 2?
By El Hunt
Yinka Bokinni Recalls Terrifying Truth At Heart Of 'How To Hire A Hitman'
By Frances Stewart
James Marsden Kept Teddy’s Westworld Season 4 Return A Secret “For Years”
By Brad Witter
Get Even More From Bustle — Sign Up For The Newsletter