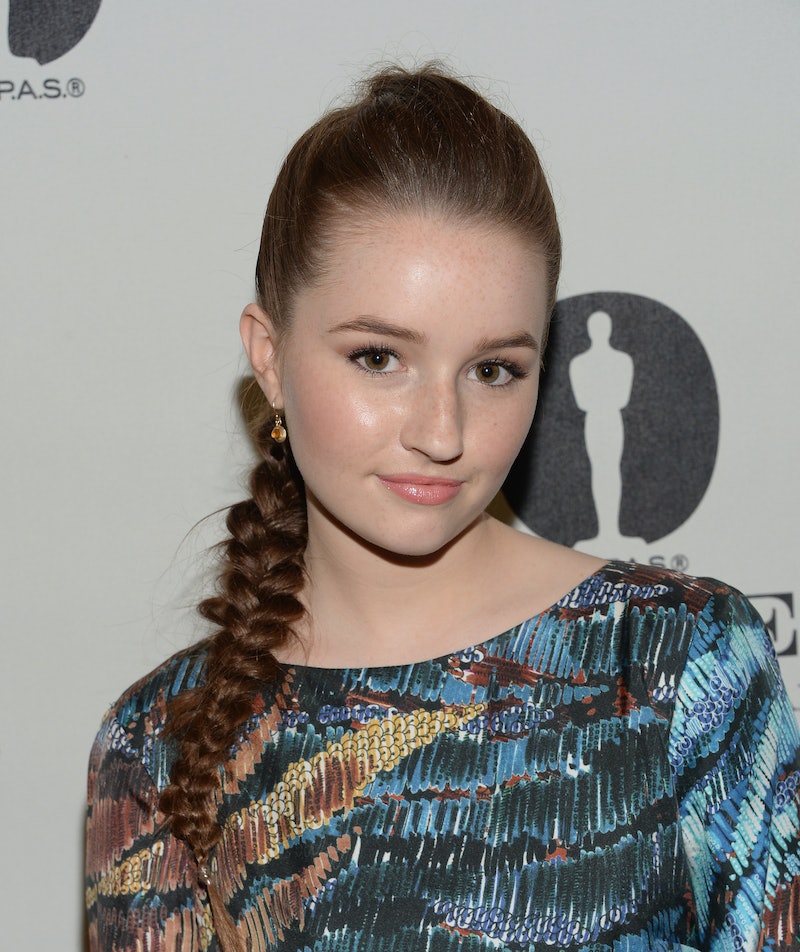 It's safe to say Kaitlyn Dever had a pretty good summer. In the span of just a few months, the 16-year-old actress appeared in one of the best reviewed movies of the year, The Spectacular Now , starred in another, Short Term 12, which garnered even better reviews, and shot two more films, Laggies and Grass Stains, both of which will be released in 2014. Add that to a main part on ABC's Last Man Standing, critical acclaim for a just-ended recurring role on Justified, and praise from The New York Times, and it's hard to imagine that anything could top the summer Kaitlyn Dever just had.

And yet she's already planning her next move.

"I've recorded two covers with my sister, and we're going to try and put them up on YouTube," Dever said in a phone interview with Bustle. "We're trying to form a band."

And what were you doing at 16?

Dever, whose first notable role — a supporting part in a direct-to-video American Girl film — didn't come until 2009, has already worked alongside the likes of Cameron Diaz, Diane Lane, and Leonardo DiCaprio. She's guest-starred on Modern Family and Curb Your Enthusiasm, has been directed by Clint Eastwood, and last year spent 11 episodes co-starring on FX's critically beloved drama, Justified. In 2012, she earned three Young Artist Award nominations. Her next film, Lynn Shelton's Laggies, has her working alongside Keira Knightley and Chloe Grace Moretz.

"To be able to do so many different things, to go from the show [Last Man Standing] to The Spectacular Now and Short Term 12... I'm unbelievably lucky," Dever said.

It's these movies, two of the most critically acclaimed, audience adored films of the year, that cement Dever's status as a talent to watch. In James Ponsoldt's The Spectacular Now, Dever plays the protective best friend of star Shailene Woodley, whose relationship with wild Sutter (Miles Teller) threatens the closeness of the girls' friendship. It's a small role, but Dever makes it matter. Thanks in large part to the ensemble cast's performances, the movie's earned an impressive 91 percent on Rotten Tomatoes, and has critics talking Oscar.

"It feels like all of it started a long time ago," Dever said, "but it’s only the beginning."

In August's Short Term 12, about the workers and residents at a group foster home, Dever stars as Jayden, a troubled teen whose painful family life and fondness for cutting resonates with the film's lead, Grace (Brie Larson). The film, directed by Destin Cretton, garnered fantastic reviews upon its release, with critics declaring it one of the best movies of the year. Seemingly all of the film's actors received enormous praise for their performances; Dever, in particular, had critics calling her performance "razor-sharp" and "a raw walking wound."

Jayden, a sullen, guarded teen with an attitude problem, could've easily been a cliché. Said Dever, "she could've been this typical goth, depressed teenager who cuts herself."

In the talented hands of Dever,though, she's a revelation. Her words are honest, her actions understandable; Dever brings us into Jayden's world, even as Jayden, herself, resists.

The sarcastic, defensive Jayden earns viewers' sympathy easily, but it's her sisterly relationship with Larson's Grace, a 20-something who sees herself in the troubled teen, that becomes the heart of the movie. Jayden and Grace are strikingly similar, both dangerously smart and terrified of vulnerability. Almost involuntarily, they form a close bond, and it's the most intimate and affecting relationship in the film.

Short Term 12 isn't the first collaboration between Dever and Larson, but it's by far the most substantial. They both have supporting roles in The Spectacular Now, but the two never share a scene. In Short Term 12, though, practically all of Dever's scenes are with Larson, and the actors share a chemistry so strong that it's hard to believe they haven't worked together more.

"Brie's the best person to work with," Dever said. "She's been in the business for a really long time, and she knows exactly what she's doing. Just being in her presence on set... I could go on and on about how good an actress she is."

Like Dever, Larson is getting major critical attention for her role in the film, even prompting talks of a possible Oscar nomination. It might not be the only honor the film could receive from the Academy, though; a heartbreaking rap performed by 18-year-old Marcus (Keith Stanfield) has some critics predicting a Best Song nomination.

"It feels like all of it started a long time ago," Dever said, "but it’s only the beginning."

One of the main praises bestowed upon Short Term 12 is its portrayal of the foster care system, a topic rarely discussed in the media. Many of the movie's scenes are uncomfortable and difficult to watch — but more importantly, they're honest.

"That's what I loved about the script," Dever said. "It's just very, very real."

Much of that had to do with the direction of filmmaker Destin Cretton, who "encouraged us [the actors] to do what we wanted with our characters," Dever said.

She continued: "Nothing was contrived or too planned out. Destin wanted the actors to move where they wanted to move, to bring our own ideas... I think that's why it's getting such great reactions. It's just real."

"I've always loved music, and I've been singing and playing guitar since the second grade."

Dever's next film, Laggies, may not be as emotionally exhausting as Short Term 12, but it'll definitely contain its sense of honesty. Laggies stars Keira Knightley as Megan, a 20-something whose young-at-heart mentality clashes with her impending engagement, and so she befriends a band of teenagers, led by Annika (Chloe Grace Moretz). Dever stars as Misty, "the craziest of them all."

Playing the loud, hard-partying teen will also be a nice break for Dever, who tends to gravitate towards darker roles.

"It's cool to have a more comedic character," she said. "She's a fun one to play."

It won't be a long break, though. After Laggies, Dever will star in another drama, Kyle Wilamowski's Grass Stains, about a teenager (Mud's Tye Sheridan) whose involvement in a prank that killed the brother of his girlfriend (Dever) causes him enormous guilt.

Dever recently got another offer, but can't divulge any details, saying only that it's "really cool" and "very exciting."

Right now, though, Dever is focused on the immediate future: promoting Short Term 12 ("I’ll be sitting in a theater watching the film with one audience and they'll be crying at the serious scenes, but then another audience will be laughing, and it's weird"); working on Last Man Standing, and, of course, releasing her music.

"I've never really written anything before, but one day I decided to start writing songs," she said. "I've always loved music, and I've been singing and playing guitar since the second grade."

Of course she has. Don't expect Dever to end her overachieving streak anytime soon, though.