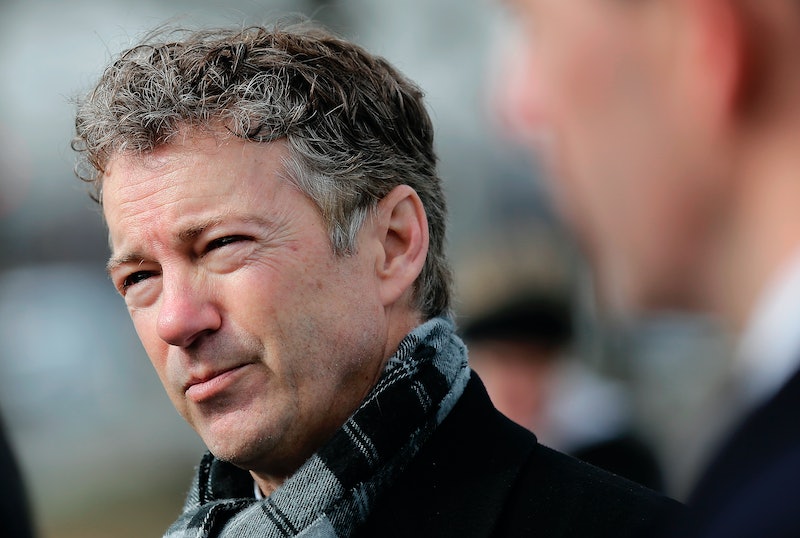 If you were a senator watching President Obama deliver his State of the Union address, what do you think you'd do to pass the time? Sure, you could sit there coolly, listening patiently and respectfully, but let's be honest — plenty of elected officials are neither patient nor respectful, as past such addresses by Obama have shown, and admittedly, these events do sometimes drag a little. Well the junior senator from Kentucky has an idea: Rand Paul trolled Obama with a Willy Wonka meme on Twitter, and it's... well, not terribly mature.

One of the central proposals that the White House teased ahead of this address was the idea of making two years of community college free for American students, a bold proposal guaranteed to rankle some conservatives. And rankle it did — Senator Paul isn't exactly down with the concept of government aid, as he's proven countless times before. Nor is he down with the very concept of "free," as a lot of conservatives aren't. You've heard the quote "there's no such thing as a free lunch," right? That's basically the underpinning of Paul's joke, though the form it actually took was one of the internet's most familiar (and frankly, irritating) memes: the condescending Wonka.

Look, I'm not naive about these things — it's entirely possible that this tweet was sent by a staffer, or was prepped ahead of time. After all, the transcript of Obama's remarks rolled out about 20 minutes prior to the start of the address, so Paul and everybody in Washington knew exactly what Obama was going to say before he said it. Furthermore, Obama himself was beyond a little playfulness in his speech, lightly taunting the GOP over his two presidential election victories. So to some extent, turnabout is fair play.

But it's also a little disappointing, for two reasons. First, a reasonable government expenditure to ensure community college access for millions of Americans is a worthy and wonderful idea, both practically and philosophically, so the mockery is annoying.

Second: that Willy Wonka meme is about as played out as it gets, and frankly, it's disappointing. As Paul proved during his 2014 Festivus tweets, his troll game can be much, much better than this. Given his past history of clever social media ribbing, this is a step backwards. What's next, Lolcats? Come on, Rand, step it up.