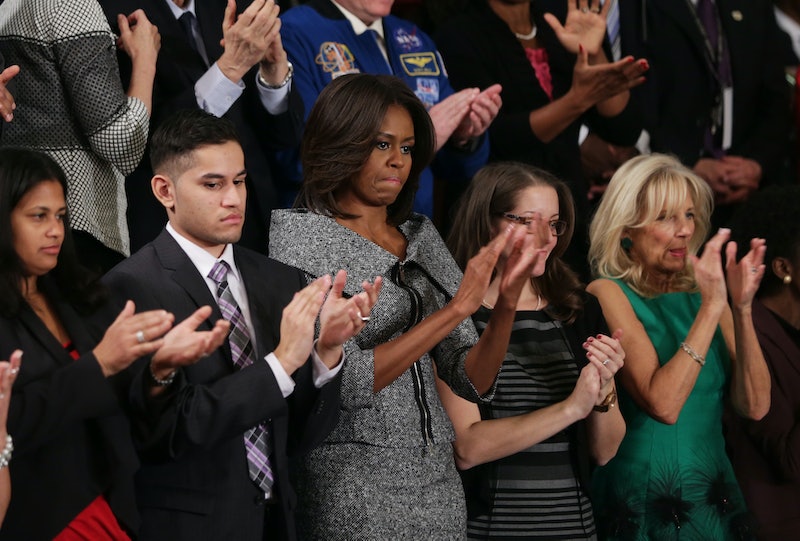 Despite all of the conflict and tension in politics, all of the partisan arguments and critique of President Obama, one thing has always rung true: Michelle Obama is a stylish and unique FLOTUS. There's literally no argument to be made to the contrary. And at President Obama's State of the Union address on Tuesday night, FLOTUS wore an outfit that while impressive and stylish yet again, look eerily similar to quality TV fans. Why? Because it was an outfit worn by another high-powered political lady: Alicia Florrick on The Good Wife. That's right Julianna Margulies' character on the hit CBS series was seen in this exact awesome look by Michael Kors. This brought a few questions to my attention: Do you think the First Lady watches The Good Wife and falls in love with the fashion just like I do? Do you think Michael Kors knew FLOTUS and Florrick's outfits were the same? And how do we feel about FLOTUS in the outfit? Obviously, that answer is that she looks amazing, because duh.

Michelle Obama and The Good Wife fans took to Twitter to talk about the great fashion move. But rather than start a heated debate about who wore it best, most fans just applauded FLOTUS for the move, which makes me so happy, because why on Earth would we want to pit women against each other for both choosing an chic and well-made outfit? Here's the outfit in question:

Most people were quick to jump on the FLOTUS' Good Wife look:

And unsurprisingly, the popularity of the outfit rose tenfold after FLOTUS' stamp of approval.

But surprisingly, quite a few people were actually more annoyed at the fact that FLOTUS' appearance was more important to so many people rather than her and her husband's views:

This tweeter is certainly not wrong. Of course there were those who wondered how regular a viewer FLOTUS is of The Good Wife.

And as always, some people just could not care less.

All I have to say is that if First Lady Michelle Obama really is looking to different shows for fashion tips, Alicia Florrick's wardrobe and many other outfits on The Good Wife are definitely great places to start.

More like this
Here’s How Lizzo Is Supporting Abortion Rights After The Roe v. Wade Reversal
By Brad Witter
'The Undeclared War' Took Inspiration From This Gavin & Stacey Location
By Maxine Harrison
John Mulaney & Olivia Munn's Relationship Timeline Features The Comedian's First Father's Day
By Jordyn Tilchen
ITV’s Six Four Is Based On A Best-Selling Japanese Mystery Novel
By Sophie McEvoy
Get Even More From Bustle — Sign Up For The Newsletter