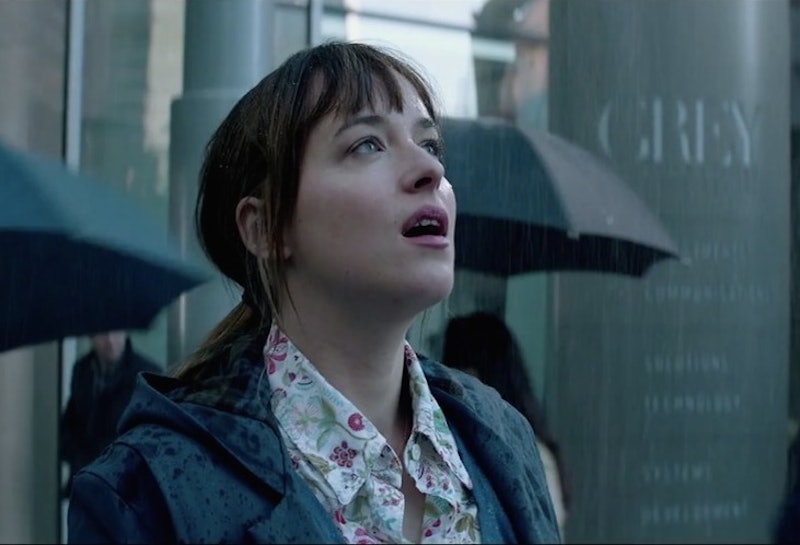 It looks like Fifty Shades of Grey is going out of its way to disappoint as many of its fans as possible with the film adaptation. The movie hasn't even come out yet, and all the news about it seems geared toward making people cry. First, there was the announcement that Jamie Dornan's penis would not be in the movie — thus making you have a better shot at seeing full frontal in mystery thriller Gone Girl than in hypersexual romance Fifty Shades of Grey. Then, it was announced that Fifty Shades was receiving an R rating, as opposed to a more appropriate NC-17 or X or FOR THE LOVE OF GOD DON'T TAKE YOUR KIDS rating. Now we're receiving the utterly distressing news that Fifty Shades of Grey won't feature the tampon scene in the film. Sad times.

Right, but the scene. You can read excerpts of the moment basically anywhere online and find quite a few dramatic readings of the scene on YouTube, but long story short is that [WEIRD SPOILER ALERT] the ever-insatiable Christian Grey asks our innocent heroine Anastasia Steele when she started her period and, when she responds that it was only yesterday, he bends her over the sink, pulls out her tampon, and proceeds to have her right there in the bathroom. "Have her," I mean. Which is great in the sense that it punches any taboos about period sex in the face, but not so great because the poor girl was just trying to go take a shower and, like, what about boundaries?

Don't get me wrong. I'm actually really happy I don't have to watch this play out on screen because I didn't even want to watch it play out in the book. I'm still shuddering just thinking about it, and I can't tell you how fast any relationship of mine would be over if some guy pulled that on me. (Pun intended.) However, it is disappointing, since that infamous scene was one of the many reasons that even people who hated the novel were eager to see the movie. I mean, Fifty Shades of Grey is over the top in either the best or the worst way, but it seems like the film wants us to take it slightly more seriously than the book. Which is great. Hard, but great.

All judgment of the film adaptation should be saved until it actually comes out in February, but this is just more bad news for all of us. At the very least, we can take comfort in the fact that the filmmakers are doing their absolute best to produce an adaptation we could all be pleased with and not entirely ashamed to have watched. That's more than you can ask for when it comes to these kinds of movies. (I'm still feeling the shame of having seen The Last Airbender...)

More like this
Cameron Diaz Just Recreated *That* Iconic 'There’s Something About Mary' Scene
By Rachel Mantock
Amanda Seyfried Reflects On 'Mean Girls' & "Gross" Remarks That Men Made After It
By Jake Viswanath
'Dirty Dancing's Jennifer Grey On The Tearful Moment That Changed Her Relationship With Patrick Swayze
By Sam Ramsden
Sandra Bullock, Girlboss Extraordinaire
By Matt Harkins & Viviana Olen
Get Even More From Bustle — Sign Up For The Newsletter