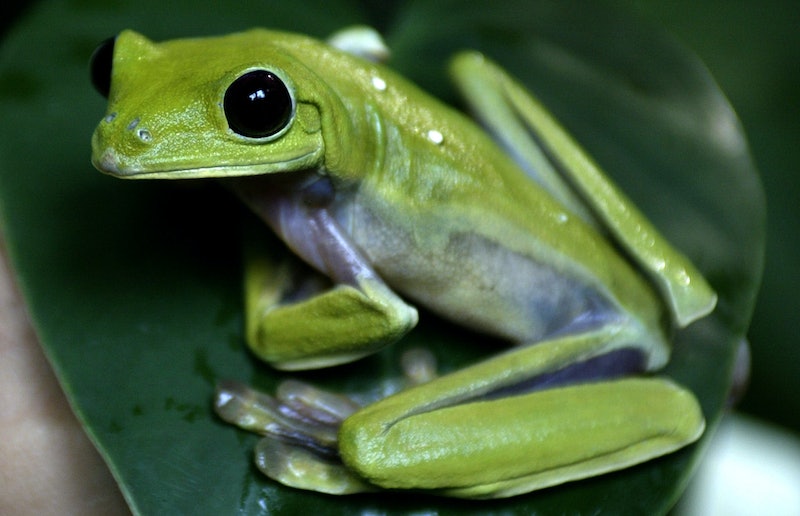 Feel like you've had some bad luck lately? Maybe you're stuck in a rut, or you lost out on a job, or have gone through a nasty break-up—whatever it is you're going through, this right here is the moment you turn it around. Because if this frog can escape from a snake's mouth after mostly being eaten alive, then you, my friend, can do anything. We can all do anything because this really, truly happened! By saving his little amphibian skin in what appeared to certainly be the final second of his life, this frog just proved to us that there is no such thing as rock bottom, and that we are all so much more capable than we might have believed. That's a lot to expect from a video, I know.

I have to say this is altogether more dramatic and inspiring than the time that guy intentionally got eaten alive by an anaconda, only to call it off in a hot second (which did not stop the producers from making us all watch for two freaking hours of our lives that we will never get back). This time around there is real danger and real heroism. Even after the daring froggy escape is made, we find out that snakes are even more agile than you imagined them in your nightmares; the frog barely escapes his clutches even after his initial, successful break for freedom.

If I saw a snake ingesting a live frog easily three times its width, I probably wouldn't have had the guts to get close enough to film them (in fact, there'd probably be video of me screaming and running away instead). So props where props are due: The people filming this were as fearless as the frog who is now out in the wild, croaking to his little froggy heart's content. Go, Kermit, go.