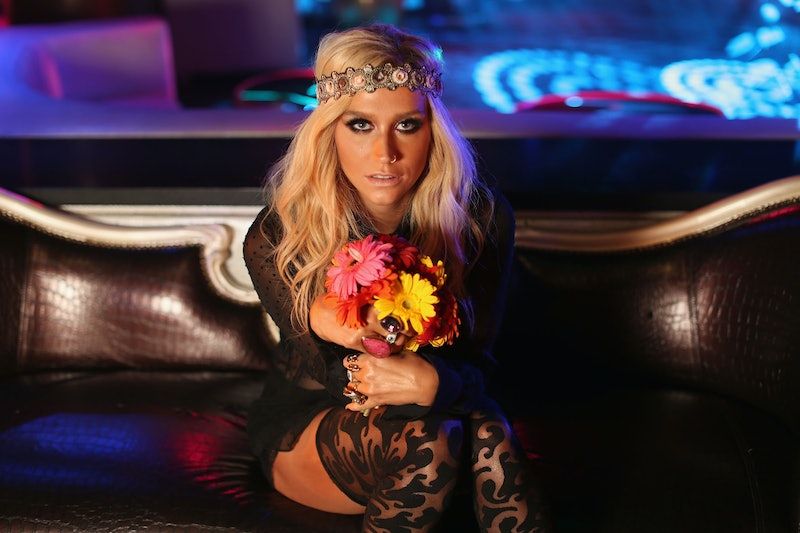 Wake up from your mid-afternoon hang-over, Kesha fans, we have a big development about our favorite garbage-chic pop star. Apparently this weekend, Kesha accidentally stole a 3-foot-tall T-Rex from Los Angeles' Natural History Museum. It was a misunderstanding, mind you: The auto-tuned angel thought her assistant already paid for the dinosaur. She returned it without consequence, of course, but it was in a curiously haphazard state: According to reports, the T.rex was bathed in glitter.

There are so many unanswered questions from this development. Why a T.rex? Do they party harder than brontosauruses, triceratops, or pterodactyls? We may never have that answer — but what I can guarantee is that this probably isn't the first time Kesha has drenched an item in glitter.

Think about it. The girl is living life as a rambunctious party girl — a veritable pop fairy princess at a rager, if you will — so that almost guarantees that Kesha gets glitter all over the place whenever she shakes out her tousled mane. That's part of what makes her so glorious! But after a certain point, everyday tasks are probably made difficult with her abundance of effulgence. That said, here are some of the most common items (plus occasional landscapes and people) human glitter bomb Kesha would probably contaminate with glitter on the regular:

As everyone and their mother knows, whiskey is glitter's only true rival for Kesha's affections.

For that glimmer baby pink glow.

The better to tame pastel hair with, my dear.

4. The Toothbrush She Packs for Her All-Nighters

Always be prepared, kids; dental hygiene isn't something to half-ass. Kesha personally looks to brush her teeth with the aforementioned bottle of jack, and between that and her glitter, her choppers must sparkle with a heavenly magenta glow every time she smiles. Bless.

Imagine the chaos when you take Kesha to your high school football game or — God forbid — Disney World.

If you took Kesha to the Sahara, she would instantaneously replace all the sand with electric blue glitter.

Not just the ones she wakes up in, either. When Kesha does her monthly shower, there's no doubt in my mind that she clogs the drain with excessive amounts of shimmer dust.

Double the sparkle, double the fun.

You know, the ones that are half-off her shoulder at all times.

11. Fur Vests and Coats That Look Like Skinned Muppets

Honestly, at this point we've just listed half the stock at Urban Outfitters.

When she grinds up against your typical mythical beast, she probably covers them with glitter, and it's probably a magical experience, like getting sprinkled with Tinkerbell's dandruff.

13. The Dollar Sign That Used to Be in Her Name

Sources haven't confirmed this, but I wouldn't doubt if the Artist-Formerly-Known-as-Ke$ha broke up with her dollar sign after too many hard-partying, glitter-soaked nights.

I don't know if Pitbull counts as an item, per se, but they were probably separated for most of the "Timber" music video because Pitbull was getting doused in Kesha's glittery glow.