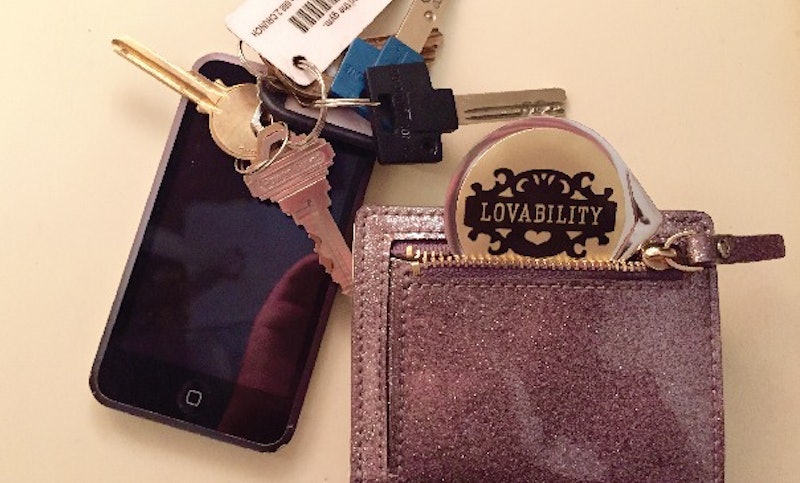 According to the National Survey of Sexual Health and Behavior, straight men consistently use condoms more than straight women when it comes to vaginal intercourse, no matter what age group we're talking about — but why should that be the case? There's no reason it has to be — and this video from New York–based condom start-up Lovability offers a compelling argument for women carrying condoms as a habit, too. It's worth noting that the video is kind of an advertisement; Lovability is currently running an IndieGoGo campaign to get its product off the ground. But even taking that into account, it's still worth watching, so here — check it out.

Lovability's goal is to provide the world with female-friendly condoms. They're not, however, actual female condoms; they're male condoms, just packaged in a way that's more discreet and therefore more comfortable to carry around. Personally, I don't think anyone should feel embarrassed about the fact that they've got condoms in their pocket, but I can understand why they might — and these provide a neat little solution for the problem: You can still carry them, but it won't necessarily be obvious that you're carrying them. According to the company's IndieGoGo page, the condoms themselves are vegan, sustainably produced, and sourced from a Malaysian Fair Trade rubber plantation; they're also 100 percent natural latex and free of weird chemicals and additives. Not too shabby, right?

Anywho, Lovability recently decided to conduct a small social experiment in New York: Grabbing some of its condoms, it rounded up a camera crew, took a walk around Union Square and introduced passersby to its product — and, perhaps more importantly, asked women whether they carry condoms (and if not, why) and what men think about the idea of women carrying them. You can scroll down to watch the whole video, but here's the general gist of it:

Reasons women cite for not buying or carrying condoms themselves:

What men said when asked what they think about women carrying condoms:

Food for thought, no? Yes, this is a tiny sample size — but hopefully it's demonstrative of a bigger trend. And if that's what people really think, then we've got no reason to be embarrassed, right?

Of course, there's also this: Pretty much every form of contraception besides condoms, women are expected to provide. It's why a lot of women feel like it's not too much to ask for men to supply the condoms if we supply the hormonal birth control; it's also why Vasalgel, the non-condom form of male birth control that's slated to drop in 2017, is such a big deal. But I can't help but think the fact that this divide — the, "well, why should I be the one who has to worry about birth control?" one — exists at all is problematic, and that if we tear it down completely, we'll all be much better off. Contraception isn't something that only men or only women should have to deal with, and women carrying condoms doesn't mean men no longer have to (and let's not forget that condoms are the only form of contraceptive that's effective against STDs). If everyone carries them, we're all taking charge of our sexuality and being responsible about the sex we're having. And that? Can only be a good thing.

Watch the full video below, and head on over to Lovability's IndieGoGo page to kick in a few bucks if you feel like it: