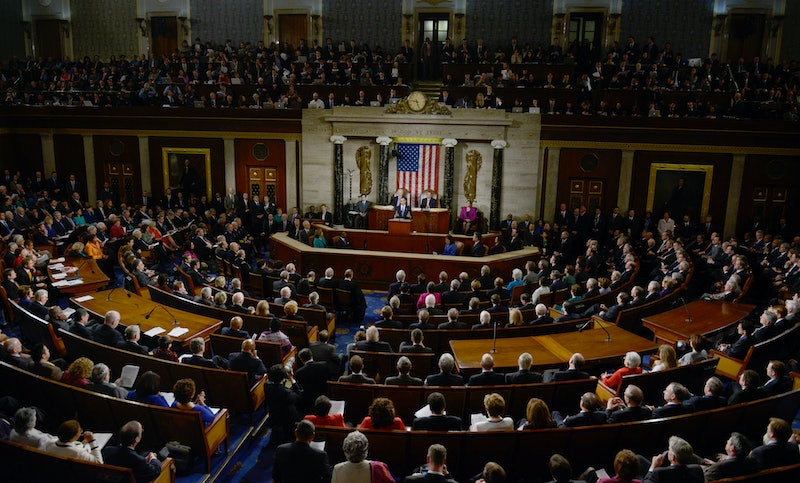 Long before Obama took office in his very first term, the State of the Union has seen steadily declining viewership. Wednesday night's State of the Union address was anchored by plenty of viral moments that might have made for good viewership — Obama looked orange and U.S. Energy Secretary Ernest Moriz had the best wavy pageboy haircut of all time. Among the more inconsequential aspects of the annual speech, flecks of legitimate hope began to form into something far more meaningful. Were these pivotal components — including the off-the-cuff remark "I have no more campaigns to run. I know, because I won both of them." — enough to save overall SOTU viewership from its fast decline?

A look at reports from major cable networks like frontrunners Fox News and CNN show that this trend of dwindling viewership is now an established pattern, with only 8 million Americans tuning in between the two, plus MSNBC. Obama's first-ever State of the Union in 2009 saw 52.3 million people tune in to hear our nation's great orator speak. Numbers held steady until 2012, when viewership hit less than 40 million. Those figures have only dwindled since Obama began his second term. ABC, CBS, Fox, and NBC, the four major networks typically associated with such broadcasts, also saw a cumulative decline of 7 percent from the year before, putting their total number of viewers at around 20 million people.

Many lay the blame of this decline on a dwindling national attention span and the advent of social media, whose numbers were actually up in terms of SOTU chatter by 11 percent. Numbers have yet to be released of overall viewership online, though 1.4 million people tuned in via whitehouse.gov last year. The archaic pageantry of the speech that includes everything from speech-lengthening applause to an official rebuttal, gets increasingly juxtaposed against a digital backdrop, to the point that the SOTU might not even be needed in our age of connectivity.

Obama's social media savviness has seen the announcements of a proposed free community college plan posted to both Facebook and Vine. The president even went so far as to release the full text of his speech before his SOTU address. Though the move certainly makes it easier to follow along in real-time, it might point more to the State of the Union's obsolescence than an innovative move to engage Americans.

The Washington Post notes that, no matter the subject matter or the length of the speech — though this was the second shortest SOTU of Obama's presidency — it has little effect on overall public opinion of the president. Not that it matters to him anyway. After all, he's got no campaigns left to run. He's already won them both.