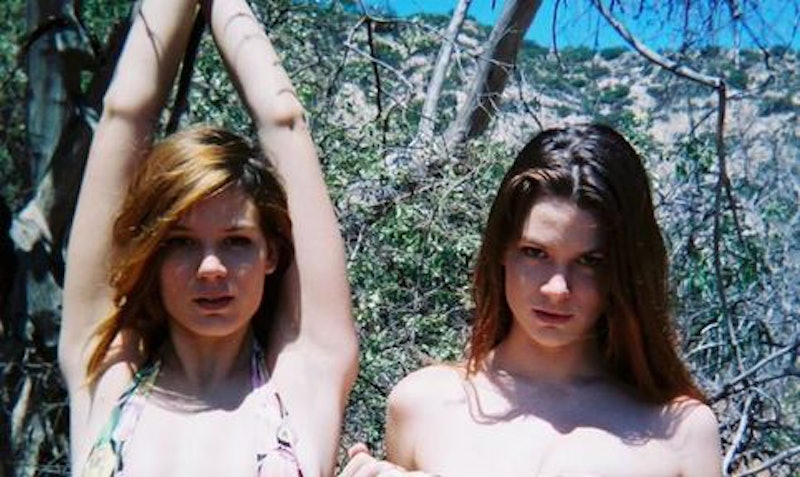 Another day, another case of social media censoring some people, but not others for the same infraction: Australian online magazine Sticks and Stones has had their Instagram account deleted because they dared to post an image of women modeling bikinis with — gasp! — their pubic hair peeking out from the sides of the swimsuit bottoms. Oh, our poor eyes! However will we be able to deal with the revelation that women have hair? It's simply unthinkable!...

...Or at least, that's what seems to be going on behind the scenes at Instagram. To rehash, Instagram's policy states, "Don't share photos or videos that show nudity or mature content"; while it's debatable whether the Sticks and Stones image even falls under either of those umbrellas, someone at Instagram decided they do, and banned the whole Sticks and Stones account. It's not the first case of censorship we've seen, and, sadly, it probably won't be the last — and the story is the same as it always is: The "rule" that inspired the deletion of the account is being applied to one set of people, but not to others. That's where the problem lies, and as always, it's bullshit.

For the curious, here's the image; it's available via Sticks and Stones director Ainsley Hutchence's Twitter account, because apparently Twitter doesn't have the same beef with weird beauty standards that a lot of other forms of social media do:

As Ashlee Wells Jackson noted when discussing the #StopCensoringMotherhood movement, the issue isn't that Instagram and other forms of social media have rules to govern the kind of content allowed on their platform; it's that they're applied in a way that looks rather discriminatory. “If they want their rule to be no nudity whatsoever, any nudity will get you banned, great," said Jackson. "It’s their platform. They can make that rule, but then they need to consistently uphold that rule.” Hitherto, the images that have been allowed to stay up have mostly depict conventionally attractive people, while those which have been taken down have mostly depicted people who don't fit into that narrow vision of perceived beauty. It's why an account that's literally called A Bikini a Day not only exists, but is thriving:

And it's why Miley Cyrus' full frontal shot is still up.

While people like Meghan Tonjes and the #StopCensoringMotherhood team keep seeing their images blocked and their accounts deleted. Tonjes, a plus-size blogger and singer, had the image below deleted and then reinstated after Instagram was forced to apologize:

And the Ashlee Wells Jackson of #StopCensoringMotherhood has lost track of the number of times her accounts have been banned because of unaltered versions of images like these:

In the case of Sticks and Stones, I find it both interesting and troubling that the models are... well, models — but even that wasn't enough to protect them in the face of untrimmed pubic hair and a mild nipslip (which, by the way, I would argue isn't nearly as visible as Miley's are through that foam). It's even more troubling when you hold it up against the fact that Justin Bieber's Calvin Klein ads complete with (possibly Photoshopped) pubic hair haven't been removed:

It's a story similar to photographer Petra Collins'. Collins had her Instagram account deleted in 2013, also due to an untrimmed bikini line. As is the case with Hutchence, the image is available on Collins' Twitter account:

What's so bad about that? I have no idea. At all. It's just hair.

In both the cases of Collins and Sticks and Stones, we have sexism rather than size-shaming; the end result, though, is the same. Said Hutchence to Mic, "Unfortunately Instagram has ruled out natural hair that appears on all bodies of women that don't trim their bikini lines. This hair occasionally does spill out of the sides of somewhere as it does on men in their underwear. But Instagram seems to be OK with man pubes. Clearly this is absolutely sexist. Instagram believes women should wax or get off their platform."

The point stands now as much as it always has: It is absolutely unacceptable to hold some people to a set of rules, but not others. If you're going to make those rules, you have to follow them as closely as possible in all cases — none of this, "Well, you're famous/you're pretty/you're otherwise desirable, so yours get to stay, but yours don't." But in an ideal world? We'd stop making the human body taboo. Come on, people. We all have them, and they're not inherently sexual. There's nothing mystifying or bad or shameful about them. Bodies are awesome. Let's celebrate them instead of censoring them.