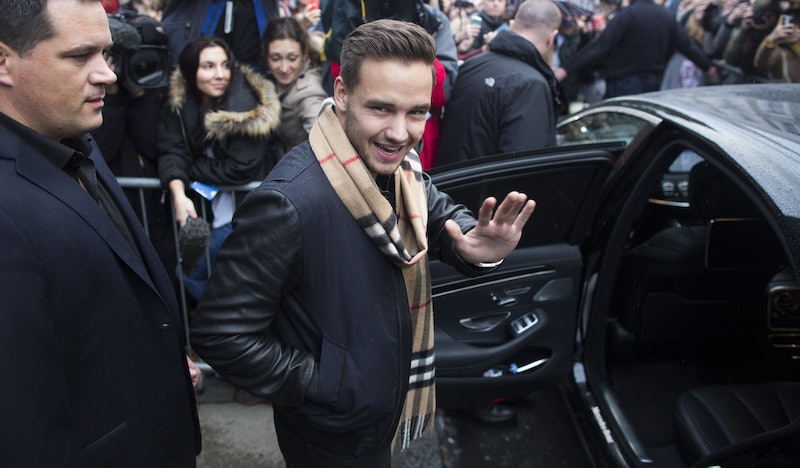 Ah, One Direction. Considering their mind-blowing popularity among, and influence over, people both young and old, it's always nice when a member of the band uses their fame to do some good for the world. Celebrity activists are not exactly in short supply, especially these days when Taylor Swift is paying off a fan's student loans and Jessica Chastain is leading a rally for diversity in Hollywood, but there is no such thing as too many celebrity activists. Late Wednesday night, One Direction member Liam Payne asked his fans to change the world — and, well, it was incredibly awkwardly done. I mean, it reads like one of those posts you write at 2 a.m. that sound very profound before the sun rises and you wonder what kind of high you were on. But the sentiment behind it was incredibly nice.

"I don't ever claim to be a good person. I'm not," wrote Payne in a TwitLonger. "But I feel that I wanna be a humanitarian with all of this attention. If that's all I do, that would make me happy. The world needs to change. Band together right now, the same way me and One Direction have the past few years."

Since we are talking about the fandom that got "Hi Zayn" trending on Twitter when notoriously private 1D member Zayn Malik dusted off his Twitter to say hello, it comes as no surprise that #LetsHelpLiamChangeTheWorld has been trending on the site all Thursday morning. The truly inspirational thing is that Directioners genuinely seem to have taken Payne's words to heart, and are using the hashtag to try and think of ways that they can give back to their community, to their society, and to each other. I mean, I'm still stuck on the part where Payne wrote, "I've been there to Ghana. They don't have anything. They can't buy food from the groceries or McDonald's."

Um. Okay. I understand that Payne was trying to make the socioeconomic situation of third world countries as relatable to his young followers as possible, but he could have been a little more tactful than stating that he's been to Ghana and they don't have McDonald's. Still, his words had the desired effect on his now-energized fans.

Whether or not this cry for change will last beyond praising Payne for launching it still remains to be seen, but for now it's nice to see a young celebrity making a point of using that celebrity for good. Whether you like One Direction or hate One Direction, whether you love their music or hate their music, you can't deny that this was a solid effort to do some good in the world. Now if we could get a little less fans praising Payne for his thoughtfulness and a little more fans taking his words to heart and finding a charity to support, this would be a perfect morning. After all, whatever your reasons for giving to charity are, there are millions of them that could use funding and attention.

More like this
Harry Styles Helped A Fan Come Out As Gay In Dramatic Fashion At His London Show
By Jake Viswanath
Rihanna Is America's Youngest Self-Made Woman Billionaire, According To 'Forbes'
By Hugh McIntyre
Britney Spears’ Honeymoon Plans Include Watching This Movie With Her Husband
By Grace Wehniainen
Adele Says It Would Be “Wonderful” To Have Kids With Boyfriend Rich Paul
By Jake Viswanath
Get Even More From Bustle — Sign Up For The Newsletter