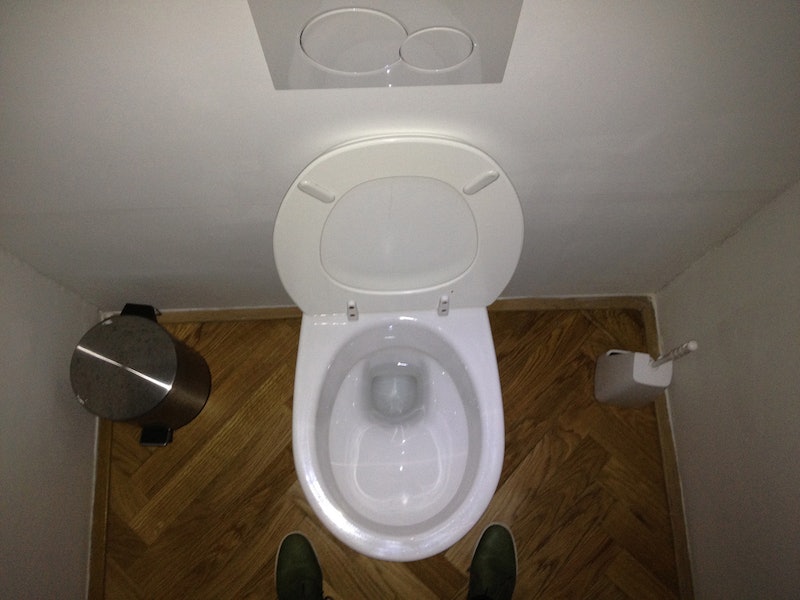 We've had everything from hamburgers to ghosts take on Tinder, so at this point, I don't even know why I'm surprised when some new and unusual novelty account pops up — but guess what? There's a toilet on Tinder now, too. I don't know about you, but I definitely didn't see that one coming.

Oliet the toilet is the creation of Alex Scola, an associate editor at Distractify. In his post about Oliet's adventures, he (Scola, not the toilet) noted, "I had never used Tinder before this experiment and, frankly, I'm not sure I ever will again. Tis a scary place"; it's an understandable reaction, but, well... we've all made sacrifices in the name of work, right? Anyhoo, Oliet is 25, and although he makes no bones about what he is, appears to be slightly bitter about his position in life: His profile reads simply, "I'm a toilet. I take shit all day and no one appreciates me." Poor guy.

But hey, at least he appears to have had better luck with Tinder than a lot of people do — in 24 hours, he had over 100 matches and a whooooooole lot of people to flirt with. Perhaps the most entertaining thing about it is that most of the people he chatted with took the lead, with the result being toilet humor at its finest. Literally.

You can see a selection of screenshots Scola took of the conversations other Tinder users carried out with Oliet, but for the curious, here are a few highlights (along with some GIFs of pets just not understanding how toilets work, because why the heck not?):

"Thanks for always being there when I need you, Oliet."

"Your secrets are always safe with me. Provided you remember to flush."

The Meaning of Life:

The Search for Intelligent Life in the Universe:

"So, what causes a toilet to go out and look for love?"

"Probably the same thing that causes people to go out and look for a toilet. Call it... a feeling in your gut."

By the end of the experiment, Oliet had over 200 matches; Scola noted that they were a pretty even mix of both men and women, and only eight of them were bots. Not bad, right?

Is anyone else curious to see if any of these wacky Tinder experiments have actually resulted in dates in real life — and if they have, how those dates went down? I mean, yeah, a profile that's essentially a fictional character doesn't directly tell you much about the person it actually belongs to...but I feel like it does give you a bit of an idea about the face behind the toilet (or pizza, or whatever). It's a specific kind of person that will put the effort not only into setting up the profile in the first place, but communicating in character, as well. Besides, it's a great hook, is it not?

Head on over to Distractify to check out the full story — it's quite an adventure (although it does get a little...uh...dirty at times).