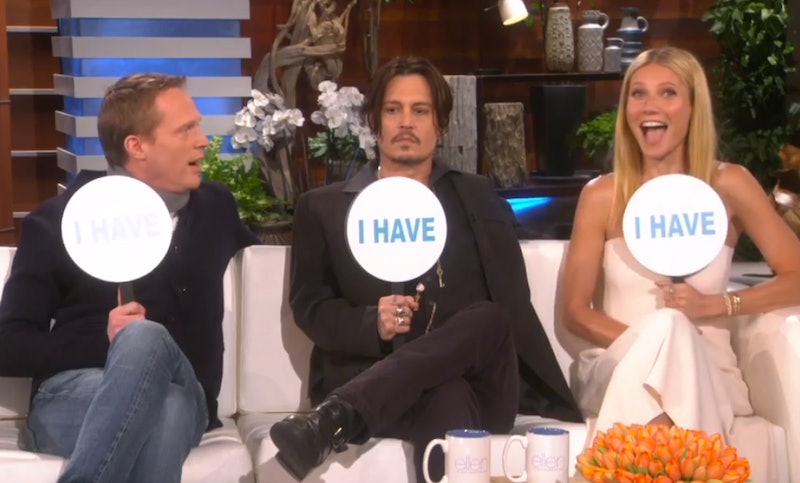 Look, we all know the rich and famous have access to among the wildest of the lifestyles. If us plebes can get a party going, you know the person with the private jet and the literal lifestyle blog can get a party going (with specially imported vodka, of course). So when Ellen DeGeneres played "Never Have I Ever" with Gwyneth Paltrow, Johnny Depp, and Paul Bettany, I was really craving some more salacious stories. Maybe if it had been on Watch What Happens Live? Or in hour three of the Golden Globes?

These three were on Ellen promoting a movie, and I will admit that they did give us some vague things to ponder. Both Depp and Bettany have been arrested, apparently. A light Google search turned up two arrests for Depp: in 1999 after "brawling" with paparazzi, and five years earlier in 1994 when he was brought in on "charges of criminal mischief" after trashing a hotel room that cost triple my rent per night. According to People, the latter came after a fight with then-girlfriend, supermodel Kate Moss. DeGeneres really should have made them elaborate and tell us some stories after each and every one of these questions.

Another question "revealed" that they've all joined the mile-high club (DeGeneres included), because I imagine it's much easier to get everyone into the right mood (and right positions) when you're in a studio-chartered private plane with glorious amenities and a spacious bathroom than it is when you're flying coach through Cleveland and you can barely fit your own entire body into the only private space available on the whole plane.

But we need more information! Did Paltrow commence sexting within her marriage or was this after the uncoupling? And how the hell have neither Depp nor Bettany engaged in sexting by now? Depp's engaged to a young person, and this is 2015! Without context, this Never Have I Ever Game is just kind of a snooze. Check it out below.