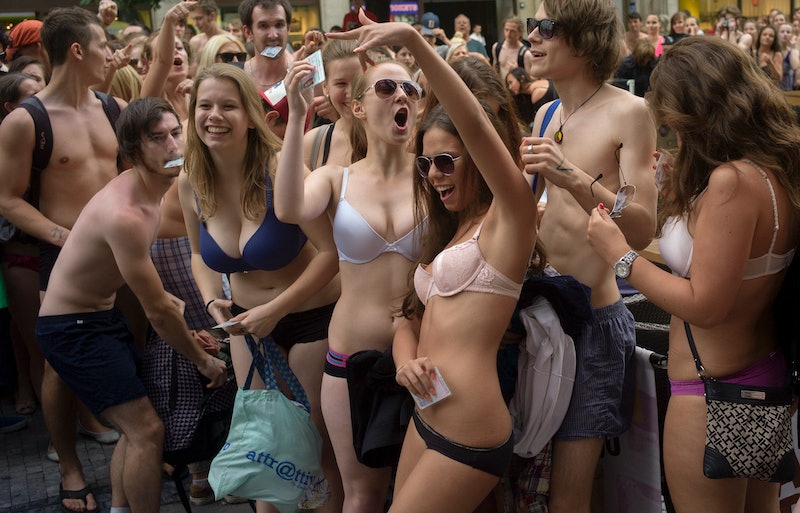 "I hate my body." These are the first words in a video called "Emotions of Weight" created by YouTube personality Kat Lazo. How many times have you stood in front of the mirror and said that to yourself? Women are put under so much pressure to constantly look like the images we see in the media, that it can be hard to appreciate the bodies we have, even if they are under construction. Having a positive body image is sadly rare these days, as 80 percent of women in the United States are dissatisfied with the way they look.

Vlogger Kat Lazo set out to change that though, as she took to the streets of her Queens neighborhood in the buff to work through her own body image issues. She says that she went on an "emotional rollercoaster" a couple of years ago after breaking up with her partner, which resulted in her losing 20 pounds in only a month. She was able to come out on the other side happier than ever though, as they got back together, but ended up gaining more weight than she had initially lost, making her the heaviest she's ever been. Since then, she's both learned to love her body, but also struggled, as she's had to endure negative comments from loved ones and found that people didn't seem to understand that she was happy at the weight she was.

Lazo is no stranger to making strong statements, as she has been making videos on various feminist and social issues on her YouTube channel for since 2012. Ultimately, her goal is to offer an alternative to the messed-up messages that the media gives young women about their bodies, as she told Mic that she wants to "challenge the media, question social norms and encourage young folks, particularly young women, to think critically about the world." She's clearly achieving her goal, as her video has received over 100,000 views.

Want to see what all of the buzz is about for yourself and get inspired to love your body? Check out the video below (NSFW!).

More like this
TikTok’s Viral “Rating Game” Is Exposing Everyone’s Icks
By Courtney Young
Olivia Munn Got Real About How Her Body Hasn’t “Snapped Back” Post-Pregnancy
By Stephanie Topacio Long
American Girl Doll Memes Are Going Viral On Instagram & Tiktok
By Emma Carey
How To Take A .5 Selfie On An iPhone
By Emma Carey
Get Even More From Bustle — Sign Up For The Newsletter