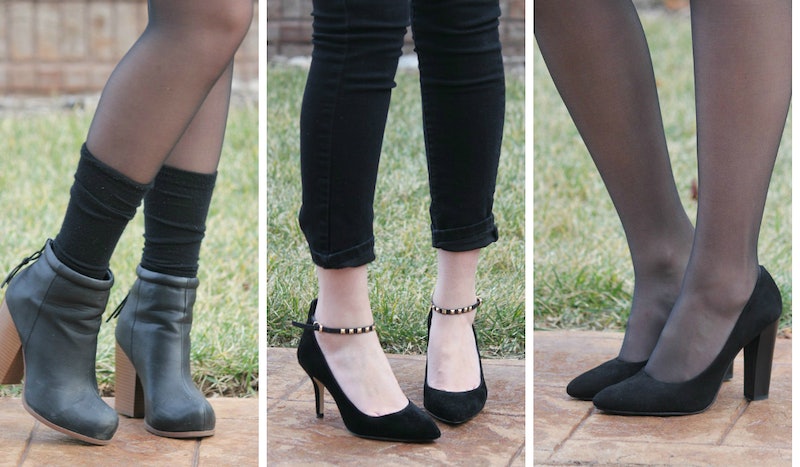 I am someone who absolutely adores heels but avoids wearing them in almost every situation. When I’m getting dressed to go out, I dread choosing footwear because I know that I own the perfect black and gold pumps with a Lucite heel and lined insole that would look amazing with my outfit, but also that I will just end up wearing flats or sneakers so I don’t suffer in pain all night. That being said, I admire fashion figures like Anna Wintour and Carine Roitfeld who prance around designer runways and fashion magazine offices in the highest and skinniest of stilettos with no struggle at all. While I understand that the people they surround themselves with pay a lot more attention to what they wear than those in my life (you know, because their careers are so intertwined with high fashion), I can still appreciate their courage and bravery in enduring pain for their sartorial choices.

At the same time, strong, independent women like Wintour and Roitfeld wouldn’t wear heels if they didn’t like them for one reason or another. Whether they enjoy the way the shoes themselves look or the way they themselves feel when wearing them, these women are obviously donning stilettos because they want to. If it was actually impossible to endure the pain, I bet (or at least, I hope) they wouldn’t do it. That being said, if I find heels so painful, how do they not? Does it go back to anatomy and the fact that everyone is different? Are their shoes designed differently? Did they have a special foot surgery to accommodate their footwear habits? I mean, just look at them:

No matter the why and how of the crazy heel wearing these women go through, I am convinced that if they can wear heels on a daily basis, then anyone can. Even me.

So, to prove that I’m not just talking the talk but also walking the walk, I took on my ultimate personal challenge when it comes to fashion: Wear three different heels of different heights for three days, and record what happens.

DISCLAIMER: Don’t try this at home unless you’re willing to endure some REAL pain.

On the Agenda: Organization meeting; dinner.

Going into this, I figured the kitten heel day would be the easiest, least brutal one. It’s easy to assume that because kitten heels have the shortest heel and are the least (traditionally) sexy, they’ll be the most comfortable. I. Was. Very. Wrong. These heels were absolutely terrible to wear. While I admittedly only wore them for four hours, every time I took a step or even wiggled my toes it felt like I had endured a year of pedi-pain. Kitten heels may sound cute, adorable, and harmless, but let me tell you: My experience was quite the opposite.

What originally drew me to purchase these kitten heels was their pointed toes, gold studded ankle band and overall comfortable-looking design. While it may have been my mistake to wear them with jeans — sans tights — they were a struggle to put on from the get go (even though they’re a size bigger than what I usually wear) and they squeezed my feet the entire evening. Though I didn’t have too much trouble walking around in them (I only stumbled once), it was a huge relief to take them off at the end of the day.

Verdict: Not as bad as the kittens, but still not completely comfortable.

While these shoes have a significantly higher heel than those of Day 1, they were surprisingly more comfortable. I expected my feet to feel pretty beat up after such a long day with a lot of walking involved, but I only felt major pain at the end of the day — which is common for me, and I’m guessing a lot of people who wear heels for extended periods of time.

I think the main difference on Day 2 was principally in the design of the shoe. While there are many ways to make walking in heels more comfortable, I’m convinced that the major difference was the thick heel on these shoes. When I walked, I barely teetered, and I didn’t even slow down when taking a corner! That might sound a little pathetic, but balance is a major concern for me, especially when in heels. That being said, the extra tall cover around the ankles was a little too tight and I felt it by the third hour wearing them. Thankfully, I was wearing tights this time, so I didn’t get a rash from the shoes rubbing up against my skin. But I can imagine that happening without the protection of the tights.

On the Agenda: Shopping.

When I first laid eyes on these shoes, I fell in love with them. They’re structurally very basic yet extremely aesthetically pleasing. The somewhat thicker heel was different from the pumps I usually come across, plus their basic color would work perfectly alongside my all-black wardrobe. I tried them on in the store, and became convinced they were comfortable, even though now I realize I probably only told myself that because of how beautiful I thought they were. Maybe that was a bad idea, because these shoes are, well, how do I say this, painful.

Despite how pretty they are, these heels are admittedly not the most comfortable shoes and I certainly wouldn’t recommend them for a long day. After three hours walking around downtown, I had to take them off. Thankfully, I predicted as much would happen, so I was able to change into a pair of flats I had in my handbag — but that didn’t help my feeling of defeat. When I was wearing the shoes, I was either complaining about how badly my feet hurt or how much I wanted to take them off, so I went the easy route. After I changed into my heavenly-comfortable flats, I spotted a previous blister acting up again. The skin on both my big toes and pinky toes were red and inflamed, almost like they were asking for new, juicy blisters. I feel bad for giving up on these pumps for the experiment’s sake; but I am pretty glad I avoided those blisters.

Ultimately, I don’t know if I’m cut out to be wearing heels on a day-to-day basis. It’s no joke trying to get around town without looking like a baby giraffe walking in heels, even if they seem comfortably harmless when you first buy them. From the three heels I wore for three total days, I’d have to say I was most comfortable wearing the booties. Even though they have a heel, it was thick and stable and had extra support in the design of the shoe. It wasn’t that they were as comfortable as my Converse sneakers (which may or may not be what I’m wearing right now) but they were bearable and cute, which is really all we’re searching for in heels, isn’t it?

Oh wait, I bet someone would disagree...

More like this
Iris Law's Skunk Mullet Is Not For The Faint-Hearted
By Tomi Otekunrin
Frankie Bridge Has Launched A Brand New Fashion Line With Tesco
By Rachel Mantock
Here's How To Practice Self-Love In Small Ways Every Day
By Mackenzie Sylvester
How To Wear Water Waves, According To Meghan Markle’s Hairstylist
By Tomi Otekunrin
Get Even More From Bustle — Sign Up For The Newsletter