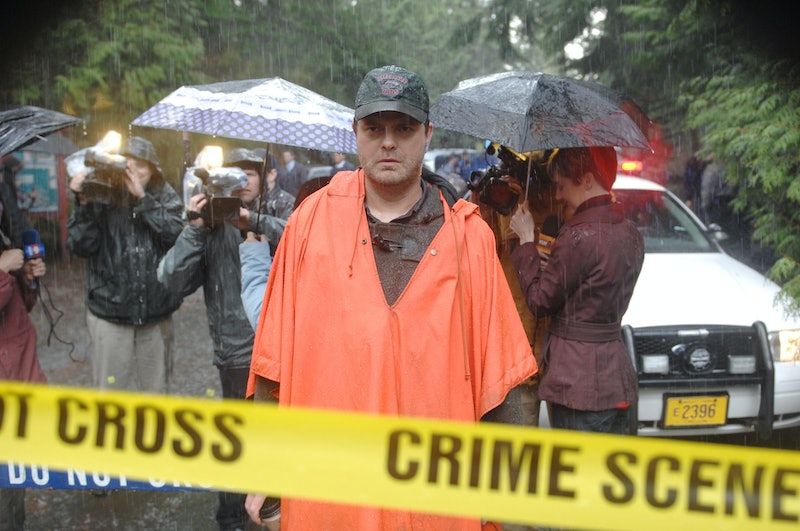 When I first heard that Rainn Wilson would be returning to TV in his own show, the diehard Office fan inside of me freaked out. That was until I saw the trailer for Backstrom, where Wilson plays Everett Backstrom, a racist, sexist, stubborn, unbelievably offensive detective. I was worried, of course, that the show would focus on Backstrom's hard-headedness and mistreatment of women, and while it does slightly do that, Backstrom , itself, is not a sexist show.

That doesn't mean Wilson's character, by the same name, isn't a sexist character. He is. Totally. But throughout the episode, you get that the writers of the show are using Backstrom's polarizing comments to offset what is actually happening around him. Yes, Backstrom accuses his partner of sleeping with all her Johns when she was an undercover call girl just moments into the show, but that doesn't really represent what the show is offering.

Instead, the "horny little minx" that Backstrom patronizes, Detective Nicole Gravely, played by Genevieve Angelson, is probably one of the most competent detectives on staff within the Special Crimes Unit. She's the straight man on the show, often setting Wilson's character up to deliver a sarcastic punchline, but she's also kicks ass. Not only is Nicole a lead detective on the team, but she often calls Backstrom out for his BS ways and behaviors. Plus, when Backstrom was (possibly) going to get assaulted by a suspect, she broke the suspect's finger in the blink of an eye, all while Backstrom stood there.

Another powerful, intelligent character on the show — disproving Backstrom's opinions of women — is Nadia, played by Beatrice Rosen, the genius tech analyst at the S.C.U. When it started to look like Nadia was falling into the love-interest category for Backstrom too quickly, I became worried. But she proved me, and Backstrom, wrong, by fulfilling his need for a friend, and slapping him hard across the face to sober him up.

There is also the police chief, who doesn't love the idea of having Backstrom back on the force, played by Inga Cadranel. Having a woman in a higher power position might piss off Backstrom, but it's an awesome portrayal of women in power. Even the representation of the episode's stripper suspect — major eye roll at the stripper jokes Backstrom provided — turned out to be going to school for social work.

So yes, there is definitely some sexism on Backstrom, but it isn't the show that is putting it out there, but the character Backstrom. The show itself portrays women in a positive light, even though it might kill Mr. Backstrom himself.