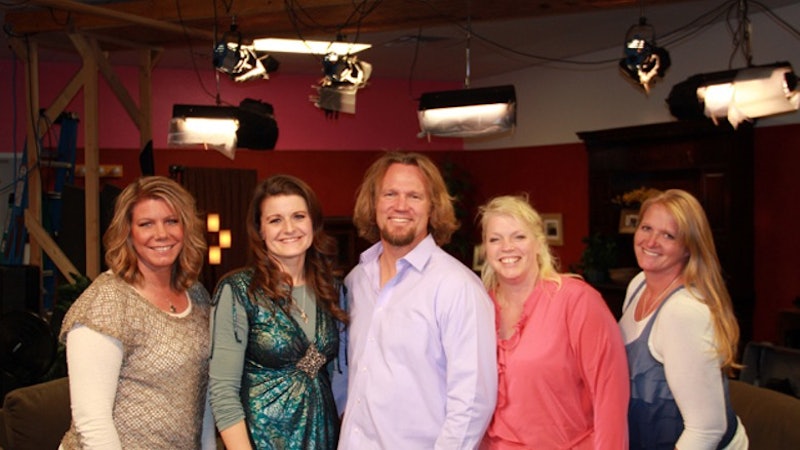 Although the relationships between Kody Brown and his four wives on TLC's Sister Wives are generally pretty happy, lately we've been seeing more friction in the family than usual. Between Christine's major blowout with Kody on last week's episode concerning a friend who disagreed with their lifestyle, Janelle's obvious dissatisfaction with the way she's been treated, and Meri yearning to break free and do her own thing, the Brown family is on some seriously rocky ground right now. And although they've made vows to spend the rest of their lives together — and pounded those vows into our heads over and over again during their recent commitment ceremony — is it possible that their marriages could one day collapse? And if they did, what would happen if the Sister Wives got divorced?

Even though to the Browns, divorce would be a worst case scenario option, Kody has said in the past that he wouldn't try to stop any of his wives from leaving him should they decide that's what they want to do. In a 2013 interview, he explained it like this:

We chose to be married. Nobody forced us to do this, and we choose to stay in it out of love and commitment. Just like any marriage. I hate to say it, because I don't like divorce -- nobody likes that -- but my wives are free to leave, if they make that choice.

And although Robyn is the only wife who has a divorce under her belt, Kody's wives have considered the possibility in the past. In the family's book, Becoming Sister Wives, Janelle revealed that she left the family for two years after suffering from some particularly nasty postpartum depression but ultimately decided that she wanted to return when Kody offered her her own space when they moved into their giant compound in Utah.

Two years after I’d established myself in my own house, Kody told me that he was moving the family to Utah. "Okay,: I told him. "See you later." No way I was going to give up the peace and independence I had found. . . [In the new house] we were able to be together as a family in a normal and relaxed way. I had my own space, but my kids had their siblings and the other mothers in the same building.

If one of the wives decided to split now, though, it'd probably happen about the same way — mom and kids would establish their own home outside of the cul de sac as the wife in question regained her independence outside the family. It would be tons more complicated than a traditional divorce between a husband and one wife, but it could definitely be done if someone wanted out.

And unsurprisingly, a relationship counselor who has helped a similar family through this kind of situation told the Huffington Post that the pain and challenges of a polygamist divorce aren't really that different from the ones monogamous couples face.