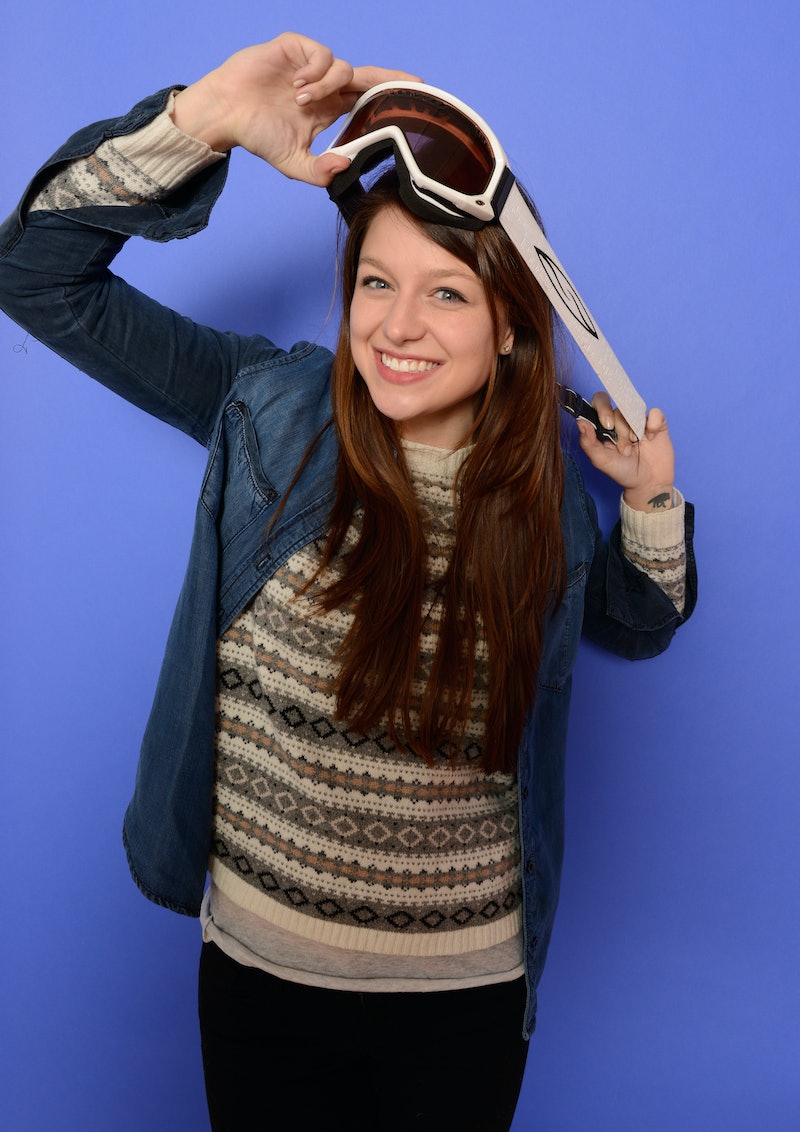 On Thursday, CBS did something that you didn't realize no other networks were doing until it happened. They announced that Melissa Benoist has been cast as Supergirl in their upcoming series of the same name, putting a female superhero in her own full-length TV series on a mainstream network. The closest we have to this on TV right now is Marvel's Agent Carter , an eight-episode mini-series examining the life of Captain America's designated love interest after the film and after her status as his love interest has long since expired, and Marvel's Agents of S.H.I.E.L.D., which, despite starting with an amazing count of three women on a six-man team, is led by Phil Coulson of The Avengers fame. The Wrap tracked down a picture of Benoist dyeing her hair blond, presumably (though unconfirmed to be) for the role, and her transformation only serves to highlight a transformation that Hollywood is still a little bit slow on the execution of. Is there any particular reason that Supergirl has to be white?

The Supergirl of DC Comics fame is a mantle that has been carried by many people over the years, most popularly by Kara Zor-El. As the biological cousin of Kal-El a.k.a. Clark Kent a.k.a. Superman, she was revealed to be another survivor of the Krypton disaster and the daughter of Zor-El (see, you know, her name). Don't get me wrong. Kara Zor-El is depicted in the comic books as a Caucasian girl with blond hair and baby blue eyes — but why must that hold true in the adaptation of her mythos? When casting Benoist, hair and eye color were not used as factors in the decision, since the Glee actress is a brunette with green-blue eyes. Why, then, does it seem that the only true criteria for the casting of Supergirl was "Must Be Caucasian?"

This trend of transformation works across all media. In the Harry Potter film adaptation, the only two important physical traits that the titular boy had to hold was having his father's messy black hair and his mother's green eyes. Daniel Radcliffe had neither when he was cast in the role (although the hair depended on which movie you were watching) — and, in fact, there's nothing in the books that would directly contradict the idea of Harry Potter being of African-American descent or mixed race. I couldn't imagine anyone but Radcliffe in the role now, but, if you take away all of the traits that make an iconic character iconic and leave the actor portraying them with nothing but the skin color in common, why is there some sort of invisible rule against changing that, too?

Imagine, for a moment, an actress of color being cast in the role of Supergirl. Imagine that she is a biracial actress, who has blue eyes and is all too willing to dye her hair blond for the role. Would there still be outrage and complaints? Historically, the answer there is probably yes. After all, we all remember the racist outcry that followed Amandla Stenberg's casting as Rue in The Hunger Games — despite the fact that Rue is specifically noted to be African-American in the book series. If the public can complain that a canon character of color is still of color in the movies, then it seems like a depressing fact that they would have complained had Supergirl had been rendered a character of color for the CBS series, even if everything else about the character remained the same.

The casting of Benoist in the role is an amazing decision on CBS' part as she was one of the breakout stars of Glee's Season 4 and seems like a refreshingly wonderful person and actress besides. However, when news like this is announced, and especially in the wake of the all-white Oscars' nominations controversy, it's important to reflect on those series and adaptations that could have diversified — and didn't. It's a safe bet that the Supergirl cast will eventually be fleshed out with more fantastic actors and actresses, among them people of color to fill supporting roles in Kara Zor-El's life, but, going forward into 2015, I would like to see less supporting roles being saved for people of color and more main roles being given to them instead.

MTV's latest offering, an adaptation of R. L. Stine's Eye Candy, took the blond-haired main character of the novel and cast Latina actress Victoria Justice in the role for the TV series. The CW's The Flash made a big move by cashing Iris West, the love interest of the titular hero, an African-American woman for their TV adaptation of the comic series. Marvel's Agents of S.H.I.E.L.D. changed the race of Daisy Johnson, The Vampire Diaries made Bonnie Bennett into an African American woman, and so on and so forth. The opportunity to diversify is always there, no matter what you see on the page of the work you are adapting.

Supergirl is a fantastic victory for feminism, and I need to see it do well in order to dispel the myth that people refuse to watch superhero works that are starring women. There is unfair pressure on Benoist and Supergirl to defy the low expectations of female-led superhero works, to defy the idea that even the worst male superhero work is better than the best female superhero work. (As evidenced by the fact that you can find a hell of a lot more of the former being made and produced than the latter.) However, it lost out on the chance to be a victory for diversity as well, a victory that was desperately needed in the current atmosphere of conversations about race and society.