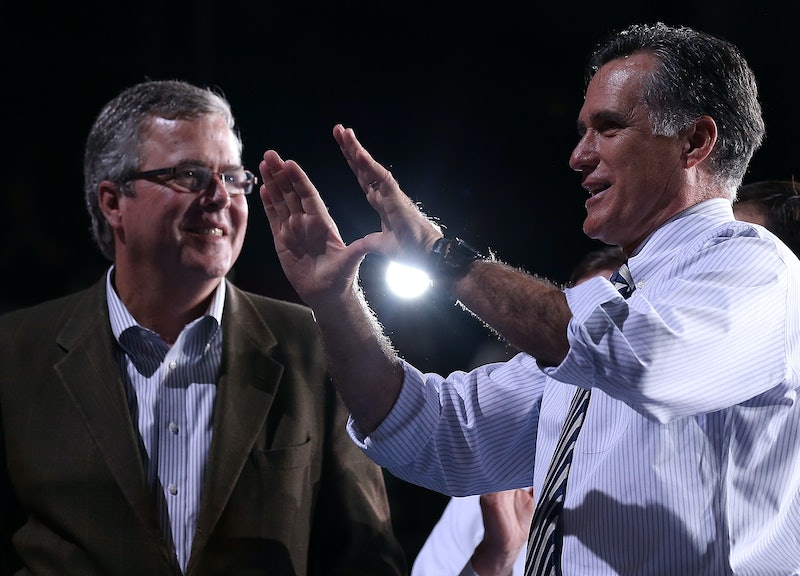 In Salt Lake City on Thursday, Mitt Romney and Jeb Bush met for a sit-down. No, the two didn't strike a deal for a joint ticket, but they did have some serious business to discuss. In the 2016 Republican presidential field, the pair are labeled the establishment candidates, and the possibility of Romney entering the race has Republican donors in limbo over who to support.

The meeting came about with some awkward timing — the sit-down was scheduled prior to Romney's musings of a 2016 campaign, and it was originally intended by Bush as a show of respect to the 2012 GOP nominee. The meeting agenda is believed to have changed to putting together an agreement on how to avoid splitting the Republican establishment vote, which could result in a non-establishment candidate securing the nomination — someone like Rand Paul.

But these wannabe presidents are playing coy about their intentions. Kristy Campbell, Bush's spokesperson, said in a statement that it was just a time for the two men to "catch up and visit" and that "Governor Bush enjoyed visiting with Governor Romney.”

Pleasantries aside, the two men certainly had a lot to talk about. Many Republican bundlers are no longer making financial commitments with a high probability both will run. Indecisiveness has caused a host of problems in past Republican primaries, with few candidates able to garner significant financial backing .

As Bush was traveling out of Ronald Reagan National Airport in Washington D.C., his trip attracted a slew of reporters. Julianna Goldman, a CBS correspondent tweeted about her interactions with the former governor.

Bush later posted a photo with Delta employees before boarding the flight to Salt Lake City, apologizing for all the attention.

Former Utah Gov. Mike Leavitt, and a friend of Romney, told The New York Times that he is “very confident it was a gentlemanly conversation." And it likely was — especially considering a March 2013 appearance by Bush on MSNBC's Morning Joe, during which he lamented about the loss of Romney:

It just, it breaks my heart he’s not there. He didn’t run — his campaign wasn’t the best, but he would have been a really fine president.

He might have preferred Romney to President Obama and delivered a poetic response about his colleague's loss — but now, as Bush prepares his 2016 team, he will be assessing the failings of Romney's presidential campaign. Bush already faces the challenge of his last name, while Romney has twice failed to become president — he's certainly not letting being “loser for life” get him down. The two political heavyweights will not want finances inhibiting their presidential ambitions, and this meeting might be a sign of a civil and respectful campaign between the two.