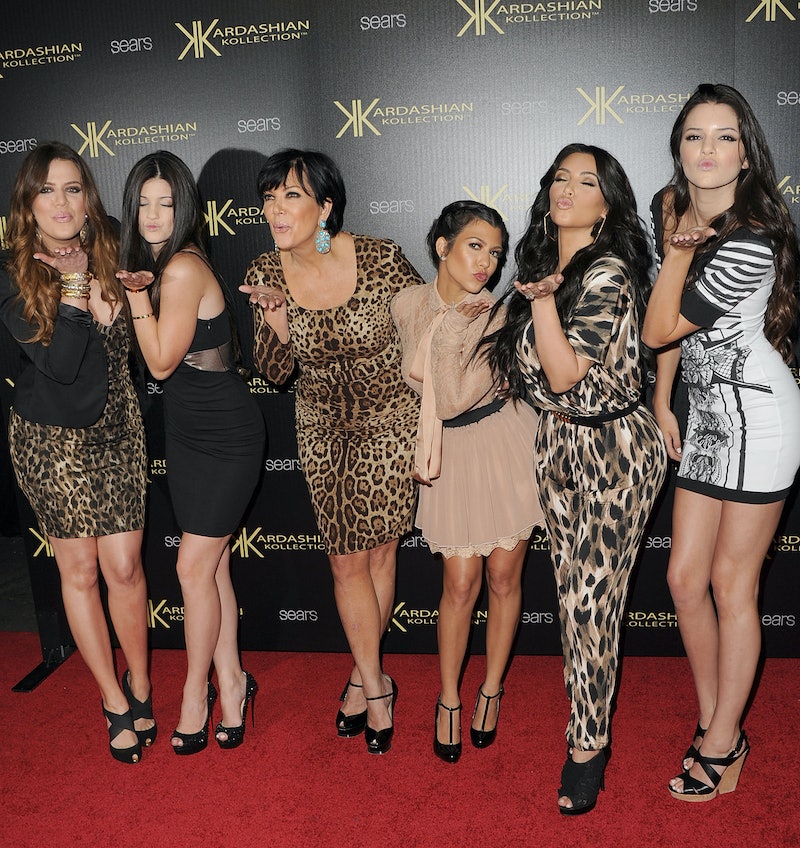 The Kardashians aren't exactly considered the poster family for being cool with your body. From Kim's self-imposed curve shaming, to the constant bullying of Rob for his supposed weight problems, this famous family has made headlines repeatedly for being less than stellar about the politics of size. Sure, these instances of categorical wack-ness have stuck with us, but we've also seen the Kardashians have body-positive moments here and there. As difficult as it is to admit, even the most annoying people have redeeming episodes of not being so annoying.

Ok, I know. The Kardashians are horrible on many levels. They may be everything wrong with the world today. They're symbolic of an extremely superficial and fame-obsessed culture. Kim Kardashian: Hollywood has robbed my life of countless precious hours that I can never reclaim. However, some of the moments that the Kardashian/Jenner clan have been heralded for being exhibitionists have been kind of under-handedly body positive. What?! Sometimes, they've even said some kind of right-on things about body image (GASP!). Feel free to roll your eyes at the seeming absurdity of this idea, but I'm just talking truth.

Looking back at some of the unexpectedly body positive moments of the rest of the Kardashian/Jenner family, maybe there's hope for them yet.

While trolls and tabloids were harshly critical of Khloe's body before her 30-pound weight loss in '09, she continued to be a subject of criticism afterwards. Four years later, she spoke to Cosmopolitan UK about the backlash, saying "I was feeling so good about myself and I was still so critiqued. I thought, ‘Oh, my gosh, if I’m not good enough now…'" Ultimately, it all taught her to disregard what the critics say. All that matters is feeling comfortable in your skin, and that comes from within. She said, "That’s when something clicked in my brain: I have to do whatever is good for me…"

When she covered the April 2013 issue of Harper's Bazaar Arabia, Jenner opened up about being criticized for being too skinny. "What people don't understand is that calling someone too skinny is the same as calling someone too fat, it's not a nice feeling." Sure, society is far more accepting of those who are underweight rather than overweight, but she touches on something worthwhile here. Attacking someone's body is damaging to their self-esteem, and it shouldn't happen in any form.

For many ladies pregnancy can be challenging for body image. Kourtney proved she isn't one of them when she posed for DuJour magazine in December 2014... while pregnant with her third baby. "What appeals to me is celebrating the shape of my body being pregnant and capturing that time in my life..." Kourtney said. Rather than being embarrassed of her changing body during gestation, she continues, "It's such an amazing feeling, the transformation that your body goes through. There's something about that that's so empowering and beautiful [about being pregnant], and I just really embrace it."

In June of 2014, Kris posted the above bikini selfie taken while on the vacation in the Mediterranean. No #skinnydays. No body image problems. Just herself in a bathing suit.

At face value, Jenner identifying herself as a DUFF (designated ugly fat friend) can be taken as a mocking move. But it's possible that making a statement against how culture devalues women who don't fit mainstream beauty standards. However, as our own Marie Southard Ospina pointed out in a thoughtful piece, Jenner's shirt can be interpreted as an attempt to reclaim the term. Rather than condescending, that would make Jenner a pretty cool girl.