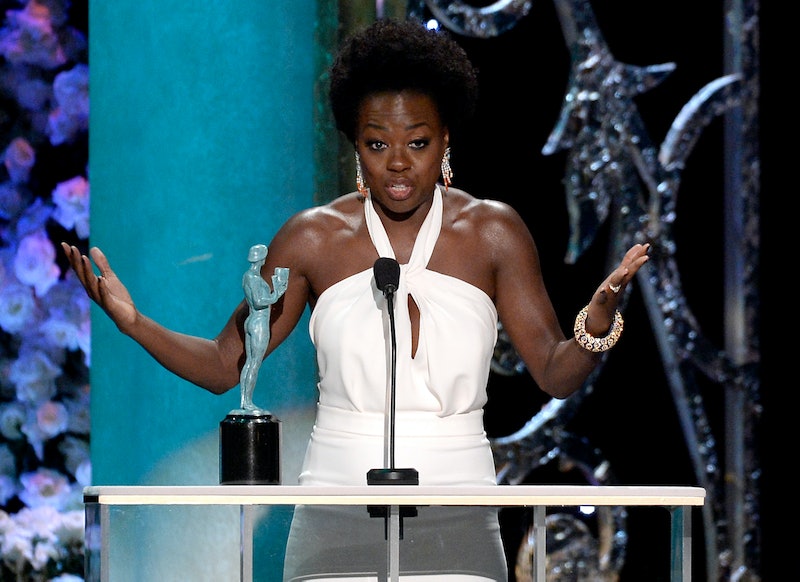 On Sunday night, we were all treated to the hidden gem that was the Screen Actors Guild Awards. Bracketed by the 2015 Golden Globes and the 2015 Oscars, the SAG Awards geared toward the former more than the latter in terms of diversity and representation — thank goodness. The race for Female Actor In Drama Series was pretty stiff, and I honestly couldn't decide between two of my favorite actresses. Viola Davis has been killing it as Annalise Keating on How to Get Away With Murder and Orphan Black's Tatiana Maslany was forced to suffer the indignity of yet another snub at the Golden Globes already. Who ended up coming out on top? It was Davis who won the SAG Award for Female Actor and, even more importantly, she took the stage to give a speech about diversity and ageism that truly warmed the heart.

Beating out Claire Danes (Homeland), Julianna Margulies (The Good Wife), Tatiana Maslany (Orphan Black), Maggie Smith (Downton Abbey), and Robin Wright (House of Cards) is not exactly an easy feat, but there are a multitude of reasons for why Davis deserved this honor over everyone else in the category. In fact, some of those reasons were in her speech. After thanking writers and directors, including, of course, Shonda Rhimes, she clarified that she was thanking them for "thinking that a sexualized, messy, mysterious woman could be a 49 year old dark-skinned African American woman who looks like me."

As nice as it would have been for Maslany to take home a SAG Award, I can no longer imagine anyone but Davis holding that trophy. It's a victory for people of color, it's a victory for actors who aren't "fresh-faced and in their 20's", and it's a victory for Davis, who deserves the honor and used it as a platform to highlight this important issue.