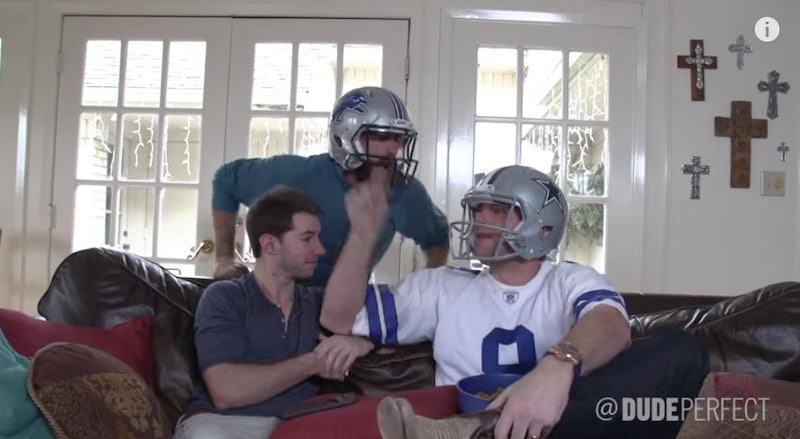 If you're at all interested in football, you're probably already busy making your plans for Super Bowl Sunday. Heck, even if you're not into football, you're probably already busy making you plans for Super Bowl Sunday, so here's a PSA for everyone: Be sure to watch out for all the types of people you'll meet at whatever Super Bowl party you happen to attend. Seriously, you guys. It's a jungle out there, and it's full of pigskin, pizza, beer, and people screaming at 48-inch plasma screen televisions.

"Stereotypes: Super Bowl Party" is the latest installment of Dude Perfect's popular "Stereotypes" web series. Lambasting everything from the folks you see at movie theaters to the kinds of people who play golf in their spare time, "Stereotypes" acts almost like a human-focused version of a David Attenborough nature documentary. Although the Super Bowl video specifically — and Dude Perfect in general — mostly seems to be aimed at guys (it is called Dude Perfect, after all), the types of people seen here are definitely not limited to one gender. We all know people like this; in fact, I'm willing to be that most of us probably manifest the qualities seen in at least one or two of them ourselves from time to time. No matter who it is, though, it can't hurt to be prepared for what you're about to experience when you walk into this year's Super Bowl party, right?

Check out seven of my favorites; scroll down to watch the whole video:

There will always be at least two of them, they will never support the same team, and they will spend the entire game yelling at each other — probably while you're sitting on the couch trapped between them.

2. The Person Who Doesn't Understand Football at All

I'd like to take this moment to point out that this person can be either male or female. I kind of feel like it might possibly have been a better idea not to illustrate this one with a woman... but maybe that's just me. In any event, though, this person will ask an endless array of questions and talk over all the important plays, which will make everyone who's actually invested in the game want to hit them with a pillow.

3. The One Who's Only In It for the Commercials

I've already remarked today that I don't usually choose to watch the Super Bowl... but when I do, this is definitely me. To anyone who has ever watched the Super Bowl while I've been in the room with them: I'm sorry.

...But even though I'm The Commercial Obssessee, at least I recognize that Super Bowl parties are supposed to bring people together. If you're going to go to someone's shindig, at least stick around for more than the amount of time required to talk a selfie. Your host has probably gone to a lot of trouble to make sure there's enough food and drink for everyone who RSVP'd yes; don't make them spend money in vain.

5. The One Who's Only In It for the Halftime Show

This person will probably spend the entire rest of the night ignoring everyone else and tapping away at his or her phone. When halftime comes along, though? It's like someone hit a switch, and Katy Perry (or whoever the headliner is for the year) exploded out of it.

No one knows this guy (or gal). He just shows up, hogs the couch, eats all the food, drinks all the beer, and leaves. Who are these people? Where do they come from? Is there a secret island somewhere that breeds party crashers before unleashing them upon the world? We may never know.

7. The Person Who Brings Nothing and Consumes Everything

I have a special word in my verbal arsenal for people like this. It's not meant for polite company.

Watch the full video to see all of 'em, including the Depressed Pizza Guy, the Rage Monster, the Lone Veggie Platter, and more: