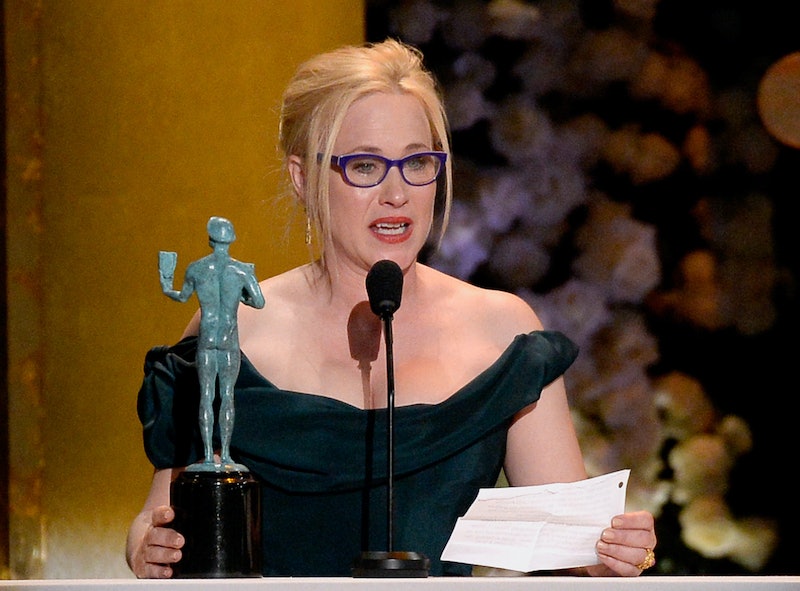 We're in the full swing of award season now, and if you are really into keeping track of your favorite TV shows, films, and actors, surely you tuned in for the Screen Actors Guild awards on Sunday, Jan. 25. Well, when it came to one of the biggest acting categories of the night, Outstanding Performance by an Actress in a Supporting Role, Patricia Arquette took home the little green actor with the perky butt for her role inBoyhood.

The actress was up against a talented group of women including Keira Knightley for The Imitation Game, Emma Stone for Birdman, Meryl Streep for Into The Woods, and Naomi Watts for St. Vincent. In fact, Arquette faced off against three of these women, Knightley, Stone, and Streep, at the Golden Globes and will be up against them again at the Oscars with the addition of Laura Dern for her role in Wild.

Arquette accepted her award through teary eyes and started by saying, "I can't tell you what this means to me. I'm a fourth generation actor." She then went on to explain how her family made it clear to her how trying a career acting can be. Arquette also thanked her fellow cast members and director Richard Linklater for "showing me the beauty of this human experience and how we all matter."

Now it's on to the Oscars for the Boyhood star. Will she take home the Academy award as well? You'll have to tune in on Feb. 22, but it sure seems like there's a good chance.