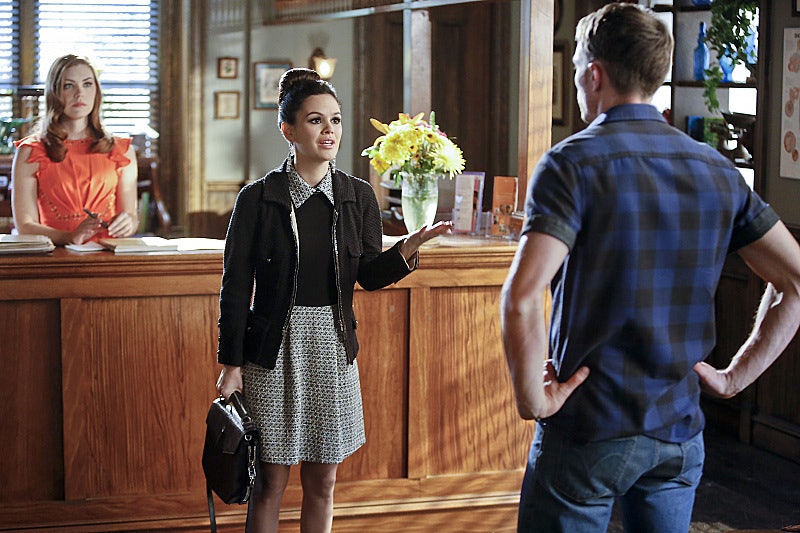 The third season finale of Hart of Dixie was a doozy. Zoe finally admits she loves Wade, in between hiccups, and then really professes her love for Wade at Meatball and Lily Anne's wedding. If life were fair, the two of them would then disappear into the sunset — but life's not fair. However, The CW does have a chance to make Hart of Dixie Season 4 really fair.

Still, in the Season 3 finale, Wade is super nonchalant about Zoe's declaration and still very much moving to Atlanta and all hopes of happiness for these two are quickly dashed. But wait! Wade then shows up at Brando and Sylvia's wedding (because sometimes one wedding in an episode just isn't enough) and he and Zoe share a dance. He tells her not to read too much into his decision to stay in Bluebell. She, meanwhile, tells him that they have a future together, and she's going to prove it to him, and she's not giving up. Then she walks out of the wedding reception (like a boss). So, when Season 4 picks up, will Zoe and Wade be back together?

For the past few months, there has been growing speculation as to whether Rachel Bilson's real life pregnancy would be written into the show. The show creators stated that their plan was always to give Zoe Hart a bundle of joy, and according to CW President Mark Pedowitz that time is mostly like Season 4. Besides, there's no getting around the fact that Bilson is quite pregnant during filming, and there's nothing more distracting than a TV show using over sized bags and refrigerator doors to hide a growing baby bump. That's not a gimmick Dixie would fall for.

Still, we don't yet have a definitive confirmation on Zoe's could-be pregnancy and I'm really looking for a very firm "yet" or a definitive "no." Is that so much to ask? Not a very vague "this was also going to happen we just aren't going to tell you when!" According to E! News, a new doctor joined the Season 4 cast, and she's set to make her first appearance in the sixth episode. But that's still not a solid confirmation of any upcoming 'lil bundles of joy.

And worse still, it's not an indication of whether or not Wade and Zoe are going to be back together. The baby needs a dad (unless they're going a completely different direction), and I don't think it'll be Joel's. The timing wouldn't be right. Assuming that Zoe is pregnant on-screen (because, she probably is), what does this mean about her relationship with Wade? And more importantly, will be he the father?

Depending on when the season picks up (which, The CW is still mum about), he and Zoe might have rekindled their everlasting love once and for all and settled down. Maybe there's a six month time jump from last season's finale to the first episode of the fourth season. (Lemon will also be back from her cruise — the timeline should just revolve around Lemon. Seriously though. Since Season 4 will probably Hart of Dixie's last, CW should look into a Lemon spin-off. Just an idea, Lemon decides she wants to practice law, gets her law degree, opens up a practice, and the show is called LEMON LAW.) Anyway...

The upcoming season is only going to be ten episodes long (most likely to adapt to Bilson's pregnancy). and Hart of Dixie won't return until mid-season according to Zap2It, which I guess is because the CW wants to watch us squirm for a while. Guys, 2015 is four months away, and Dixie's return could be even further away than that. It's cruel to make us wait this long for new episodes, so firm spoilers from the set would be wonderful, CW. We're even willing to bargain.

Confirm (or outright deny) Zoe's pregnancy for the new season, and we'll hold off speculating about everything else in Bluebell... at least until January.