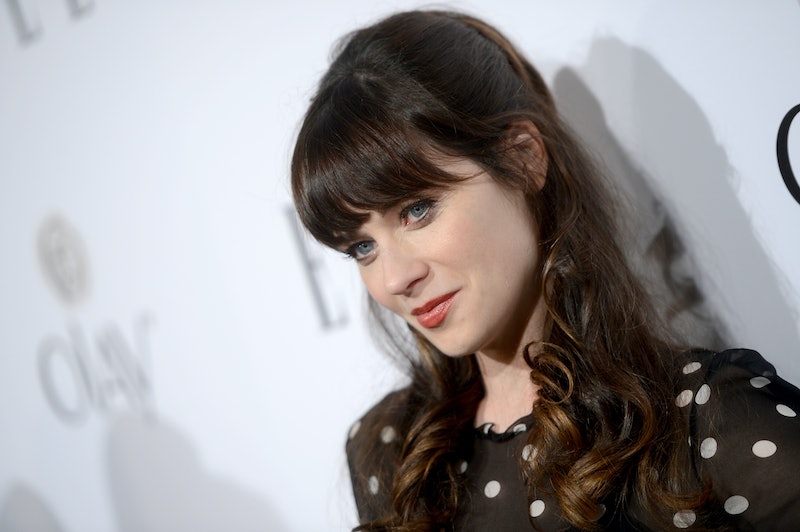 I fancy myself similar to Zooey Deschanel for a few reasons: 1. We both like dresses, 2. We both have brown hair and porcelain doll skin, and 3. We've both capitalized on the fact that thick, dark-framed glasses are now super cool instead of super nerdy. Okay, so maybe that last point makes me more like Jessica Day, her character on New Girl, but still. I'm a Zooey fan! Which means I was delighted by the news that Deschanel is not only pregnant with her (sure to be adorkable) first child, but is also engaged to the baby's father, Jacob Pechenik. As someone who's into beauty and style, my first thought when I hear the word "engagement" is always, "Where's the ring???" And it seems that Zooey Deschanel may already have an engagement ring that she's been wearing for awhile now.

Despite the fact that Us Weekly only confirmed the news of Deschanel and Pechenik's engagement on January 21st, several celebrity news outlets are drawing attention to a photo from December 7th, 2014 in which you can see the She & Him frontwoman sporting an itty bitty (possibly heart-shaped) diamond ring on her left finger. The delicate little jewel is SO Zooey, and it certainly wouldn't surprise me if the ultra-feminine actress and singer opted to literally wear her heart on her hand during her engagement.

Here's the photo in question. Click on over to Racked for a close-up.

That little gem is so precious that I might be almost — almost — ready to move on from Deschanel's failed marriage to Death Cab for Cutie singer Ben Gibbard. ALMOST.