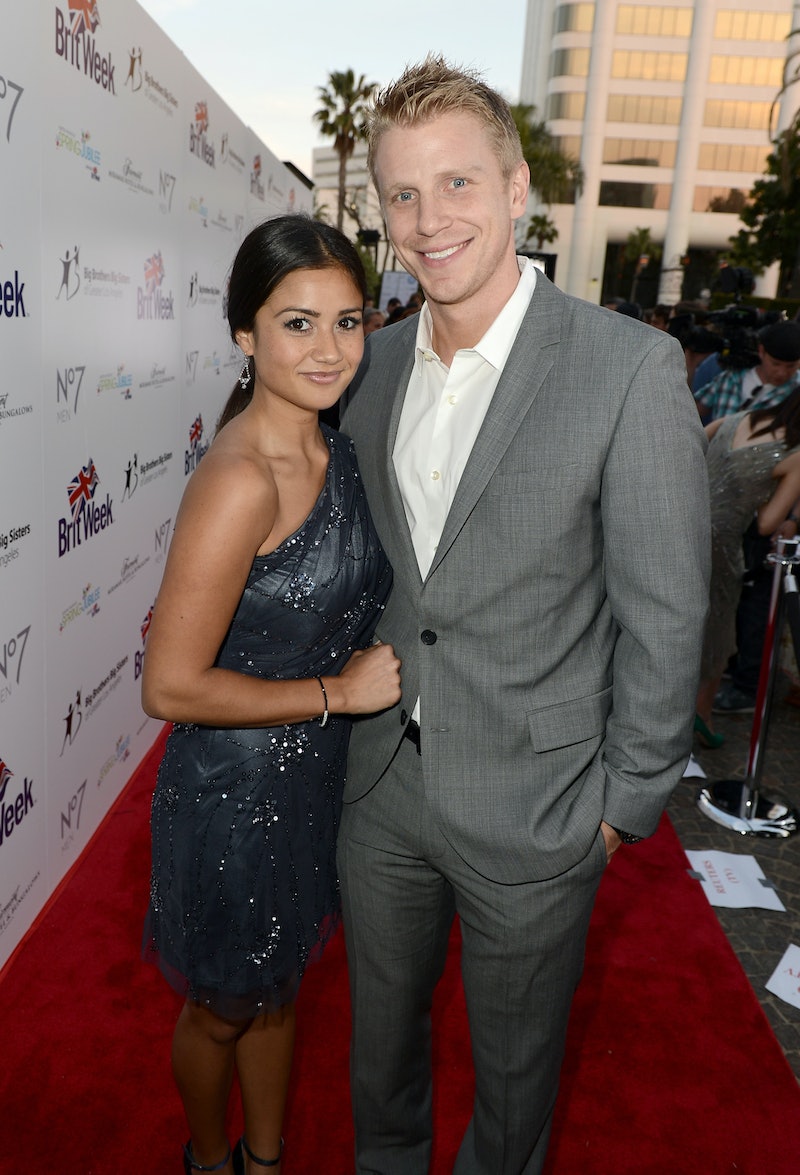 It was just over a year ago that Bachelor Sean Lowe married contestant Catherine Guidici in a live ABC event complete with commercials during the ceremony. But if you thought that the pair was always meant to be, Lowe's memoir For the Right Reasons has some news for you: Things weren't always hunky dory between the two of them. In fact, his book reveals all the times Sean and Catherine almost broke up, and how if only a few things would have been different, they might not have made it down the aisle.

On night one, Catherine captured his attention from the get go. Lowe wrote of her limo exit, "There was something really quirky and funny about her, which I also liked." But although they got off to a good start, it wasn't always smooth sailing for the couple. Lowe doubted her interest in him multiple times and the night before his proposal almost decided not to go with her after all because he was concerned her dedication to faith wasn't as strong as his.

In the end they did get married, of course. In a beautiful ceremony with a "Grown Sexy" theme (whatever that meant). But since they're so in love today, it makes it all that much more fun to look back at all the things that almost went wrong and could have kept them apart. It just goes to show that sometimes you find love just because a sequence of events happened to work out the right way.

When There Was No Connection During a Group Date

Catherine tagged along for Sean's roller derby date, but he was concerned that maybe she wasn't that interested in him. He writes of their time spent chatting and how he tried to send her signals that she apparently wasn't getting or returning.

While we were chatting I put my hand on her knee to send a message: I'm interested in you. However she didn't reciprocate. She acted nervous and—to be honest—kind of weird. Does this girl even like me? I wondered ... Catherine was really hard to read, which left me with a lot of questions.

Sean handed Catherine a coveted one-on-one date to a wintery mountain, but was apprehensive before the date even started. "I was ready to find a partner I could see myself with for a lifetime. Could Catherine be that person? I doubted it but was excited about exploring the opportunity."

He had a pretty bad attitude if he was going into all his one-on-ones with doubt in his mind. Good thing he explored the opportunity anyway.

When the Hometown Date Went Awry

Catherine's hometown date was supposed to solidify her relationship with Sean, but instead it added a million more questions. Her sisters cornered Sean and essentially told him that Catherine wasn't ready to settle down and that her career was still more important to her than men. Then when Sean asked for her mother's blessing should he end up proposing, Mama Guidici simply said, "We'll see what happens." Yikes. It's a wonder these two made it off the show as a couple, never mind down the actual aisle.

When it Came Down to Catherine or Des

After the hometown dates Sean knew he wanted to keep AshLee and Lindsay, but was unsure about Des and Catherine — in fact, he almost sent his future wife home. Even the producers were telling him that he and Des made more sense together. The thing that saved Catherine in the end? Sean says, "I could see myself saying good-bye to Des, but I was not ready to say good-bye to Catherine." That's right, folks. It was just a gut feeling.

When They Were Really, Really Different

Sean wrote in his book:

I really liked Catherine, but she was a Birkenstock-wearing, vegan food blogger from Seattle. I was a meat eater who'd worked in the oil and gas industry. She came from a Filipino culture. My family was a bunch of Texans. How could that possibly work out?

Well let me tell you how, Sean. Oppostites attract. That's how.

When He Had Late-Night Second Thoughts

The night before his proposal, Sean suddenly panicked that Catherine wasn't as invested in faith as he was. "What did I really know about Catherine's faith?" he questioned. "Was she a Christian? Was she serious about faith?" A confused Sean begged producers to let him have a late-night chat with Catherine about her values before he could propose to her in the morning.

They relented after making him promise not to give away his proposal plans. Catherine told Sean that she wanted to be the woman in his life who supported him through his faith, and things went forward as planned. But that was a narrow miss.

When Sean Took on Dancing With the Stars

Even after all the drama unfolded on screen and Catherine and Sean were allowed together in public, it wasn't all smooth sailing. When Sean was offered a spot on Dancing With the Stars he moved to Los Angeles and Catherine followed, even quitting her job and leaving her life behind in Seattle. But soon his long practice hours and the fact that she had nothing to occupy her time wore thin on Catherine's nerves.

"We just got out of a hard time of life. Remember? The Bachelor? That wasn't easy either," Catherine said one day. "We kept saying that once it was over, we could live like normal people. Well, this isn't normal!"

Fortunately DWTS was not the deal breaker for their relationship and with time they worked through their issues and grew stronger. Sean Lowe has always been insistent that marriage isn't easy, but he and Catherine were willing to keep the faith and work through their hard times which is probably why they're still so cute and so much in love today, one year after their wedding.

For the Right Reasons is out now.